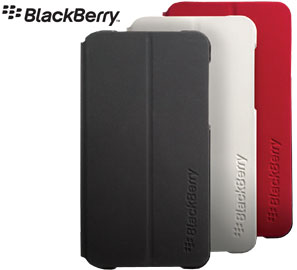 For the past 3-4 weeks I’ve been using the Blackberry Z10 as my main secondary phone. Unlike my iPhone 5 I didn’t feel obligated to run out and get cases for it. In fact, I toyed with the idea of never getting a case. The textured back of the Z10 feels sturdy and good in my hands and I felt it was fine staying naked.

When the awesome people over at Mobilefun offered me to pick a case to review, admittedly I couldn’t decide. The case I originally chose was out of stock – blessing in disguise.

What I ended up getting was an official Blackberry Transform Shell. As expected the case is smooth to the touch and doesn’t add much extra bulk to the Z10. Even though the case is plastic its sturdy with extra reinforcement around the corners. The gotcha is that half the case flips out into a kickstand.

When flipping out the kickstand portion of the case it’s sufficiently stiff. After several uses the hinge doesn’t appear to loosen so I don’t feel like it will eventually become useless. Since the graphics on the Z10 are so fluid and great for viewing movies and videos in landscape mode.

The Blackberry Transform Shell is available in Red, Black and White for $20.49 over at Mobilefun.com. Where the Blackberry Z10 doesn’t really need a case – this is definitely a worthwhile investment.