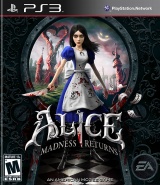 Alice Madness Returns is an action game that combines platform and third person shooters. This game is a sequel to American McGee’s Alice for the PC. You  play as Alice but now older and more gloomy than ever. Though she left the Asylm she now resides at a psychiatric clinic/ orphanage. There she struggles through her daily life against a gritty London landscape that reminds me of the era of Sweeny Todd. The graphics are impeccable whether you are in a darkened alley following the white cat or floating on air gliding above mushrooms in an ethereal Wonderland. Wonderland itself becomes its own supporting character as the actions you take in the real world soon take hold of what’s left of Alice’s imaginary realm.

Game mechanics are pretty simple, Alice moves smoothly from one sequence to the next. You acquire an array of weapons at your disposal making Alice into a lethal combatant against the chaotic creatures. Deal out killer combos with your Vorpal Blade, knock out enemies with the Hobby Horse or douse your assailants from a distance using your Teapot Cannon! Maneuvering around Wonderland is both fascinating and fluid. You scale obstacles and float with your basic, double and triple jumps. There’s also a shrinking ability that becomes very important throughout your exploration. Shrink Mode allows you to fit in the smallest of places and see clues which lead you to secret rooms.

The game recaps pieces of the previous Alice to fill in players that haven’t played the first game. All the while veteran Alice fans will notice extra hints to aspects of the previous game and how Wonderland has been changed as a result.  Alice’s fight to maintain her sanity and discover the truth behind her family’s death takes her on a rocky adventure where she meets various characters and travels from the unsavory underbelly of London to the posh abodes of the upper class. All the while rediscovering old friends and fiends reacting to her mental and emotional struggle. Alice’s only hope of survival in the grim and perilous Wonderland is to find the truth behind her family’s demise and defeat the source of corruption infecting Wonderland before it’s too late.

The game was released in two different ways. One as an online download via the PSN network and game disk. I played the PS3 game disk which included the original American McGee’s Alice, reformatted for the PS3. I recommend you play this version as you can truly experience both stories. Also due to the graphic language and gore I strongly recommend this game for adult players. Though this is an Alice in Wonderland inspired story this is not your old school kids safe version.