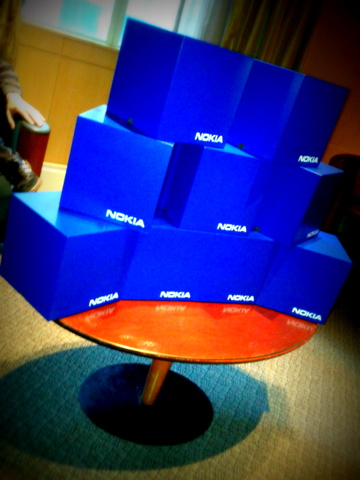 If you’re over 28, you may remember when Nokia was king of the mobile world. I certainly remember being in high school and college proudly sporting my Nokia phone(s). But that was back in the late 90s and very 2000s. Then they fell off the radar (at least in the US) and fell hard. Even being a gadget geek for a good few years I wasn’t even sure they were in business still.

What happened? Well there’s a lot of opinions about that, I’m just glad to say “welcome back Nokia”. I started once again taking a good look at what Nokia was doing in 2011 with the release of the Nokia N8 overseas. I was lucky to get a hold of one. Though still I had my doubts that Nokia could make a come back due to their use of the os Symbian. Though I saw a lot of great points about the model so I paid attention to what was in the near future for Nokia. In late 2011, that was the release of the Nokia Lumia 800. It was such a seek, user friendly device plus it was a Windows os.

During 2012 CES (Consumer Electronic Showcase), Nokia had a huge press push for the spring launch of the Lumia 900. This is a seek, multi-media focused, Windows phone. Immediately, in the tech community many of us wanted to at least try out the phone. We had to wait though until spring of 2012 to get it in our hands. I, was happily chosen by Nokia to be apart of their larger then life official launch of the Lumia 900, right in the heart of Times Square in New York City, Friday, April 6, 2012. The exact details of the launch were kept secret from the featured bloggers chosen. We were whisked off to Millienuim Hotel where after breakfast we were taken to a private “blue box experience” which was lunch then a meeting to receive our first clue to what the day held.

The large blue box held a countdown clock and Monster Purity headphones with a note saying that when the countdown clock was done we’re getting the rest of the surprise. The surprise ended up being VIP access to the launch event with was a concert in Times Square by Nicki Minaj and we received a signed (by Nicki) Nokia Lumia 900. It was probably one of the best product launches in the tech industry I’ve been a apart of.

Since then I’ve been using the Lumia 900 for pretty much everything. This phone is really jammed packed with features. It is a great user experience, very quick to learn and easy to use for the multi-tasking folks like myself. The only user experience downfall I have found is lack of apps offered so far in the Windows app market. If you’re a gamer though, no worries with XBox live built into the phone. Music lovers will appreciate the built in Zune feature. I’m eagerly waiting the addition of Instagram app to make this a great phone since I use that app a lot. Offered through AT&T for only $99 with contract, this phone is defintely worth picking up. Yes, I would have actually paid for this if it hadn’t been given to me. Great for multitasking, professionals, music lovers, multimedia creators and gamers. It is all around a big come back for Nokia. Then add the matching Monster Purity headphones for a well made audio experience.

For the social mobile user, the built-in features of Windows Phone are excellent. Threaded messaging is by far my favorite, as it lets you conduct conversations with friends over a variety of formats (Facebook chat, text, Windows Live messenger) all from one unified stream. For many of the apps you love most, they are available (Facebook, Twitter, LinkedIn, Foursquare) and for the ones that are not currently ready there are many third party or “like” minded apps. Local Scout, powered by Bing, is an alternative to Yelp, and the People and Me hubs is great for social networking.

As for battery power, it can go a regular work day with normal use before a charge is needed. Nokia posts five-six hours with heavy use and that’s on the 4G LTE network. With most of us already use to the charging our phone mid way through the day, this doesn’t seem an issue. Take Away
I say if you have a phone over a year old, this is a good phone to change over to. Coming from having an iPhone 4/4S or a newer Android, this wouldn’t be an upgrade but it is still a good mobile choice. The only downfall I could really find in hardware is the camera, that photos aren’t that great (I think the N8 took much better pics) and the screen has pixelated resolution issues. This isn’t a big deal to the normal mobile user. I didn’t even really notice it until a graphic designer actually pointed it out to me.

So overall, I say go for this phone is you want a one touch user experience and a fluid social use. The audio (call and music/video) is awesome. The video capture is great and media is easy to share. Like mentioned, gamers will love this phone (XBox Live integration) and music artists (video playback and Zune integration). At the price point of $99 with 4G LTE, it’s worth every minute of your mobile life. The Nokai Lumia 900 is sleek and thin, with camera and power and volume buttons all on right side.