Focusrite Launches iTrack Solo: The Must Have Audio Interface 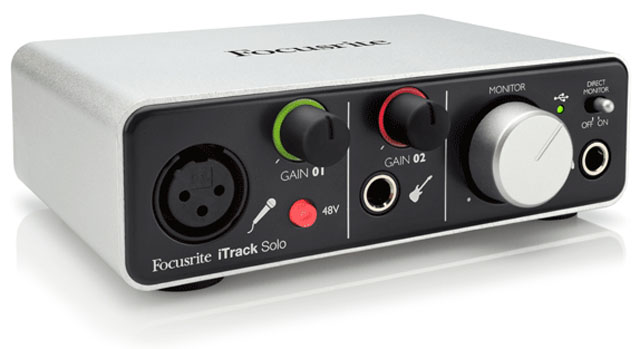 Growing up as a musician and songwriter it was nearly impossible to find a cost effective studio and/or equipment to make a demo, record a song or even put finishing touches on a final mix. Fast forward many years later and now a mother of a songwriter/musician it’s difficult to navigate through the sea of apps, plug-ins, adapters; etc without wasting a lot of time and money. In a world of manufactured sound how can one stay true to instrumentation without compromising the creative process? Simple – Focusrite’s iTrack Solo. Aside from the fact that it takes up minimal space and is extremely portable the iTrack Solo sports a rugged metal unibody case that’s as easy on the eyes as it is durable so any musician can feel safe “rockin’ out”. Even though it is being marketed as Made for iPad the iTrack Solo is fully compatible with all generation iPads as well as Mac and PC (Windows 7 & 8).

The preamp design should look familiar if you’re not a stranger to Focusrite’s impressive catalog of audio interfaces. The iTrack Solo touts the same design as the Scarlett and Saffire audio interfaces which are both used and trusted worldwide by top musicians.

Worried about waking the neighbors when you have a middle of the night stroke of genius? With the Direct Monitor Function with a simple flick of the switch you can hear what you are recording through your headphones as well as your speakers without the signal to channel through your iPad or Mac/PC. This helps avoid the possibility of slight time delays (latency) that can result from whatever music app you may be using- a definite killjoy while you’re recording. The addition of the signal halos – genius. While you’re recording if the halo turns RED –stop your level isn’t optimum as it’s too loud and clipping. Green- you’re good to go. If you happen to get a red signal simply reduce the gain using the knob until the halo returns to green.

The included software is compatible with all major digital audio workstations (DAWs) so no worries if you don’t have Garageband. The iTrack Solo is perfect for both beginners and seasoned music professionals. If you’re worried about it being hard to use – don’t be it truly is as simple as it sounds. Focusrite always supplies awesome step by step instructions, tutorial videos and staff to answer any questions you may come up with. In conclusion, this is a worthwhile purchase- you can pick up the iTrack Solo for MSRP $199.99 or $159.99 at dealers.