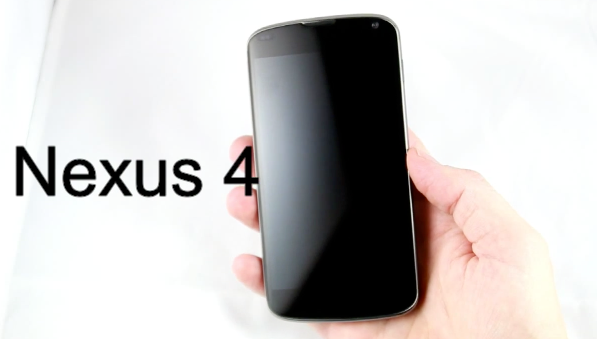 Google and LG confirmed today the long leaked Nexus 4 smartphone, which will run on Android 4.2 (yes you heard correctly).

The Nexus 4 is the first Nexus device built by LG, with Google looking to expand its partnerships.

The Nexus 4 is an altered version of LG’s flagship Optimus G smartphone. I was able to play around with the Optimus G at an AT&T event and was really impressed, screen is nice and bright, it has a smooth flow to when swiping through apps.

The phone is one of the first with Qualcomm’s quad-core Snapdragon processor, 2 gigabytes of RAM, features a true high-definition 4.7-inch, starting to see a trend with smarth phones getting larger and larger, IPS Plus display, and a 3G connection. Unfortunately, a 4G LTE model isn’t yet available yes I know it’s disappointing to hear let’s hope they will have one soon, I’m pretty much use to AT&T’s 4G and wouldn’t want to go back to 3G.

An 8GB and 16 GB version of the smartphone will be available for sale in the Google Play store on Nov. 13 in the U.S., U.K., Canada, Germany, France, Spain, and Australia. Offline availability in Europe, Central/South Americas, Asia, and the Middle East will begin at the end of November.

As soon as I get more information I will let you guys know.