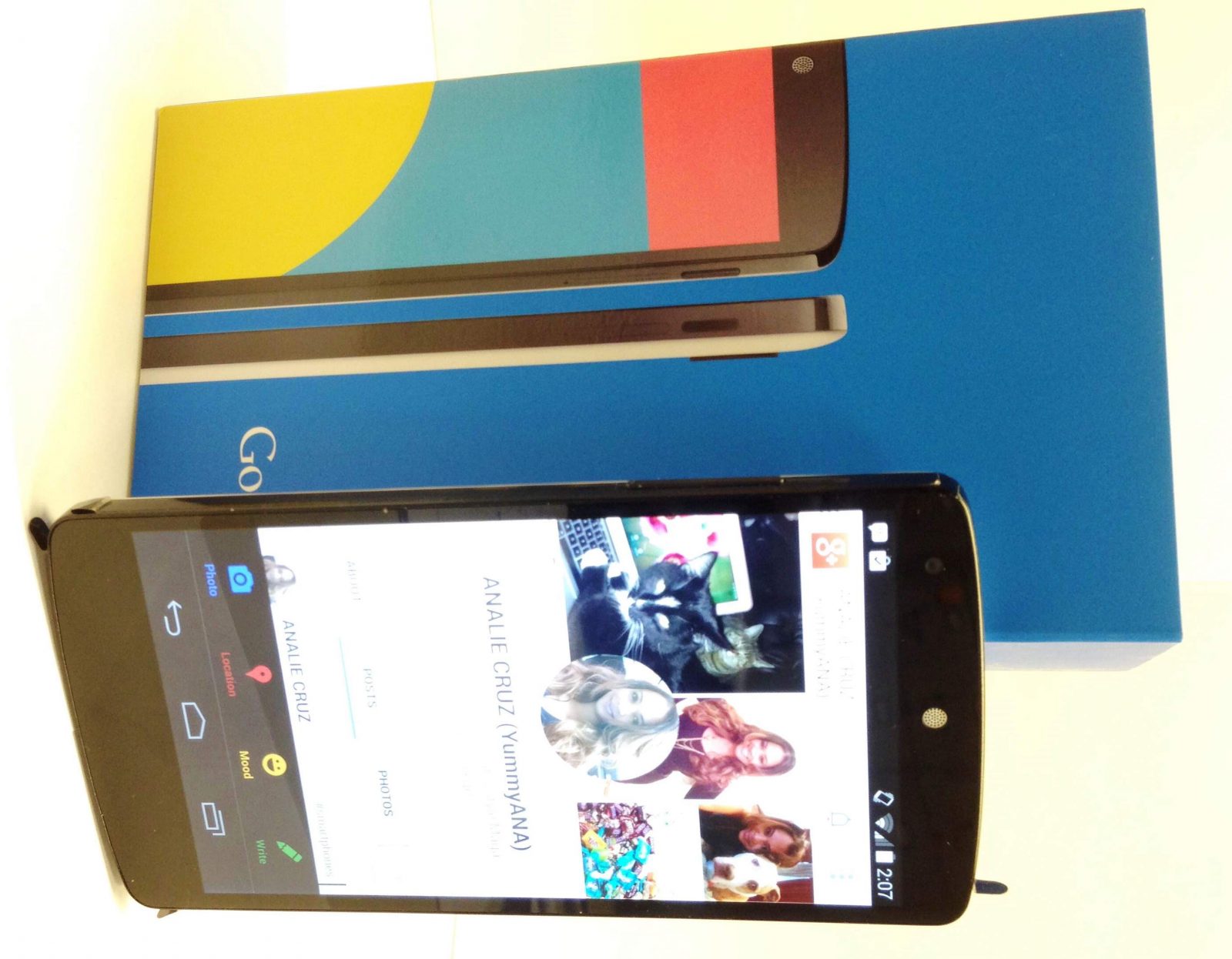 Facebook Twitter Pinterest Email
Two weeks after the launch I've gotten to know the Nexus 5 pretty well. Here's what I think about it so far. Ladies, are you looking into this phone?

There are so many phones so little time. With companies releasing phones one day after the next, they are all trying to differentiate their flagship from the other with a killer features list. Regardless of what all the phones are offering, the Google Nexus 5 smartphone was highly anticipated. After a couple of weeks with the phone, I am ready to give an informed review. Let me tell you that this phone is all about the “less is more” rule. The black and white version is simple looking on both sides. All black in the front, all white back is a nice two-tone combo. The earpiece grill is white. I honestly don’t like it against the black. But’s that’s just a minor issue. The ring around the camera is the statement piece of the phone. The Nexus 5 looks very plain next to other Android flagships. But it wasn’t a bad thing. The phone is so lightweight. It isn’t as large as the Samsung Galaxy series. The build and body design isn’t awkward. Falls nearly perfectly in place. Doesn’t feel as comfortable as the Moto X, but not bad at all. The edges of the phone are slightly raised. Should help when putting the phone face down on the screen, not to scuff easily. The buttons are all within reach. Some might complain about the fingerprints on the phone, but really it’s a touch screen phone with a glass screen. Get real! Otherwise, good layout overall. I use the phone with one hand comfortably without fe I simply love the glass screen on the Nexus 5. It gives it the oomph it needs. Shiny and attractive. The colors are natural on the full HD (1920 x 1080) display. There is no oversaturation. My eyes don’t strain after looking at the screen for an extended period of time. It looks beautiful when scrolling through screens and when doing basic phones things such as texting, web surfing. It has good viewing angles as well. Outdoor visibility on the Nexus 5 screen is great. Speaking of using the phone, most of you are already aware that Android KitKat 4.4 was released with the Nexus 5. For those that aren’t aware, it’s the latest version of the (Google) software on the phones. This is another reason that people were going crazy for the device. I was excited as well. It’s been a while since I used stock android on a phone. I’ve recently started using the Nexus 7 (2013 edition). Experience with the Nexus 5

The experience on the Nexus 5 is quite nice. It has a nice welcoming tutorial to walk you through KitKat. It’s not an annoying tutorial, just quick tips and info on where to find things and how to do certain things. Zipping through the screens and just looking around I realized how quick the phone is. I thought it was just because I didn’t have any apps downloaded. But after several days and lots of data later, the Nexus was still smooth. 2 GB of RAM minus bloatware equals win!

One of the major changes on the Nexus 5 is how Google Now is used. If you swipe to the left screen you will find all your information there. You can use your voice to navigate Google Now by saying “OK Google”, but only on the Google Now screen. Many are excited the Google Wallet can’t be blocked by carriers. Another win. Yay! I will say that the camera didn’t satisfy like other smartphone cameras do. Google is supposed to release a fix for it. Unless sharing the pictures over a high resolution screen you wouldn’t always notice the washed out colors. For social media purposes the pictures came out fine. I am having fun trying to get cool Photo-sphere (a 360 degree panorama picture mode) pictures though. That’s one of the things I’ve been waiting to try out. But there are no features like the other flagship phones have put out. The camera is not bad, it’s not great either. The Nexus 5 is a great phone at an affordable price. But this device is more about efficiency and improvements under the hood than anything else. But it’s nice to get the latest and greatest from Android. And I can see what the hype is about. You can get the Nexus 5 to work on AT&T, Sprint and T-Mobile (Sorry Verizon). For the ladies that enjoy Android features as well as simplicity, they will enjoy the fast running, and efficient Nexus 5. Minimalistic in design but grand in integrated features paired with affordable price, you can’t beat that!

You can purchase the Nexus 5 from Google, Sprint, and T-Mobile