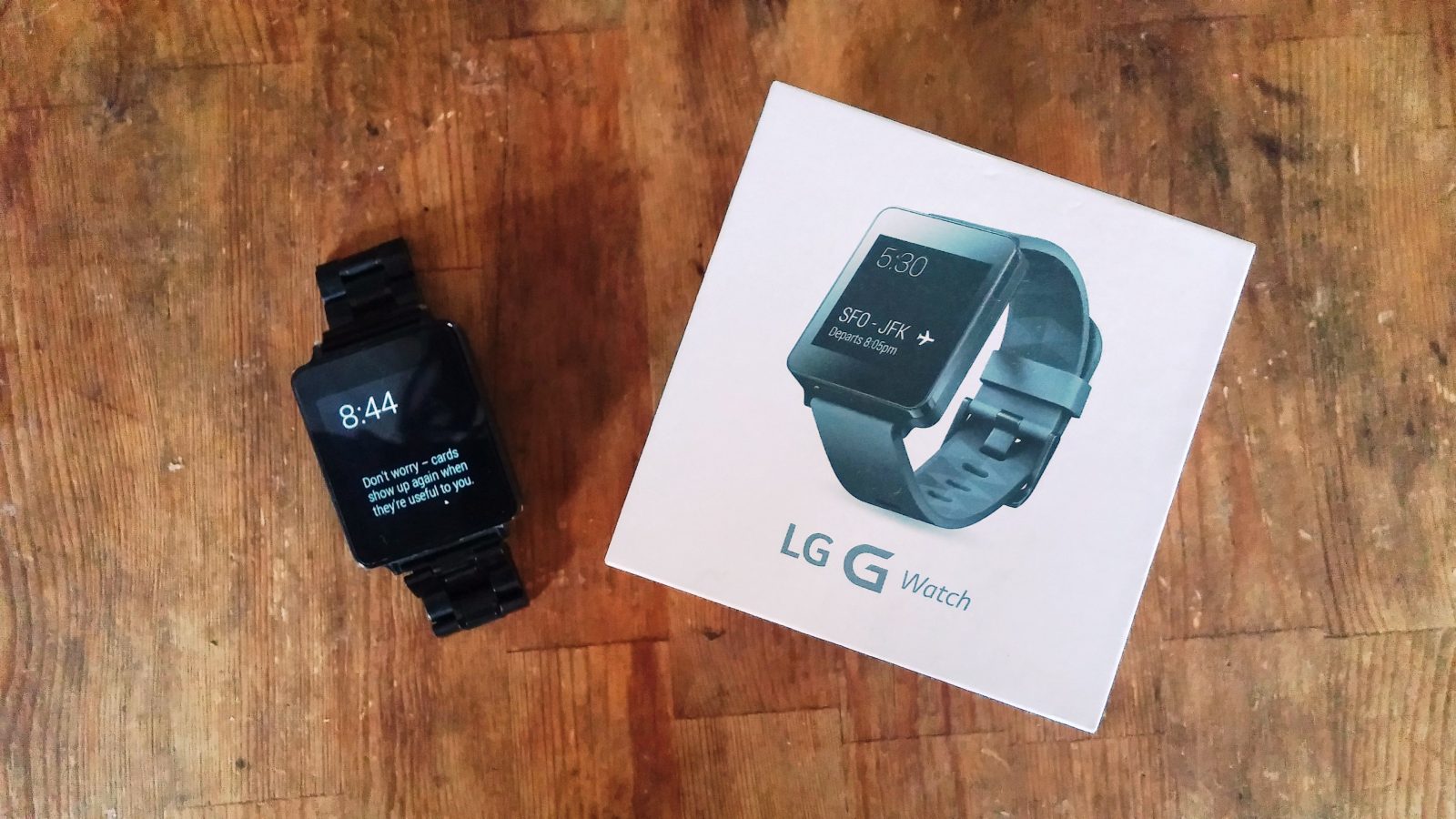 Facebook Twitter Pinterest Email
The LG G Watch is one of the first smartwatches to run Google's Android Wear software. After a few weeks with it, we tell you our thoughts in our review.

As 2014 keeps on progressing we get more and more smartwatches. Today we take a look at one of the most anticipated watches, the LG G Watch. Why were consumers so anxious for this watch? Well because it runs Android Wear. Android Wear is very nice looking and clean. It took me a while to get used to the gestures on the watch, but once you get it..it’s not so bad. You communicate with Android Wear by using the “OK, Google…” command.

LG wasn’t going for a stunning or elegant design when it came to the G Watch. They were going for simplicity, the whole “less is more” technique. I wasn’t very impressed with the design. I have the all black model (there’s a white and gold G Watch as well). There are no visible buttons on the LG G Watch. It’s just a black rectangle with a touch screen. The wristbands are black rubber and that’s pretty much it from the outside. Again, very simple.On the backside of the watch (the side that’s against your rest) you have a very small reset button and the 4 little metal connectors that you align with the charging cradle to charge the G Watch. As simple as it is, the watch is solid and sturdy. It looks like it can take the day-to-day happenings and even a little abuse. Besides the build, the display is the next important thing on the smartwatch. The LCD display on the G Watch is 1.65 inches (280 x 280 resolution / 240 PPI). The display is more than suitable for the small size. But using the watch during the summer, I had trouble viewing the watch on very summer days. The display is bright but not as vivid as Samsung’s Gear 2 display. The 22mm bands on the G Watch are interchangeable. So I decided to change them to make the watch a bit more normal. It was pretty easy to change. You just have to push the pins down to get them out. Putting the new pins takes a bit of patience though. You have to hold the pin down and slide back into the watch face. The basic appeal of a smartwatch is to get the notifications. But it has a few other things that it’s said to do. It counts steps, and have Google at your fingertips (voice commands). You control the G Watch by downloading the Android Wear app form the Google Play Store. That’s where you set up your settings and which apps you get notifications from, etc.

I’ve taken up running and decided to wear the G Watch. The steps are inaccurate.for the most part. It would be good for a few hours, where I would wave my arms around and it wouldn’t count the steps and then other times it would go haywire counting steps. If you run outdoors, I suggest you use the Runtastic app that works very well with Android Wear. The G Watch is rated IP67 water-resistant and dust-resistant, so it should be able to handle your workouts.

Controlling your music and Netflix with the G Watch was pretty great. It’s not always necessary. It did come in handy when I had to charge my phone. Pausing a show is quick and easy. I also used it on the train with music (phone was in my bag and my hands were full). So while it’s not always a necessity, it does come in handy sometimes. I don’t like that you can’t pair with multiple phones. I mean, you can; but you would have to use the reset button on the watch. Many won’t run into this problem since they don’t switch phones often, but those that have multiple Android phones will find this a bit annoying.

The LG G Watch has a 400 mAh battery. It charges with a magnetic cradle that you plug a micro USB port into. You will have to charge this watch along with your phone every night. You can risk charging it every other day, but on day 2 you might get half a day of power (depending on your use of course) For those who are major fans of Google and Google Now, you will enjoy the LG G Watch. It gives you the notifications you need and you have Google at your fingertips. Some developers are coming out with apps that will further enhance your experience. Everything from different watch faces to mini launchers.

If the look doesn’t suite your style, you don’t have much to look into right now. The Gear Live has a bit more of sophistication due to the metal outlining. It runs the same software as well, so you’ll know what to expect. It’s a decent start for Android Wear as there isn’t anything spectacular about the watch. As for getting notifications, the LG G Watch and Android Wear get the job done.