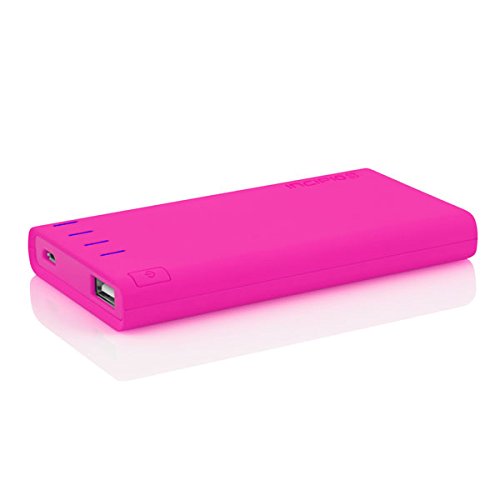 Facebook Twitter Pinterest Email
The Incipio OffGrid Portable Backup Battery is bright and colorful. But does it get the job done? Check out what I thought of the performance.

If you’ve read my reviews on anything that has a rechargeable battery, you know that I carry a portable charger or 2 or 3. It depends where I am going and if I forgot / remembered to charge up the night before. Other times it’s just about having cute accessories. In this post I am checking out the Incipio offGRID Portable Backup Battery.

The material is easy to clean, but it will catch the denim stain or just overall dirt stain after some use. If that bothers you, I suggest you stick to the black model. Can’t go wrong with black anyway. The Incipio OffGrid Portable Backup Battery pack is easy to use. It’s pretty much plug and play right out of the box. Like I said earlier, a micro USB charging cable is included and the battery comes at least 75% charged. Just plug the microUSB cable to to the USB port on the battery pack and the other end into your phone or tablet, press the little button and hold for a few seconds and your device should start charging. If you want to know how much battery you have left, click the button and you will see the indicator lights show up. There are 4 bars (each accounting for 25%) of the battery. This is great for on-the-run occasions, when you might need an extra boost for during the day and you’re carrying one device. Since it’s 4000 mAh it can charge an iPhone 5 / 5S / 6 twice (but you need to get an 8 pin lightning cable). For Android devices, the charge will vary. But for most it will give a full charge or 1.5 times. For example, the Samsung Galaxy S5 has a 2,800 mAh battery; so you’ll definitely get a full charge from the Incipio OffGrid portable backup battery

What’s great about the Incipio OffGrid is that not only does it allow you to charge on the go, but it does it quickly as well.

Like I said it’s great for simple charging needs. If you’re carrying a few devices (phone, tablet and bluetooth headphones), I suggest you get one of Incipio’s larger battery packs. But at $49.99 these are great to gift to the techie in your life or to add to your bag. But I suggest you carry a longer micro USB cable (the one provided is only 6 inches), in case you’d like to leave the battery pack in your bag / pocket while using your device.

You can get the Incipio OffGRID Portable Backup Battery Pack starting at $35 on Amazon.com or Incipio.com