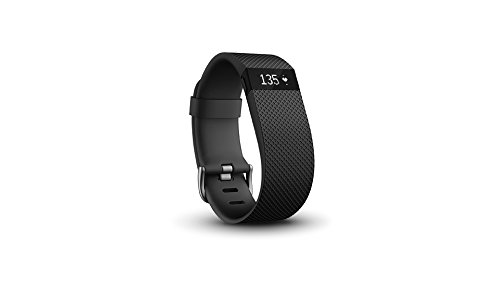 Facebook Twitter Pinterest Email
The Fitbit Charge HR activity tracker hopes to give you a better understanding of your activity with the built-in heart-rate monitor. Check out the review for more details.

If you caught the review of the Fitbit Charge I did a few months ago, you saw how I enjoyed the product and what I thought about it for the features that it offered. I was waiting for Fitbit to release the Charge HR because I knew it was the next step up in helping keep track of activity.

So now I am up to reviewing my third Fitbit activity tracker (I reviewed the Fitbit Flex and the Charge before), so I am pretty familiar with the way Fitbit is set up. I’ve had the app (and a Fitbit tracker) for almost a year now, and it’s one of my daily things.

From a distance the Fitbit Charge HR and Charge look very familiar. But one you get a little closer you can see a few differences. First, the pattern on the band. The Charge HR has lines criss-crossing diagonally. On the Fitbit Charge the lines go down diagonally from right to left. The closure on the band is a buckle. On the Charge, the closure is a metal clasp. The other obvious difference is the heart rate monitor on the backside of the band.It has two blinking green lights. It makes the Charge HR a little bit thicker. The Charge HR is slightly heavier than the Charge, not a noticeable difference. You’d notice only if wearing them at the same time. The buckle is way better than the clasp. The Charge HR has a display that looks identical to the Charge’s display. By now I am used to having an activity tracker, but for those who are not familiar with Fitbit, I suggest you check my previous review as well. Just a quick rundown, the Charge HR has a display. The display shows the time, date, steps taken, your heart rate, distance walked (miles), and stairs climbed.

You can hold down the button (that’s on the left hand side of the screen) to start and stop the timer which will track the stats for that time / workout. The stats are also synced to your Fitbit app via Bluetooth. The point of the stats syncing to the app is to create a log (you create an account on Fitbit.com). With the log you can see your habits and patterns over time. You can log your food intake to give you a better idea of your calorie burn vs your calorie intake. You can also log how much water you drink. The Fitbit app has definitely gotten better over time.

The Caller ID feature is pretty cool, especially when I’m at the office or around the house. I don’t carry my phone around with me and if I get the vibration on my wrist, I know to look for my phone. Would be cool if they had the notification for texts as well. The alert for a call is quick though, you might miss it.

The main feature of the Charge HR is obviously the heart-rate monitor. The heart rate monitor is supposed to help give you an idea of your workout intensity. You’re supposed to use this information to optimize your workout The Fitbit app chooses the level of the heart rate zones based on your age and weight that you put in your profile. But you can also set your custom heart rate zones in the settings. I stuck with the settings the Fitbit app gave me. Fitbit calculates your heart rate by using the formula of 220 minus your age. When clicking in the heart rate tab of the Fitbit app, you get a line graph detailing your resting heart rate for the past 30 days. Fitbit suggests wearing your tracker to bed to get the most accurate resting (when you are still and/or calm) heart rate. below the line graph, the weeks are then broken down by days, starting with the most recent and working your way backward. You see a color-coded line graph letting you know your average resting heart rate and it changes color for the times that it was in the heart rate zones (fat burn, cardio, and peak zones). If you swipe left on the line graph, you get multi-color bar graph detailing the “Minutes in the Heart Rate Zones” in the past 30 days.

Just like the Fitbit Charge and the Fitbit Flex, you can view your stats via the Fitbit app. It’s available on iOS, Android, and Windows Phone. Fitbit recently updated the app, and now you can have multiple Fitbits synced to the app at once. The tracker syncs with the app wirelessly (as long as the Bluetooth on your phone is on). It comes with the USB dongle that syncs the data as well. The Charge HR has to be charged every 5 days. I think that’s a good thing considering that the heart rate monitor is blinking constantly. I would always play it safe and charge it every 4 days. Unfortunately, the Charge HR has a different charging cable than the Charge, and the Fitbit Flex. Be careful not to lose it. Not a fan of the proprietary charging cables.

You can buy the Fitbit Charge HR from Fitbit.com or Amazon.com

I’ve grown used to the Fitbit activity trackers and have enjoyed the growth in specs and quality. The Fitbit Charge HR is so far my fave Fitbit tracker. It has a great display, stats at a glance, and the heart rate monitor for a deeper level of training.

The heart rate monitor is not going to be as accurate as one with a chest strap. So if it’s that important to you, I suggest testing it out for a bit to see if you can deal with the stats the Fitbit gives you. I don’t depend on the heart rate on such a serious level so I am okay with the information it gives me. I enjoy having the Fitbit on and doing challenges with friends. It’s a good form of motivation to just get up on your feet.