Paradigm Comes Out On Top At The SMITE Super Regionals 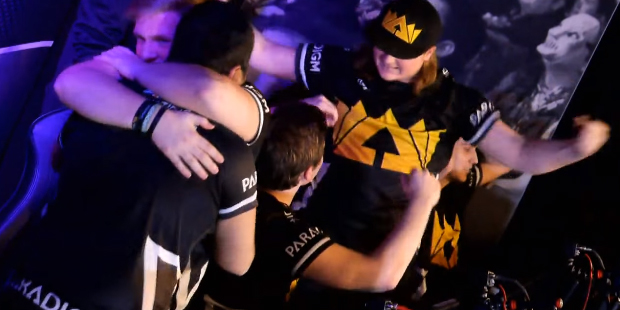 This weekend Hi-Rez Studios held their European and North American LAN event better known as Super Regionals for their hit MOBA game, SMITE. Teams from around the globe battled it out last week to see which teams would be able to hold their spot at the Smite World Championships being held at The Cobbs Energy Performing Arts Center in January. Only five teams will be able to make it through the competition: two from North America, two from Europe and the winner of a match between the NA and EU third placed teams.

If you missed the finals last night – you missed an insane match between Paradigms, who everyone thought wouldn’t make it past Epsilon eSports. Paradigm played aggressively in the first match – taking the win. When the second match came around, Epsilon was better prepared this time banning Hel, Khepri, and Freya, which seemed to work for the team as they took the second match. The third match went to Paradigm – and even though the team was up a point – many felt that the team wouldn’t win the next match, and when Epsilon won the fourth match – the odds where in Epsilon’s favor, as many felt that Paradigm would choke – but that wasn’t the case.

Now that Paradigm and Epsilon each have two wins in the EU final match, it was evident that each team was feeling the pressure, but Paradigm’s team fights were brutal the team knew exactly when to go full force at Epsilon, and when to back off and regroup. This last match literally had everyone on the edge of their seats – especially when Paradigm’s Trixtank did a move we all thought was going to backfire on them.

Trixtank, using Sun Wukong – decided to jump into the enemies’ jungle, without the other team noticing, he used an item called “blink” which allows you to teleport a short distance instantly – this is where he grabbed the red damage buff, and escaped without getting hurt using Sun Wukong’s “3” called Transformations – this allows you to turn into an Eagle, Ox or Tiger – the Eagle is the fast transformation, which was a smart move on Trixtank’s part.

Paradigm was looking for a team fight, you could see them trying to initiate one – Epsilon was spread out under the tower until Adapting from Epsilon, who was using Serqet jumped into a battle with two members of Paradigm – this started the team fight which gave Funball a double kill. This allowed a chase that took Yammyn of Epsilon leaving one member of that team left – as Paradigm took down the Fire Giant.

After taking the Gold Fury, Paradigm then decided to make a push into the enemies’ base which starts another team fight that Epsilon wasn’t able to handle – Paradigm took down the tower, then went for the left phoenix which came down – the team moved to the mid phoenix, and within seconds – the mid phoenix came down. Paradigm started to attack the Titan – and in doing so they started taking members of Epsilon down as well. Paradigm took down the Titan and became the European Regional Champions. The team that struggled throughout the tournament, the team that no one thought would make it – played an unbelievable game, with some of the most insane team fights this season and have sealed their spot to compete in the Smite World Championships.