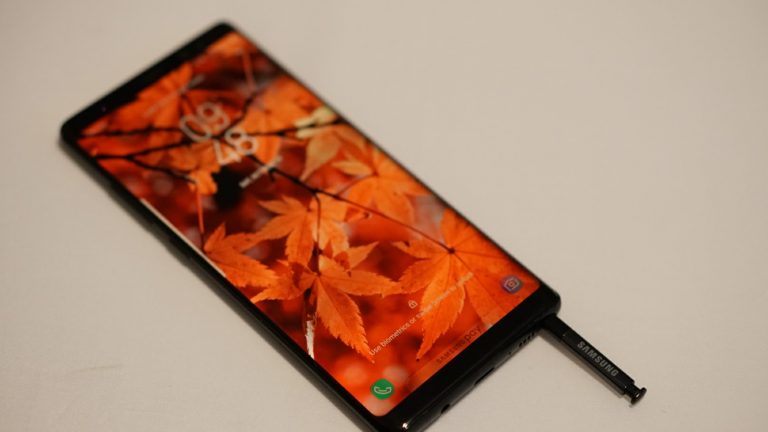 Facebook Twitter Pinterest Email
The Galaxy Note8 boasts beauty and power.Is it worth the near $1000 price tag? Check out the review to learn about the features. #GalaxyNote8

If you have kept up with my reviews throughout the years, you know I am a huge fan of the Samsung Galaxy Note series. I was disappointed last year when the Note 7 was taken off the shelves. Needless to say, I was hype back in August when the Galaxy Note8 announcement came early. After a few weeks of use check out my thoughts on the Note8. As you can see from the specs below, the Note8 checks off all the flagship features on paper. So how does it perform after weeks of everyday use? 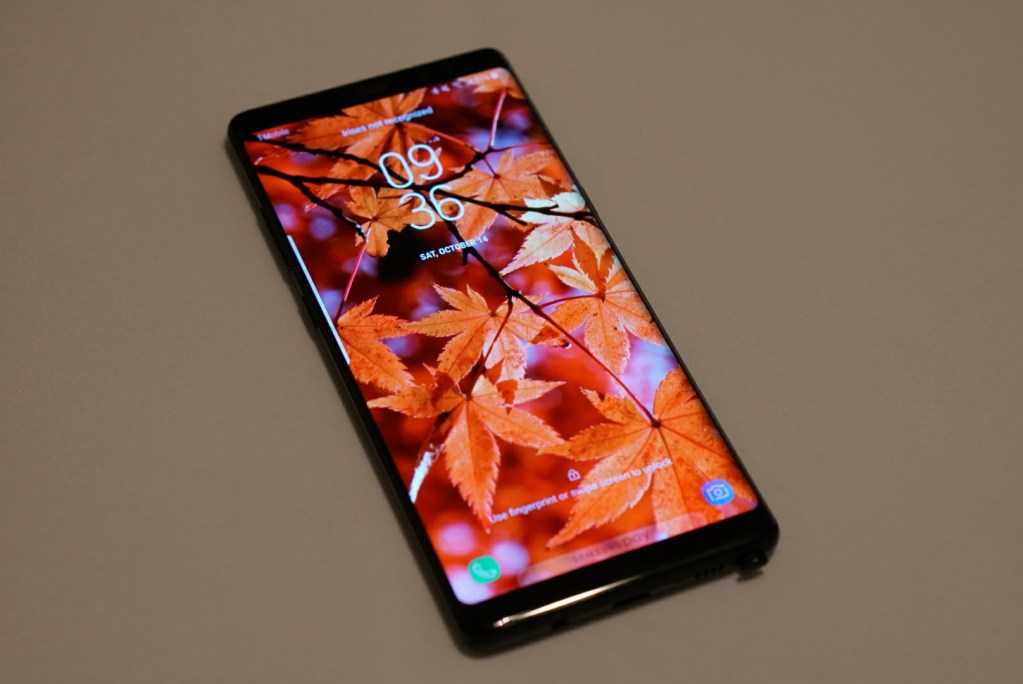 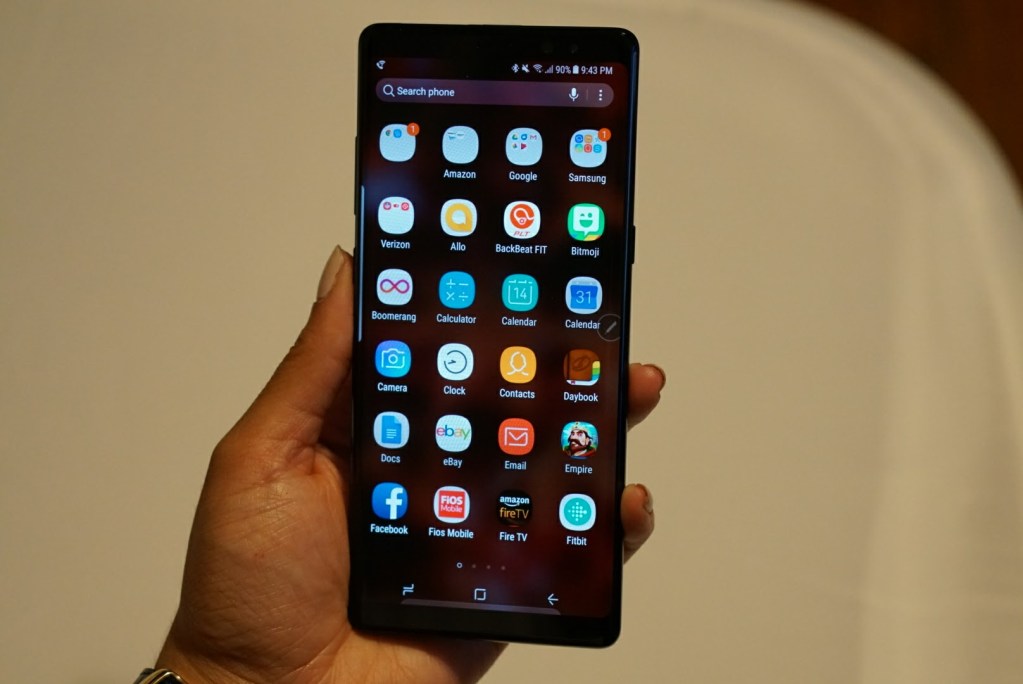 The Galaxy Note8 stays with the premium build quality. You feel it on the phone for sure. While the phone isn’t super wide. It doesn; ‘t follow the slimmer builds that phones like the Galaxy S8 and LG G6 have followed. in 2017. The corners on the Note8 are more squared off. The phone has a bit more grip this way.
On the right side, you have the power/ standby button. On the left, you have the Bixby button with volume rocker above it. About the 6.3 inch display, you have sensors and the 8-megapixel front-facing camera. The back of the phone has two cameras with the fingerprint sensor right next to it. On the bottom from left to right, you have the headphone jack, USB-C charging port, speaker, and S-Pen.

The glass on the front and back beg for a case, not only to keep your phone from cracking but preventing all of those fingerprints. The Infinity Screen that we met on the Galaxy S8 is here, on the Note8 as well. It’s just so pretty! And no, you won’t find a physical home button here.

The hype around the Note8 is real. It’s almost as if the Note 7 debacle never happened. The Note 8 was just so promising at launch that many pre-ordered it (I’m sure the discount offered to previous Note7 owners helped).

Going from the Galaxy S8 to the Note 8 wasn’t a huge jump, but I had gotten used to the S8. I do have more trouble reaching the notification bar and the palm rejection when reaching over across to the other side of the screen. You get all the usual things you get with a Samsung flagship. Beautiful screen, lots of features within, and a dope camera. I highlight some of the main features below and how they worked for me. 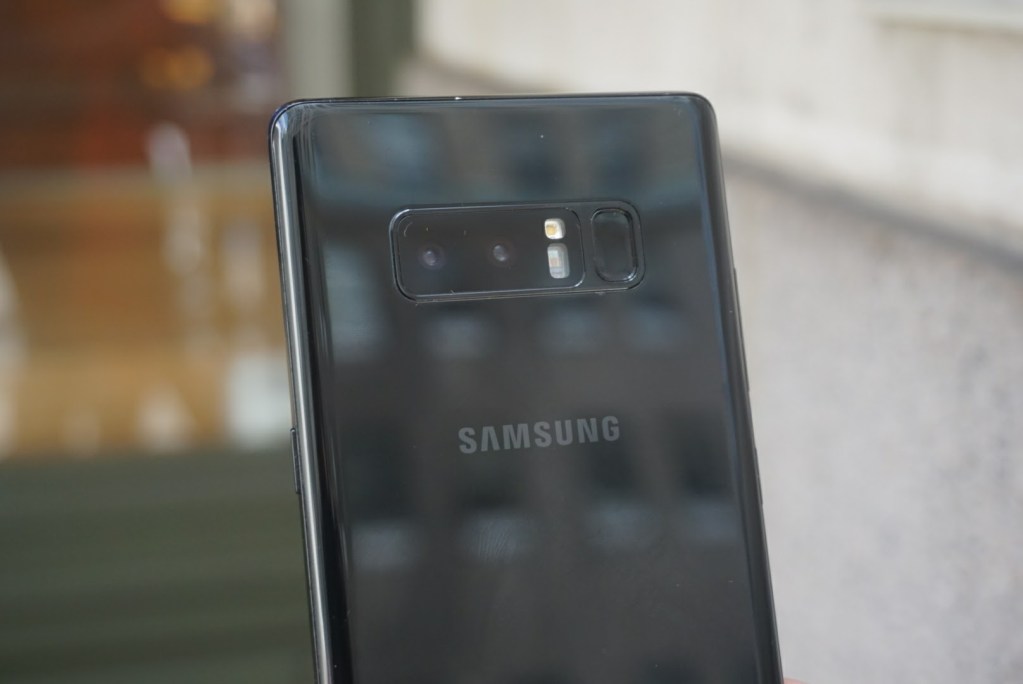 The Galaxy Note8 is the first Samsung phone to have dual cameras. They both have OIS too which is pretty dope. After testing out the Live Focus feature at the launch event, I really wanted to get my hands on it to see how well Live Focus works in regular settings. It replaced the previous “Selective Focus” which i tried to use every now and then. I love that the “Live Focus” option is right there to toggle on and off and you don’t have to go into camera settings mess with it. My fave part is showing what I think are some awesome shots taken with the phone. Have a look at the slideshow, and I upload some photos to my Instagram and Google+ (I know, I know. I will be on Flickr soon). 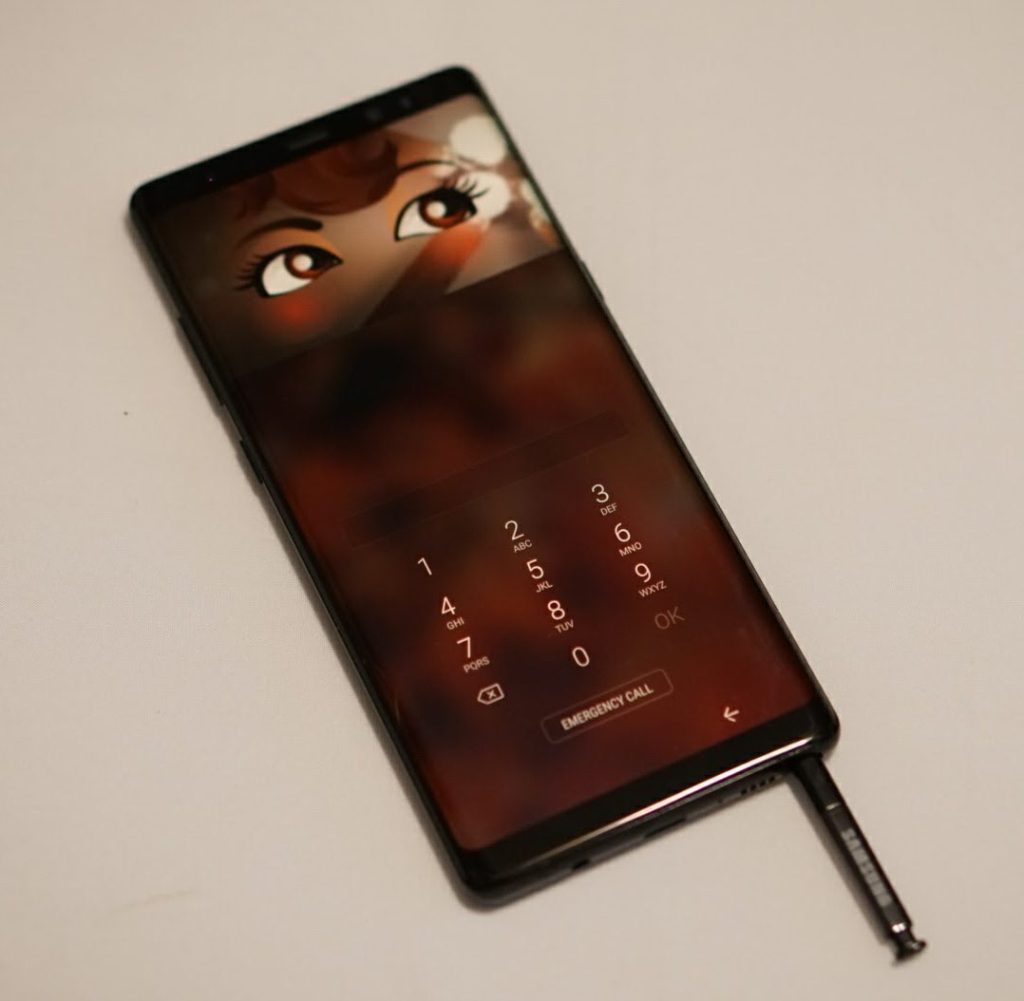 Iris Scanner works pretty well. I have these large cat-eye glasses and the phone will unlock with them on also, but it won’t unlock if someone borrows my glasses and tries the iris scanner. So far so good. You just have to figure out what angle and distance to hold the phone in order to get the scanner to work quickly. If not, you’ll get a prompt that says “hold phone closer/hold phone farther away”

Not my favorite feature on the Note8. Even though the fingerprint scanner is separated from the rear cameras by the flash it is still very difficult to reach if you don’t have large hands. It’s not in a natural “resting” spot for many. I have to adjust my grip to reach. I rely mostly on the Iris Scanner to unlock the Note8.

Oh S-Pen, it has been a while. The precision on the S-Pen gets better and better. From Note 5 to Note8 you won’t see too much of a difference. You can make GIFs and use the pen to send animated texts, also known as “Live Messages” which is pretty sweet. 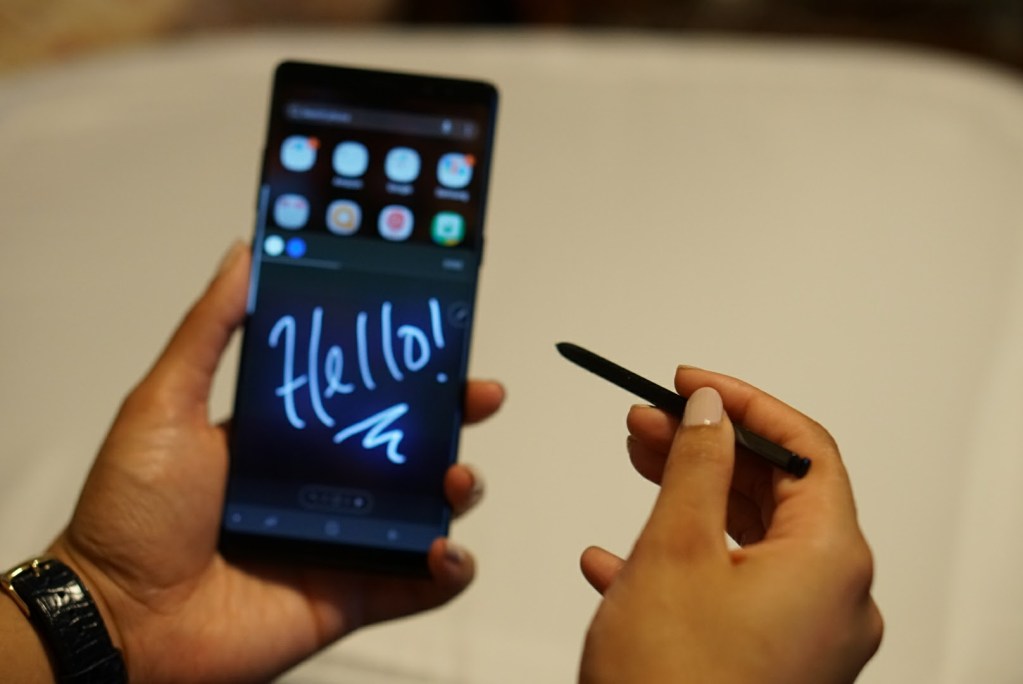 Since the Note8 is a bit more narrow your “Notes” are longer, and if you need to rest your palm, it will get a bit uncomfy after a while. But with the S-Pen you can do more, such as highlighting text to translate, and take notes while the screen is off (screen-off memos). I have been using Screen off memos more and more.

App Pair allows you to pair two apps on the App Edge Menu. Once you click them, those 2 apps open together on the split screen. You will love this feature if you enjoy using the multi-window feature. It’s great due to the 18:9 screen ratio.

Pretty self-explanatory, but I imagine you will be using this phone a lot and you want it to be able to handle a spill or using it in the rain. 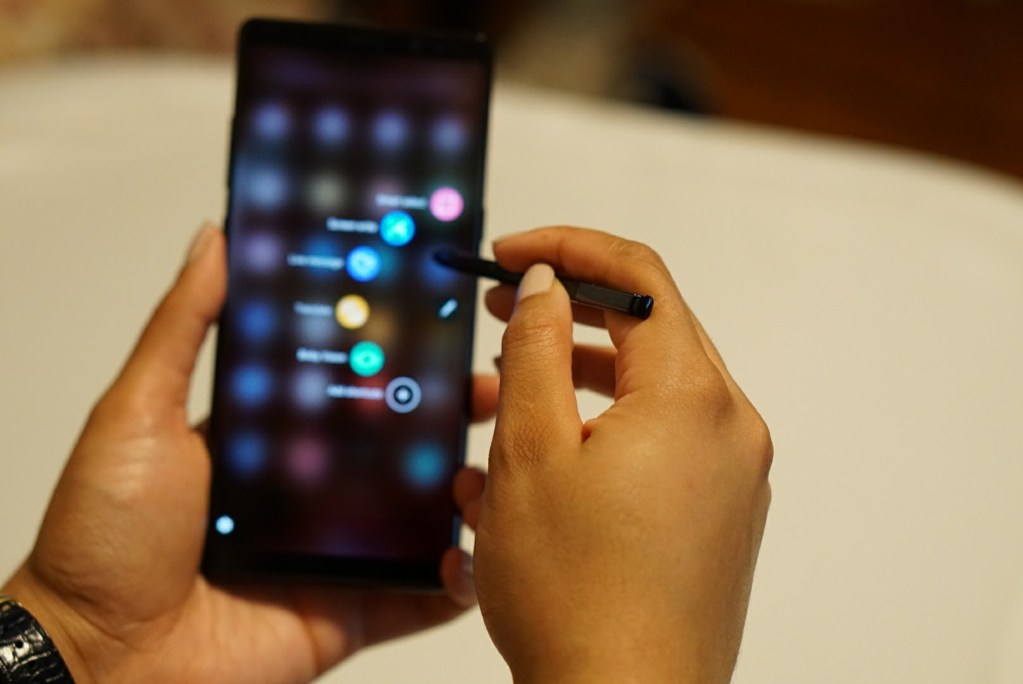 As for endurance, the phone seems pretty durable considering the build. What I mean by that is, the phone has glass front and back. If you drop the Note8 enough times it will crack. I mean, it’s glass. This is the first Note I didn’t put a screen protector on. I do have a case on it since the glass back is so slippery and I am constantly adjusting my grip to reach the notification bar or fingerprint scanner.

Even though the Note8’s battery is smaller than the Note 7’s (safety first, right?) it has done well lasting throughout a busy day. Of course, personal use will vary with everyone but I’m surprised at how late in the day I had to recharge the phone. I still don’t charge the phone for more than a few hours and I definitely don’t charge the phone overnight. Using the phone regularly with medium to high brightness (due to very sunny days in New York) the Note 8 survived well beyond my work day.

If the Note 7 left you doubting Samsung, then the Note8 will definitely restore your faith in the company. The phone is solid but is definitely not for everyone. Many won’t use the Live Focus camera feature or S-Pen features. For the price of nearly $1000 dollars, you want to make sure you will use most of the features. If you weren’t a stylus person, you won’t become one overnight. I even find myself using it less than usual. Relying on voice to text input and smart assistants has helped me get information down. The Note series isn’t that much different than the Galaxy S series anymore. This is where pricing and feel come into play more than usual. But if you’re willing to drop the $900- $1000, you won’t fall short of reasons to enjoy the Note8. You can find it at all major carriers.