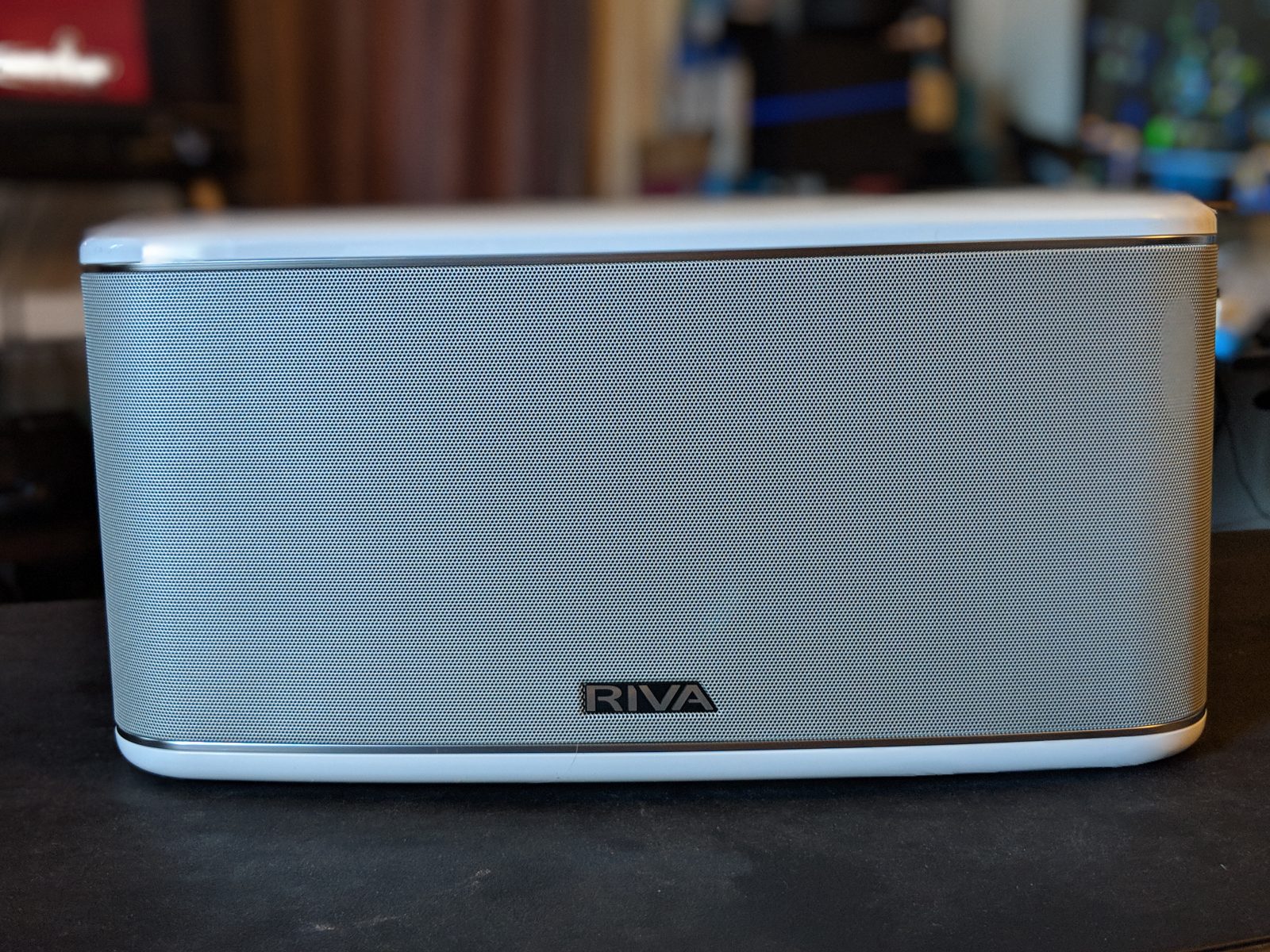 The Arena and Festival speakers are part of Riva Audio’s Wand multi-room speaker system. I actually never heard of these speakers from Riva, but I am a fan of the multi-room speaker setup. The company sent over both the Riva Arena and Festival for me to try out. The Arena is the smaller cubed speaker, the Festival looks like like a large table-top speaker. While these speakers don’t have a smart assistant built-in, you can cast via Google Assistant, 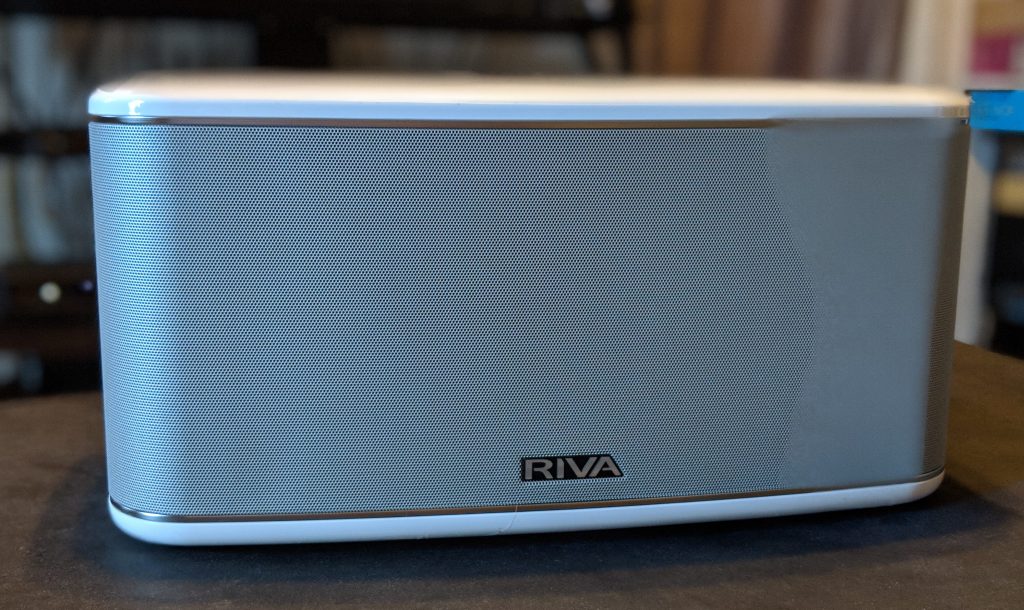 The speakers have weight to them. The top and bottom are both shiny hard plastic, surrounding the metal speaker grille in the middle. The curved edges are a nice touch. The top of the speakers have the controls. Located on the top center the play / pause button are in the middle. A bigger control (square) surrounds that button. The top and bottom are volume controls, while the sides of the button are track controls. The previous track button also doubles as the “pairing mode” button, just hold it down for 3 seconds. The next track button, also doubles as an input source switch button as well. Hold it down to switch between USB, or Aux.
The play/ pause button is also surrounded by an LED indicator light. The light switches colors depending on the status. 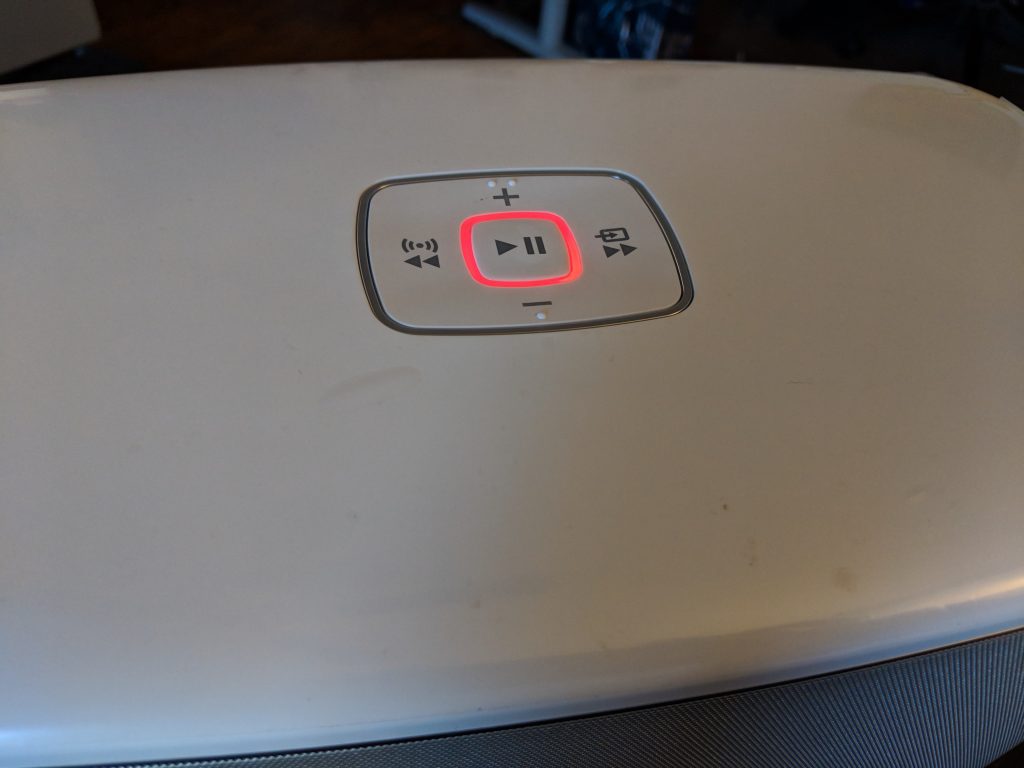 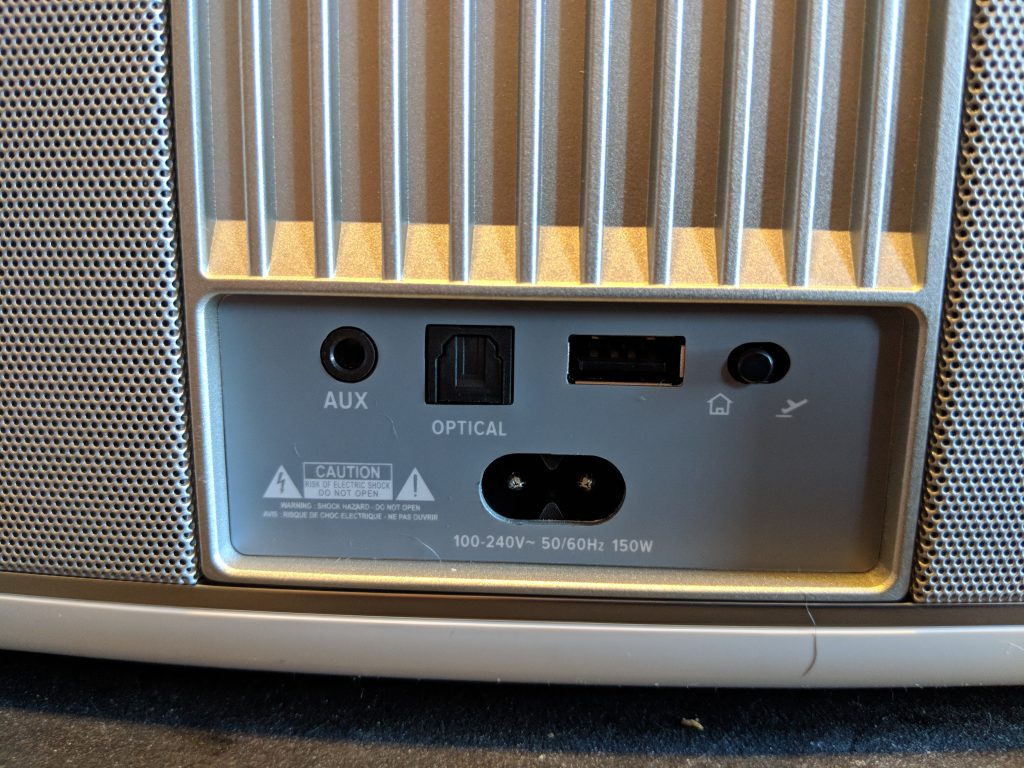 The back of the speakers have the ports. The Arena has a thread for mounting. Below it you have the Aux out, USB port, home or away switch, and power port below it. The Festival doesn’t have a mounting thread since it’s more of a tabletop speakers, but it does have the same ports and an optical out port in case you want to use the Festival as part of a home theater setup.
The Festival is somewhat large at 14″ inch long and weighing a little more than 13 pounds. So you need to find a nice place to put it, as it’s not a device you move around much. 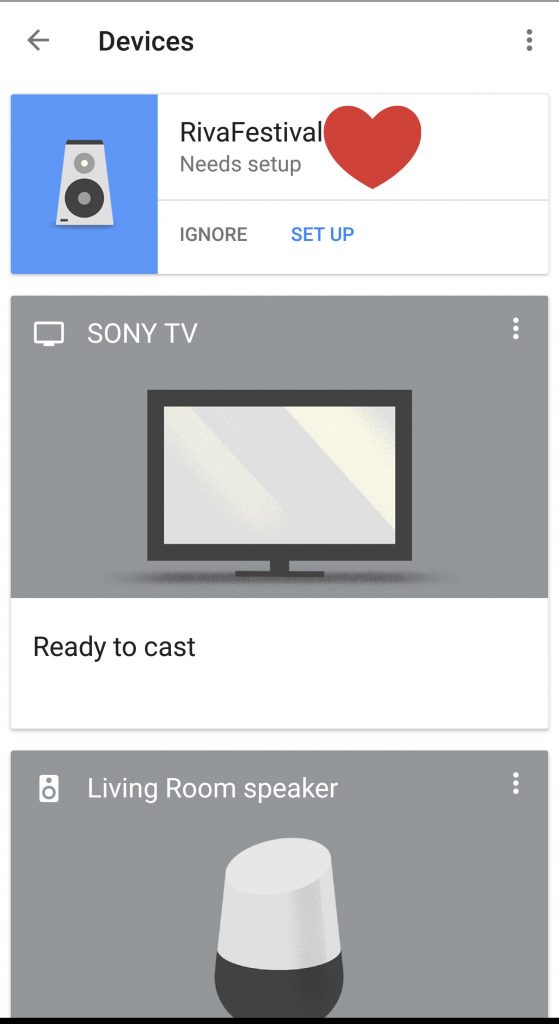 The Riva Arena and Festival have a lot of connectivity. It has Google Chromecast built-in, bluetooth playback, Spotify connect, Airplay, and Aux out. There’s not much to do for a physical setup, just connect to a power source. For casting you need to download the Google Home app, and to control the speaker you need the Riva Wand app. I have and am familiar with the Google Home app, so I just had to add the devices. With the Home app, you connect the speakers the wifi. To create a group, you have to use the Google Home app as well. Just keep in mind, that even though it works with the casting, the Riva speakers don’t have an assistant built in. They don’t have a microphone to activate a smart assistant either.
The setup is the same for both the Riva Arena and Festival speakers. The Wand app allows you change the devices names and mess with the bass and treble levels. I assume that’s where the updates are too, as there is an option for that, but there are currently no updates available. You can also use the app for tutorials The Riva Wand app isn’t the most intuitive, but it works. They can work on making the UI better. The design looks too old-school. 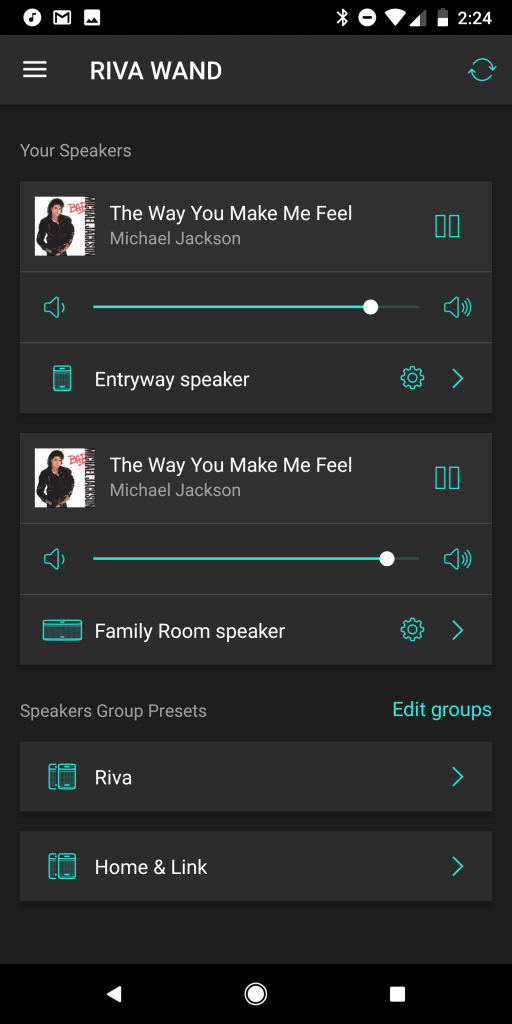 The LED indicator is a nice touch. I do wish the power cord was a bit longer so I could place the speakers in better places long term (without an extension). I have both Spotify and Google Play Premium plans, so excited to have the option to cast quickly from my phone. As always, it’s nice to just be pick a song and jam out in a couple of clicks or ask Google to play it. Google Assistant on a high end speaker is pretty dope. It’s cool to use your voice commands to play tracks as well. It’s nice to have the system synced with wifi
A cool non-audio related feature is that you can charge your device via the USB port. It’s not something I used much, but it doesn’t hurt to have.

I placed the Arena on the corner of my computer table and the Festival on an end table at the other end of my living room to balance out the sound. The sound on both the Riva Festival and Arena is not flat at all. Even at high volumes, the sound has a kick to it. The Arena gets very loud despite its small size. It’s loud enough to be the only speaker in a small office.
The Festival and Arena have ADX Trillium sound. What is that? I am no audiophile, so the explanation about Riva Wand’s sound setup is from their site: Trillium™ is ADX’s proprietary audio technology that delivers a 300 degree sound field without excessive compression to allow a true reproduction of the musical content.
I used the Riva app to make the music have a more natural sound, and for certain pop songs I upped the bass on the track. It’s nice to have somewhat of an EQ option. I think the highs on the Arena are just OK, while the Festival does a better job at covering everything. The bass is definitely not lacking on the Festival.

From Plugged to Portable

One thing about the Arena speaker is that you can buy a battery pack for it and take it with you on the go. It’s nice to not have to decide between multi-room setup and portability. The Riva Arena battery will set you back $100, but it gives your speaker an extra feature. It makes it a wireless and portable speaker. You just place your Arena speaker on top of it and voila. It’s supposed to give you up to 20 hours of music. 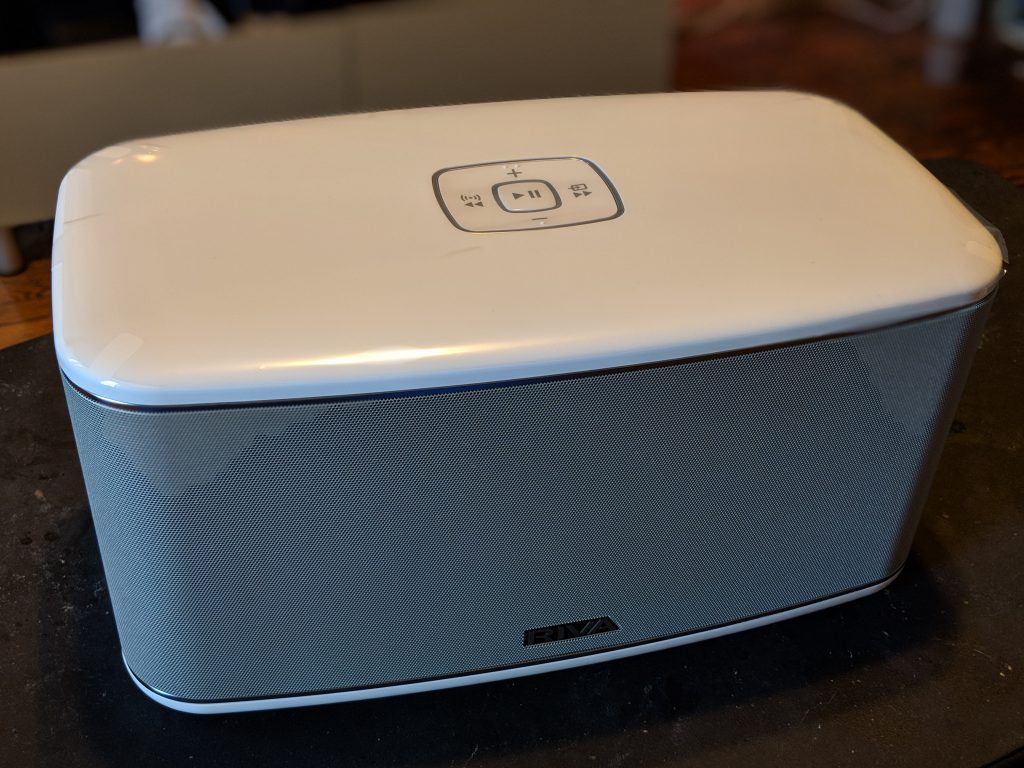 With the Arena and Festival costing $249 and $499 respectively, you have to be sure of you want like the sound and options on the speaker. Since you have a nice amount of connectivity options, sound would be your main deciding factor. Of course, sound is objective to the listener but at least you can somewhat control the bass and treble with the Wand app.

The Riva speakers give you everything you want in a multi-room system. If you’re not a super audiophile, but enjoy great sound and want your connectivity options, you can’t fail with an Arena and Festival speaker system. What’s great about the Riva multi-room system is that it doesn’t lock you into an ecosystem (just wifi, or just one smart assistant). With bluetooth and Aux out port, you can go the old route, connect any device and listen to whatever is playing on your device. That’s a reassuring freedom to have, and it’s somewhat future-proof.