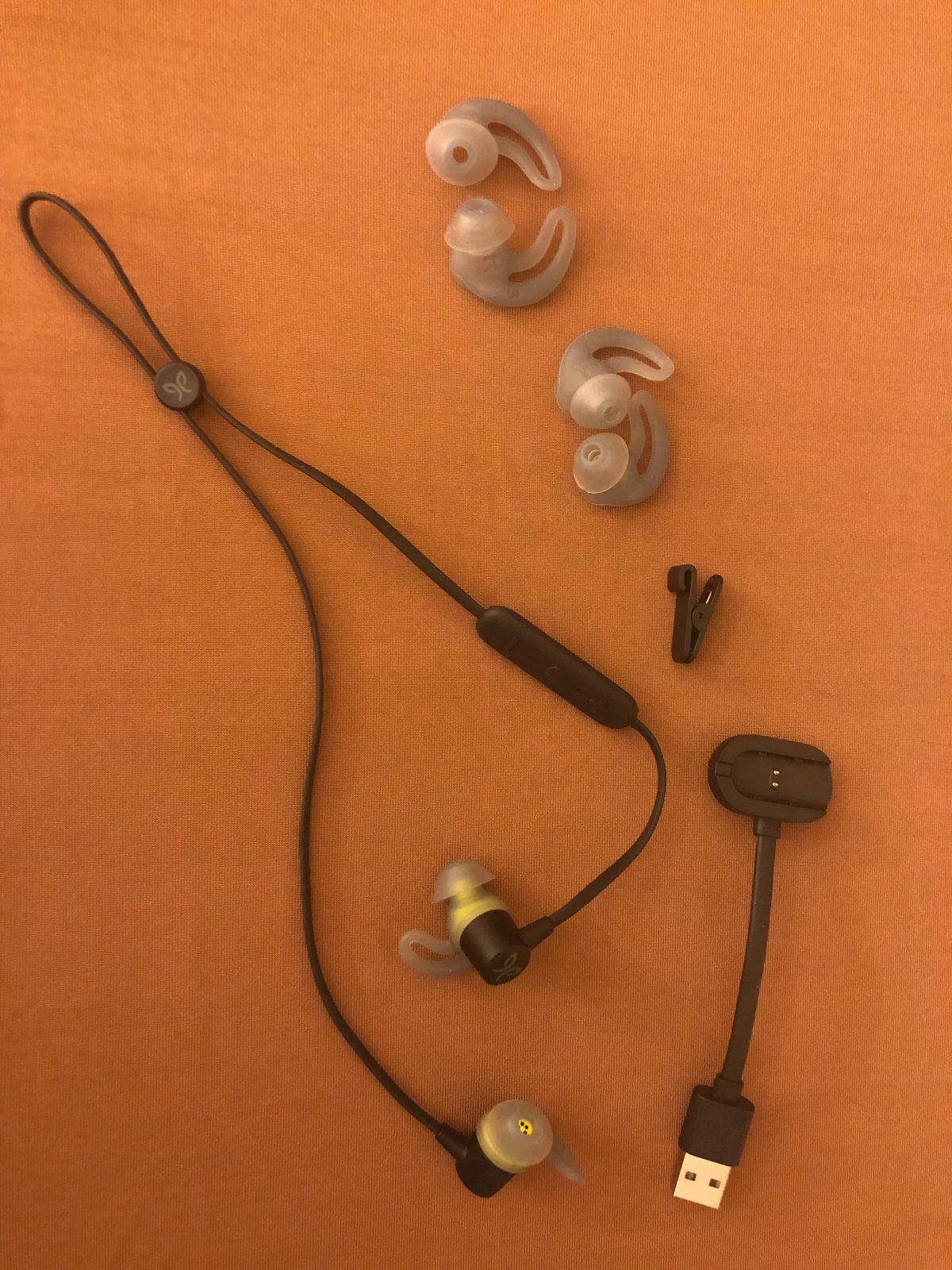 Jaybird’s entry-level earbud model, the Tarah, offers great audio quality, snug fit, and long-enough battery life that will get you through your daily commutes, travel, or workouts. 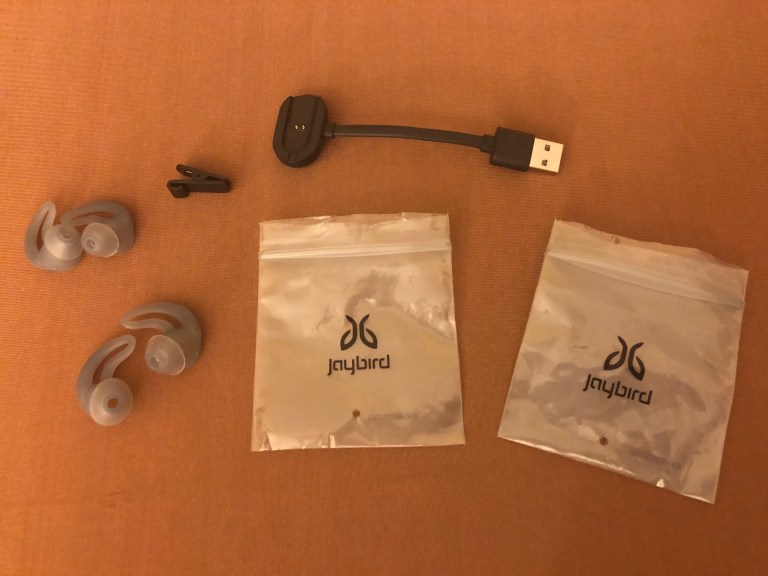 Right out of the box you get the Jaybird Tarah headphones with cord cinch, two additional sets of ear gels (in total you get three size options), the charging cradle with USB cable, and a shirt clip. The headphones come in three different colors: “Black Metallic-Flash”, “Nimbus Gray-Jade”, and “Soltice Blue-Glacier”. Since these are the first-tier models for the Tarah line, the wiring and the headphones are made with a rubberized material, whereas with the Tarah Pro the wiring is made of a more premium braided materials. Despite this, the overall build quality of the Tarah is solid, but I don’t think it’s one that warrants the $99 price tag. I’ve paid less for far more in build for over the ear headphones, so the MSRP made me squint a bit in confusion.

The headphone wiring was a good length that ensured they didn’t snag on anything or anyone. Although the Tarah is not completely wireless like Airpods, the wire that attaches the left and right earbuds gave me a sense of security that I’d have something to grab on to if I needed to pull them out my ears quickly and not lose it. Alternatively if somehow an earbud popped out, that string of “connective tissue” could be the difference between catching your headphones at the last second or losing them forever to a trash bin. A few inches below the right earbud are the controls. The connected controller is a blessing considering I was able to clearly distinguish, through touch alone, the increase and decrease volume buttons (they are raised plus and minus signs), as well as the Power button which sits between them. There were no incidents of accidental button triggering and it was nice to have a control that was simple and just worked without hassle. As great as all this is, it made me wonder why Jaybird would provide an audio accessory with smaller pieces but not include any sort of carrying case or pouch; which would make great sense for the target audience of people on the go. I guess you could just stick them in your ears at all times, or toss them in a bag. But again, at the price point I would expect just a little something extra.

Though I appreciated the slick clip-in lock design of the charger, I was a little annoyed by the 3-inch USB cable connected to it. I don’t need a cord the length of a football field, but short cords tend to position the cradle and/or the device in peculiar ways so that it won’t lay flat on a surface. Another potential irritant is the fact that the charger is proprietary. If you somehow lose it or it becomes inoperable, the only way to replace it is to hit up Jaybird’s website. Though the cradle charger is priced at a negligible $5.99, once you add in standard shipping (4-7 biz days) it goes up to $12; if you want express shipping (2-3 biz days) you’re now paying close to $20 for a relatively tiny piece of plastic. 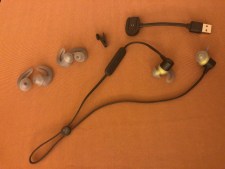 I’m usually not a fan of in-ear headphones due to lack of comfort (I have small, gnome-like ears), but my fears about fit were dashed after noticing the extra ear gels. The first thing I did was switch out the size “2” ear gels that were already attached to the headphones with the smaller size “1”—and surprisingly they fit snugly and securely. This probably the single most important first step for users of in-ear headphones; unless you have a secure fit, you’re gonna to have a bad time. Once I got myself in order, the headphones felt lightweight and more tailored to sit comfortably in the ear.  Though the headphones are not noise cancelling, they do block out a decent amount of ambient clamor to prevent audio leak and elevate the listening experience.

Sometimes wireless accessories have some charge in them as soon as you free them from their plastic housing, but the Tarah’s didn’t. Upon connecting the headphones to its charging cradle there is a satisfying ‘snap’, so there’s never a question of it its correctly mounted. While according to Jaybird, you only need 10 minutes to get over an hour of play time, I ended up charging the Tarahs overnight because I forgot about them after getting in an intense game of Smash Bros.  Needless to say I started the first test day at a blazing 100%, ready to run these babies into the ground.  The headphones had zero complication with connecting to and between multiple devices. Switching between two different iPhones (8 Plus and a 6s) was a breeze as the Bluetooth 5.0 picked up the connection quickly. The audio cue that plays on the earbuds once it connected, which is a tone and a human-voiced announcement that mentions the device charge status, is a convenient touch. The product description notes that after 2 hours of charging you should get up to 6 hours of play time.  I would say I was able to get about 5 hours on the first charge after aggressive usage of watching a few long Netflix titles, running around the city throughout the day with the volume levels on high (though not deafening), using it for phone calls and constantly tweaking the settings. On the next day of testing, I allowed the headphone’s charge to dwindle down to around 12%, then snapped them on to the cradle for about 20 minutes. In that short time frame I yielded about 45% of charge; which is pretty good if you have limited time. The sound can get very loud (on par with most headphones that come with a mobile device purchase), so you won’t have any issues in that arena. In my tests, I walked around NYC on busy streets, in and out of the subway, on crowded buses and everywhere in between; and I still was able to feel relatively enveloped by the audio when playing music. Although the music listening experience was good, the call quality varied as some people complained to me that I sounded like I was “under water”.

One piece of advice I would suggest to take heed to–the Jaybird companion app is an absolute necessity. Depending on which batch your headphones are from, the sound quality may be unimpressive upon first listen. As someone who edits podcasts and music, I can quickly ascertain whether or not the hardware running the audio is going to be a wash, so I knew it had to be something in the settings that needed tweaking.  I  checked the App Store for something that would offer some solace and came across the Jaybird app. After downloading and launching the app, I was quickly able to discern that 1.) the earbuds needed a firmware update and 2.) I needed to turn on a more suitable preset to get the sound I was looking for.

I enjoy generally all genres of music (country notwithstanding) so whether I’m playing Tame Impala, Justice, Dreezy or Lizzo; my bass and treble needs fluctuate wildly. After checking out the default presets, I spotted the “Discover More Presets” button which took me to an endless treasure trove (or dark, bottomless pit depending on your views around too much choice) of both Jaybird and community (i.e. actual users) sourced presets. Much of what I found had too-much-of-something which provided a few minutes of frustration, until I stumbled upon the literal “Excellent Sound with Bass” preset. That is “The One Preset to Rule Them All” in my opinion. If you somehow hate all the options presented or want a more hands-on approach to your EQ settings, you can also customize and save your own presets using a dead-simple drag and drop system that lets you choose the Low, Mid, and High ranges. You can set the ranges as you’re listening to music to test things on the fly. There’s even a History bar which can serve as an undo button in case you happened to have the right setting one moment, but ruined things in your quest to be perfect in the next. The app offers music playlists from staff to help you on your mountain climbs, bike rides, and other activities. There’re also playlists in multiple genres ranging from Latin, to Indie, to Classical to K-Pop, which came as a delightful surprise. However, in order to listen to them, you must sign up using email, Facebook, Google or Spotify as an account is required. 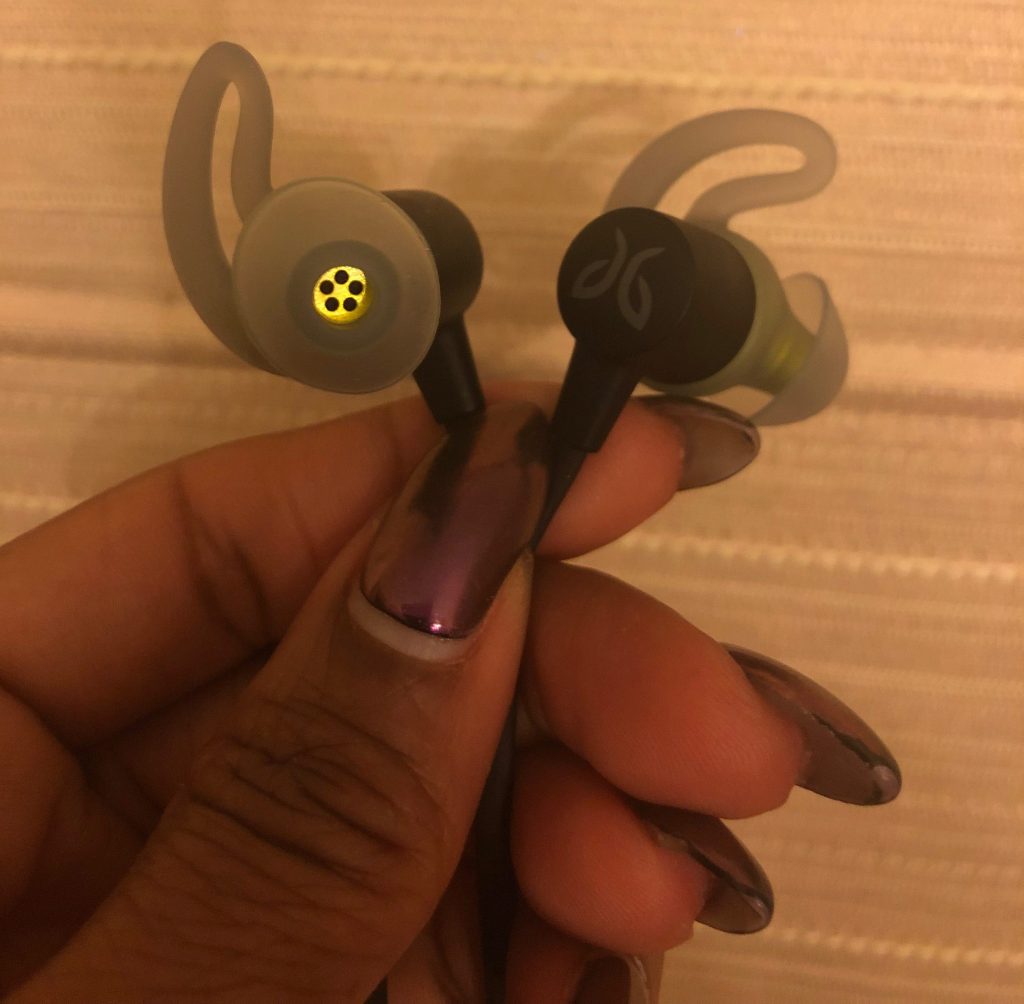 Rounding out the app features, you can edit your profile in order to be a proper Jaybird community member and connect to a streaming service (only Spotify), and deal with any headphone support issues right in the app. I found that to be convenient, along with the fact that any pertinent device information is displayed prominently in this tab, so you won’t have to guess or go hunting for the box for the details (assuming you didn’t throw it out). Overall, I encountered no issues with the headphones in the 2 weeks I tested them. I was able to enjoy crisp sounding music in a package that was comfortable in my ears.

However, I did randomly discover a bug related to playback in the Apple Music app. If I played a song in the iOS Music app then manually slid the volume bar to low and high in one motion (and vice versa, whether in quick or slow succession), the Bluetooth connection would terminate, and the headphones would seemingly restart. Even though the issue rights itself as the headphones reconnect after about 10 seconds, it’s a strange and annoying bug that doesn’t seem to replicate anywhere else.

All that said, if you’re looking for headphones that are durable, sweat-proof (also IPX7 water-resistant; up to 1 meter), offer good sound quality with high customizability, fast charging though average battery life, and don’t mind the $99 price tag ($80 on Best Buy as of this writing); then the Jaybird Tarah is for you. 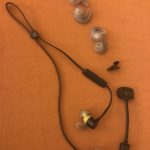