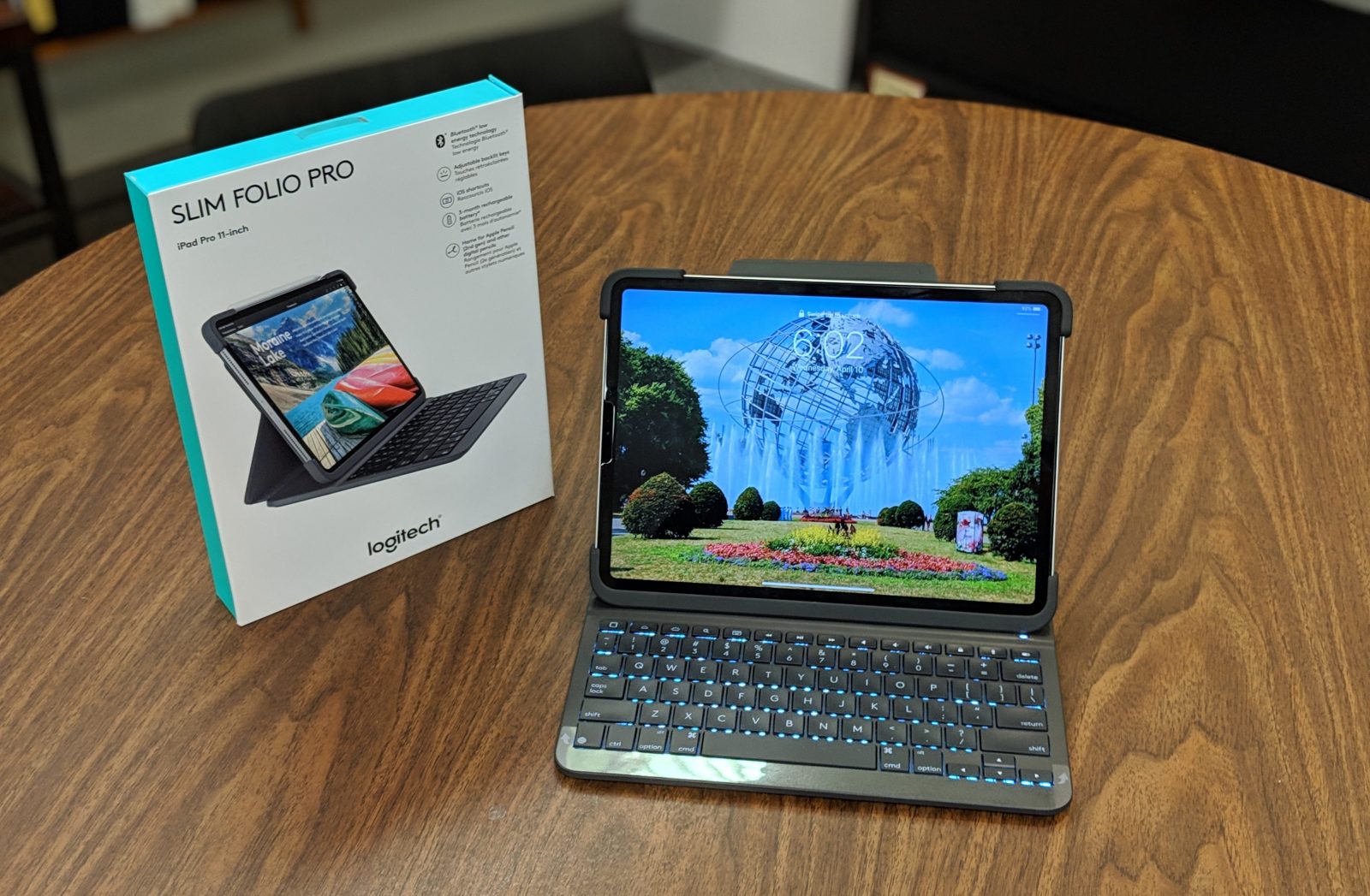 I got my first iPad Pro this year, and while super excited to play with it, I knew I needed to protect it. I got the 2017 11-inch iPad Pro, and while it’s sturdy, I knew that it could easily get dinged and scratched. I used Apple’s keyboard cover for a bit but noticed that the edges of the iPad weren’t covered and protected. I feel the need to have edges covered since I think that they suffer the most. Logitech sent over their Slim Folio Pro keyboard, and I started using it right away!

One thing about the Slim Folio Pro is that it’s not slim at all. I didn’t expect it to be thin because it has a full keyboard on it, but it’s bulky. The Slim Folio Pro covers the corners of the iPad, which is something that automatically makes me feel better. That includes the power and volume buttons. The keyboard has six rows of keys (Apple’s keyboard has five rows). The extra set of keys on Logitech’s keyboard are shortcuts for brightness, and media playback controls. The Slim Folio Pro has a flap with a slot to keep the Apple Pencil in place both when you’re charging and when you’re on the go. On the right border of the keyboard, you have a USB-C charging port.

Setting up the keyboard is pretty easy. It’s a bluetooth accessory so you would have to go through the motions of pairing the keyboard to the iPad via the bluetooth settings. The keys on the keyboard are pretty good. They have enough travel to feel like a real keyboard. They have a more clicky sound and they’re backlit. They aren’t the largest keys, but they have a little space between them to feel comfortable in traditional typing position.

The backlight was a big deal to me since I like working in dim rooms due to my sensitive eyes. With the keyboard it gets easier to use the iPad more often than a laptop, that is of course if there’s an app available for what you need to accomplish. It’s great to get some work done. It’s not ideal for holding in hand while trying to watch videos. It also feels weird having the keyboard exposed like that. Holding it in hand gets tiring, as expected.

My biggest fear is when the keyboard is closed and the keys get to the screen. Due to the bulky corners of the keyboard case, the keys aren’t directly on the screen of the iPad. But just in case, I got a screen protector (yes, it works with Apple Pencil) to protect it from any scratches the keyboard can give it. I do wish there was a way to separate the keyboard from the rest of the case to make it easier for media viewing

The Logitech Slim Folio Pro keyboard goes for $120 for the 11-inch model and $130 for the 12.9-inch model. It’s only available in charcoal grey. It’s $60 less than the Apple Smart Keyboard Folio and offers a lot more protection for the iPad. That’s if you’re okay with the extra thickness of the Slim Folio Pro keyboard. You can get it at Logitech.com

It’s only been a few weeks, but I feel the keyboard will be able to handle extensive usage in the long run. The Slim Folio Pro is definitely a go! The well-designed case, along with the backlit keyboard allows for maximum productivity. It charges via USB-C meaning you can use your iPad Pro’s charger when needed.