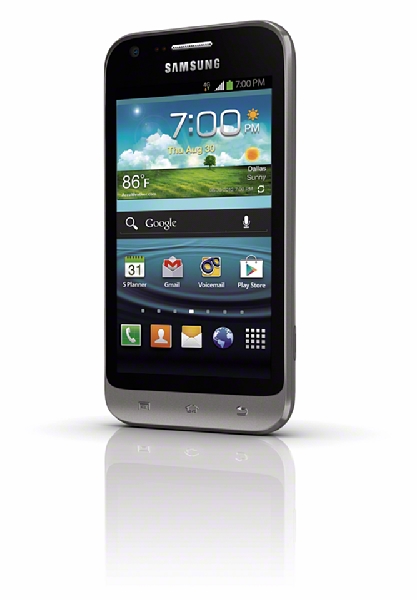 Add one more to the Galaxy family. Samsung announces their latest affordable smartphone the Victory 4G LTE on sprint. You can purchase the phone beginning Sunday September 16th for $99 (after a mail in rebate).

Read the press release below for more details:

OVERLAND PARK, Kan. – Sept. 13, 2012 – Sprint (NYSE:S), the only national carrier with Truly Unlimited℠ 4G LTE data, text and calling to any mobile, will offer the feature-packed Samsung Galaxy Victory™ 4G LTE at a price that makes it an easy choice for customers who are ready to step up to their first Android™-powered smartphone. At less than $100, Galaxy Victory gives Sprint customers the benefit of Sprint 4G LTE at a very accessible price.

Galaxy Victory will be available beginning on Sunday, Sept. 16, for just $99.99 with a new line or eligible upgrade and two-year service agreement, after a $50 mail-in rebate via reward card1 (excludes taxes and surcharges), at Sprint Stores, Sprint Business Sales, Telesales ( 1-800-SPRINT1) and Web Sales (www.sprint.com).

Manufactured by Samsung Telecommunications America (Samsung Mobile), the No. 1 mobile phone provider in the U.S. and the No. 1 smartphone provider worldwide2, Galaxy Victory is powered by Android 4.0, Ice Cream Sandwich, a 1.2GHz dual-core processor, 4-inch touchscreen display and access to the Sprint 4G LTE network. This allows the smartphone to effortlessly switch between applications and enables a rich web browsing experience with true multitasking.

“Price is often a barrier for customers who are ready to transition from a feature phone to a smartphone; Samsung Galaxy Victory brings Sprint 4G LTE to the mass market with the high-end features and capabilities of a premium Android smartphone,” said David Owens, vice president – Product Development, Sprint. “Priced under $100 and paired with Truly Unlimited data from Sprint, our customers will appreciate the functionality of this device without worrying about costly monthly rate plans or surprises on their wireless bill.”

Galaxy Victory customers enjoy a Truly Unlimited experience with Sprint Everything Data plans. Sprint’s Everything Data plan with Any Mobile, AnytimeSM includes unlimited web, texting and calling to and from any mobile in America while on the Sprint Network, starting at just $79.99 per month for smartphones – a savings of $20 per month versus Verizon’s comparable plan with unlimited talk, text and 2GB web (excludes taxes and surcharges). Customers value Truly Unlimited data, because it’s simple and straightforward – no metering, no throttling and no overages, all while on the Sprint network.

Fully Loaded with Features
As a Sprint ID smartphone, Galaxy Victory provides the ability to cut through the clutter of the more than 600,000 additional apps in Google Play™. Sprint ID offers an innovative way to personalize Android smartphones with apps, widgets, wallpapers, ringtones and more and ID packs deliver a complete mobile experience – based on consumers’, students’ or businesses’ interests or favorite brands. Customers can download and switch among five self-selected ID packs tailored to an individual’s lifestyle and interests with a few simple clicks.

Additional features on Galaxy Victory include:
5-megapixel rear-facing camera with LED flash and video capture, ideal for documenting important moments as they happen
1.3-megapixel front-facing camera that can be used for video chat
Google Wallet™, turning the smartphone into a wallet using Near Field Communication (NFC) to make safe purchases at more than 100,000 participating retailers

The search function on Galaxy Victory is fast and simple with S Voice™, an advanced natural language user interface that enables search and basic device-user communication. It can be used to turn the volume up or down on the music player, answer or reject incoming calls, shut off or choose to snooze the alarm clock or take a picture by saying “smile” or “cheese.”

Galaxy Victory also makes it fast and easy to share pictures, videos and presentations between devices or with friends and groups of people:
S Beam expands on Android Beam™ to enhance device-to-device sharing through NFC technology by adding the ability to share photos, videos, documents and other DRM-free content to Android Beam. This allows a 1GB file to be shared within minutes and a 10MB file within seconds by simply touching another S Beam enabled phone.
AllShare® Play allows users to wirelessly connect Galaxy Victory to their PC, tablet or television to immediately share files, stream music, user-generated videos, photos and other DRM-free content to AllShare-enabled devices using Wi-Fi®. It also allows the user to remotely access files on up to six Samsung devices.
AllShare Group Cast lets the user share a presentation or photo album in real time with multiple friends on the same Wi-Fi network.

During the pre-launch phase, customers with 4G LTE devices may begin to see 4G LTE coverage in these areas and are welcome to use the network even before it officially launches. Sprint plans to announce commercial availability of 4G LTE in these cities in the coming months, at which point we expect coverage, performance and reliability to get even better. The markets will fill in until coverage largely matches the existing nationwide 3G footprint.