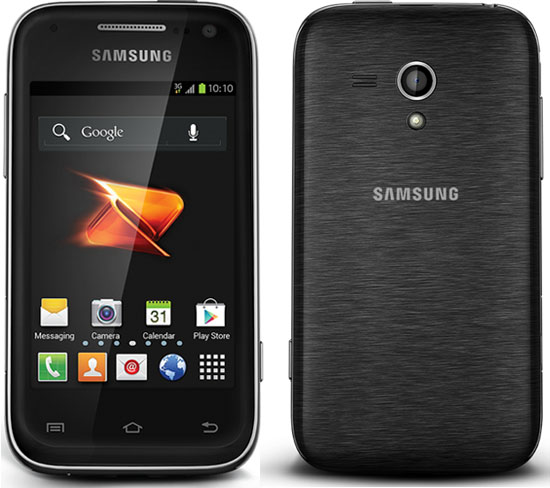 It seems that smartphones are getting bigger with larger than life options. As our smartphones grew in size and capability so did the price or our plans. Prepaid and no contract phones were not an option as the phones weren’t up to par with current technology. Luckily, phone manufacturers and prepaid/no contract companies are releasing great phones that don’t limit options. I will be reviewing the Samsung Galaxy Rush for Boost Mobile.

Samsung seems to have something for everyone. This phone seems to be for those who enjoy features in a small package. So what do you get when purchasing the phone?
This phone is definitely small compared to the Samsung Galaxy S II and the Samsung Galaxy S III. It’s very smooth and light, coming in at 3.84 ounces. Should be easy to maneuver due to its small size and rounded corners measuring 4.84 inches long, 2.36 inches wide and 0.47 thick. The display is 3.5 inches with a 480 x 320 resolution. Under the display are three capacitive touch buttons: the menu button, the home button, and the back button. It ships with Android Ice Cream Sandwich 4.0. It has a 3.5 megapixel rear-facing camera (with flash) and a 1.3 front-facing camera.

The phone has the standard specs of Android Ice Cream Sandwich. It has WiFi, Bluetooth, GPS. It has the Samsung TouchWiz skin. I was surprised to see that it had GPS and turn-by turn navigation. Since the phone is from Boost Mobile; you can download Boost ID packs that individualize your phone as a whole. These themed ID packs have everything from wallpapers, apps, ringtones, and widgets. These themes are customizable to your taste. I’ll be the first to admit that I am somewhat of a tech snob. I like, wait let me correct that, love all the bells and whistles of a phone. For some reason before using the phone, I associated prepaid/ no contract phones with lagging, lack of features and no innovation. The Boost Mobile ready Samsung Galaxy Rush comes in a bright orange box. Yes, packaging does excite me. I was very curious to see how much I’d have to sacrifice going prepaid/ no contract route.

The phone is comfortable in your hand. You can carry it anywhere; clutch, pockets. The phone is extremely portable. When it came to texting I had a bit of trouble; since I’m used to larger phones. It didn’t take long before I was used to it. The phone isn’t the most ideal for video watching as the resolution isn’t up to par with other smartphones out there. Surprisingly it was smooth when streaming. I didn’t expect that.

So what was my favorite thing about this phone? I love that it had a physical camera button. Most (or maybe all Samsung phones) dont’ have a camera button. It is just so difficult to take pictures when using the touch screen shutter button. More on that: Camera
The pictures are a bit less than decent. If you’re like me; and rely on your smartphone camera a lot; you might be a bit disappointed. The images aren’t clear. Viewing the pictures that you take on a Galaxy Rush on a computer; you will notice the lackluster color and slight blurr. The camera offers some features such as panorama mode and smile shot modes. You can also adjust settings on the camera; such as white balance and exposure. My biggest concern with the camera was the shutter speed. It lagged a couple of seconds to take the picture.

Talk Time
When talking on the phone; I didn’t have any problems. It was a bit muffled, but I could still hear the other party clearly. I don’t use speakerphone often, but when tested it sufficed. You can’t stray too far from the phone, or the other party won’t hear you at all.

Rush to This Galaxy Smartphone?

One thing about this phone is that you get what you pay for. You won’t break your pocket when purchasing this phone. You will also save with the affordable plans from Boost. It seems that Boost is catching up in the game. This phone delivers on everything it promises on the package. For the price you pay you’re getting a lot of features. It’s a good beginners phone. For those transitioning into smartphone use; it’s great. It’s simple in a good way. You learn to appreciate the simplicity. I actually know someone with it; and they say that it may not be as speedy as other phones (1 Ghz processor), they aren’t missing much from the mainstream phones with the mainstream carriers.

Who should get this phone? Those who need the smartphone features without extra add-ons, and don’t mind not having a keyboard. The phone will set you back $120 – $140. It’s affordable and a great gift for the holidays. The Samsung Galaxy Rush can be purchased at the Boost Mobile website.