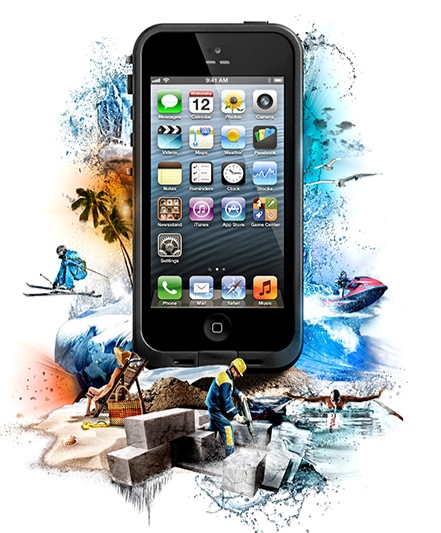 Here in midwest we’ve had basically a snow storm every week. I’m such a “klutz” aka always dropping my phone…I had gotten to the place where I did not even feel comfortable taking it out when the weather sucks for fear I might ruin one of them. LifeProof just saved my life with the Fre iPhone5 case.

LifeProof is considered to be the “go-to” when on the hunt waterproof cases to protect your iPhone in unfortunate extreme weather situations. The LifeProof iPhone 4S case was a favorite to many geeks! The $80 Fre case for iPhone 5 is largely based with the same aspects of the iPhone 4S case with a few notable differences. LifeProof Fre case is probably the thinnest properly-tailored waterproof case Jesus has  ever given us for an iPhone. I’m not a huge fan of tons of plastic, but LifeProof somehow makes this feel “strong” and it does not have a cheap feel. LifeProof has included all the buttons including volume and power, along with a screw for the headphone pug to make it truly waterproof.

LifeProof boosts an impressive 30 minutes of under water submissive without damage. Like I previously stated, I’m a klutz so I am completely ecstatic about the Fre case meeting military standards in surviving impacts, shock and even your real-life scenario, accidental drops of as high as 6.6ft (2 meters). Jesus wanted me to have this! lol Another notable redesign feature of the LifeProof Fre case is that is also provides a new “windows” for Apple brand to stand out, so you “cult of apple” folks do not have to worry about having your phone confused for an Android.

The Lifeproof Fre case also is overall a comfortable case to hold despite its robust and overly protective design. This aspect is especially important for me…a girl with small hands and tons of gadgets! The shock absorbing rubber provides a great grip when holding the iPhone in the hand, doubling as a rubber bumper that protects both outside and inside. I expected the buttons to be hard to press, but case integrated buttons are all quite easy to press. Even the flip to silent switch works great.

Overall I definitely think this is something that should be a every klutz phone line up. I’ve had in one my phone since the storms being in Chicago and have not once tired of it. It is solid for the $80 price.