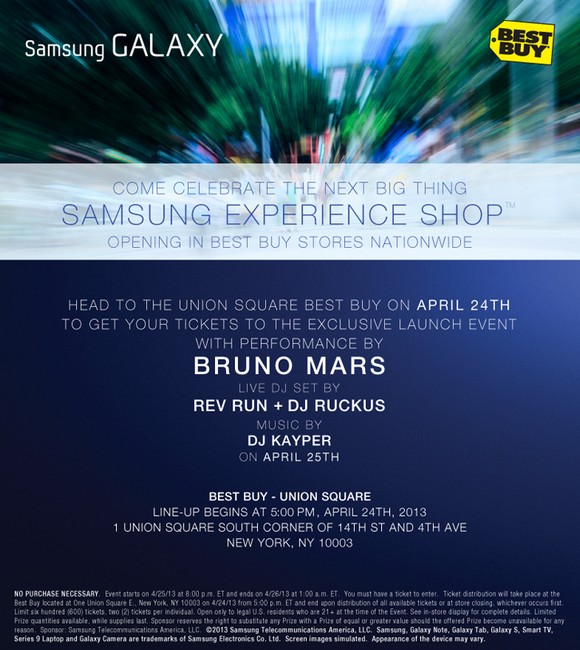 Facebook Twitter Pinterest Email
With mixing from DJ Rev Run and a spectacular performance by Bruno Mars, Samsung Experience Shops at Best Buy and the Galaxy S 4 were launched in all-star fashion. The only way Samsung knows how to do it!

As you may have heard already, the Samsung Galaxy S 4 officially comes out this weekend. There are different pre-order dates and availability at the store statuses depending on the carrier. Along with the recent announcement of the Galaxy S4, Samsung also announced that they were rolling out Samsung Experience Shops at over 1400 Best Buys across the United States. They officially began rolling out a couple of days ago. To celebrate the official release of the Galaxy S4, and the Samsung Experience Shops, Samsung had a BIG official launch event. Samsung even gave away tickets to the first 300 hundred Samsung fans that went to the Samsung Experience Shop in Union Square New York City. The main attraction of the event was a promised performance by award-winning artist Bruno Mars. But before all of that, Samsung wanted you to get to know their devices just a little bit better. The event was last night at Cunard Hall by Battery Park in New York City. The setup was like a huge Samsung Experience Shop. You sort of get an idea of what you can expect at the Experience Shops in Best Buy. This is not a little kiosk or booth that Samsung has set up. It’s a spacious area with all of Samsung’s devices on display. Everything from the Galaxy Tab 2, the Galaxy S 4 tablet, Series 9 Ultrabook, to the NX Series professional cameras. There will also be Samsung employees at the the Experience Shops who can help you activate service on a phone, or troubleshoot a malfunctioning device. The event was more interactive of course. With the Samsung and Best Buy employees at different stations guests were given demos of highlighted Galaxy features. I received a few demos. I learned how to setup and use quick command on the Galaxy Note 8.0. I went through a gallery of drinks using air gestures. I also used S Translator to order “polligianoo parm” or chicken parmesan in English. Being in the tech world, I am more familiar with some of the features. But it was great for those guests who won tickets to attend. Samsung also made the demos fun by providing an incentive to learn. When visiting a station and going through a demo, you would get a token (similar to prize tickets at an arcade). You could get prizes with these tokens. They ranged from little speakers, bluetooth headsets, tablets and even a big screen TV. During the entire interactive demo period, guests were treated to great music mixed by famous DJ Rev Run. To top of the evening, Bruno Mars performed a moving set! He played some of his most popular hits during his 45 minute set. He even did some old songs. It’s safe to say that everyone was jammin out with him. I felt the floor shake. Bruno Mars delivered a great performance! As always, Samsung knows how to throw a memorable event!
How many people are getting the Galaxy S4 this weekend? What features stick out to you the most?