HTC One vs Samsung Galaxy S 4 Comparison: 3 Reasons Why HTC One Wins! 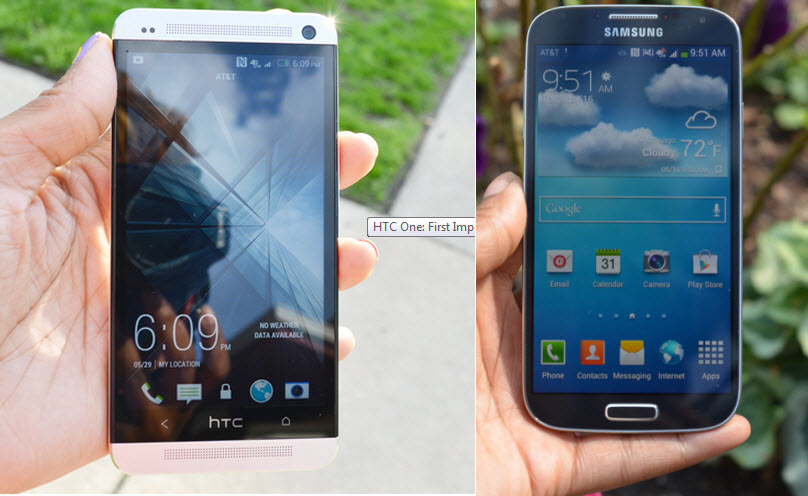 I’m not even going to lie, I’ve had a strong disdain for HTC since I had the Evo a few years back on the Sprint network. HTC has consistently been an underdog in the smartphone world and I was not looking forward to the HTC One because I thought it was going to be like the other phones they have released. I was VERY enthusiastic about the release of the Samsung Galaxy S4. I’ve used Samsung phones for the past 2 years and have only had good experiences. You can tell by the title who won! Here are the top 3 reason why HTC One outperforms Samsung Galaxy S4. The builds on both phone are absolutely stunning, however the HTC One takes the lead here. If you held both of the phones, one in each hand, the Samsung Galaxy S4 feels cheap even though you know it’s a quality phone. The HTC One is created out of a single piece of aluminum, utilizing a unibody technique that results in one of the most solid feeling, rigid, beautiful and substantial designs I’ve ever had the opportunity to get my manicured hands on LOL! Samsung’s using what feels like the same plastic (polycarbonate, you’ll hear them say) as in previous devices and although it makes the S4 lightweight and thin…I just prefer the futuristic feel of the HTC One.

As a side note, the lock button on the HTC is extremely annoying with how hard it has to be pressed and the position, but otherwise it’s fine.

Software – No Lag with HTC One

The real story here isn’t necessarily what differentiates the HTC One, software-wise, from the other top tier new gadgets/smartphones. It’s what’s not here – Lag. While the One is technically clocked at a lower speed than the S4 with an otherwise comparable spec sheet, this phone does not lag. It’s buttery smooth the entirety of the time you’re using it.

The OS utilized on the S4 is Android v4.2 Jelly Bean. But that’s a half lie. Despite the underlying OS, this phone is absolutely buried under bloatware, not the least of which is Touch Wiz, itself. The Samsung Galaxy S4 screen is one “sexy” screen. I’m allowed to say that! When I first saw it, before seeing the One, I was gawking over it. Then I saw the HTC One screen and I was like JESUS you have blessed me! Most non-tech people won’t care about the software or the hardware. So just go ahead and move forward with this solely based off of the screen! Yes I said it! Even thought the S4’s Super AMOLED screen has more vibrant colors than the One, the One gives you more realistic colors with crisp graphics!

So if you’re in the market for a good Android phone, do yourself an favor and get the HTC One. You will not be disappointed! Especially if you are using the phone with AT&T (who provided both phones) with their freakly fast LTE service. Both phones were able to handle my data usages just fine, which says ALOT. Remember, don’t text and while! It can wait!