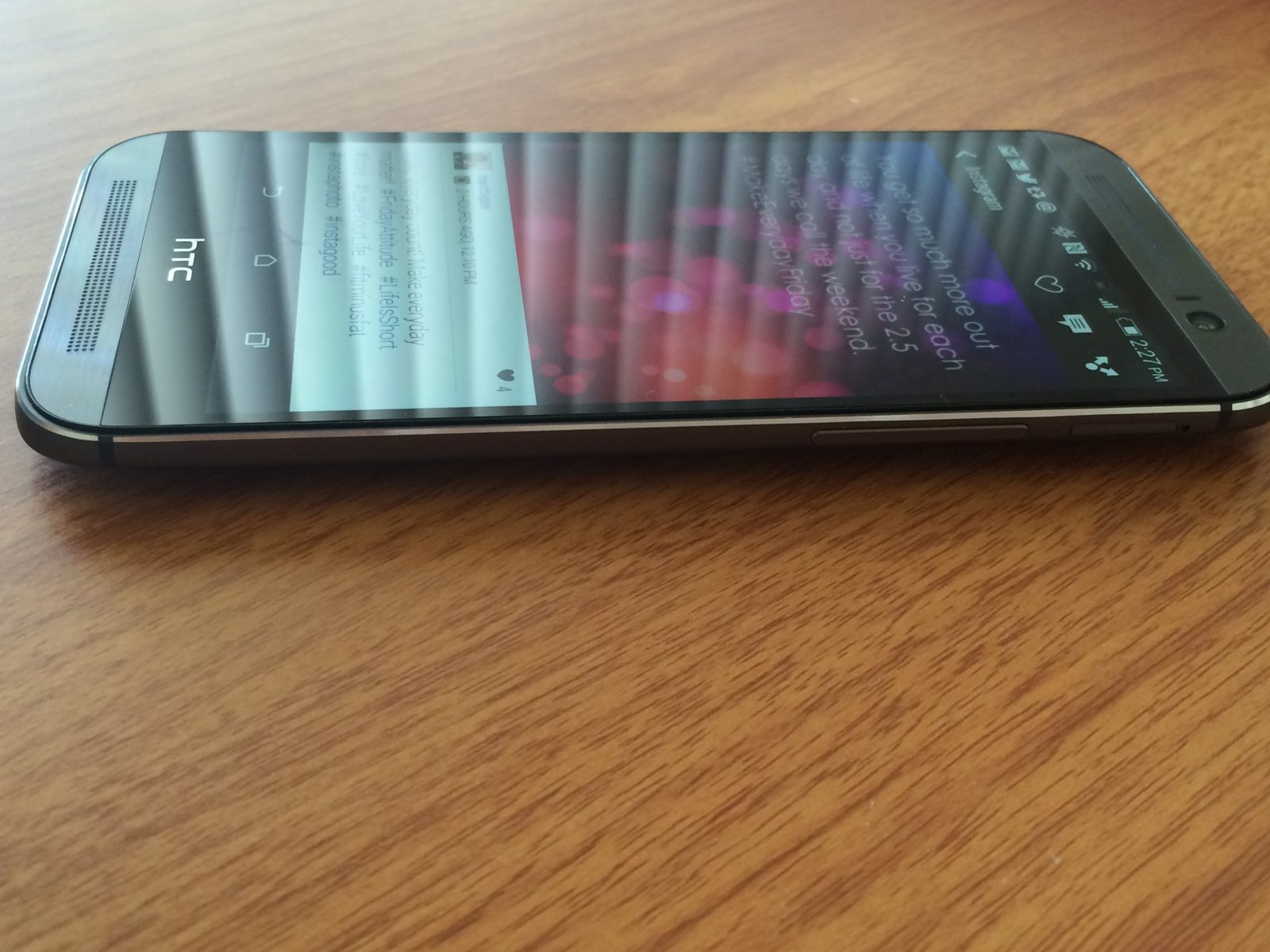 In 2013 HTC released one of the most beautiful smartphones I’ve ever seen and easily THE best so much so that I purchased one as my personal android device. So now a year later with the HTC One 2.0 or officially called the HTC One M8, does it still live up to the hype? The HTC One M8 has an all-metal unibody that hugs the screen making it seamless, unlike the HTC One (M7) that had plastic along the sides. The M8 is also a darker more gun metal color but like the original HTC One it has a curved back, which makes it feel more comfortable in the palm of your hands. The larger size makes it a smidge less comfortable than the original. Also, round one of the HTC One had more of a matte finish to it’s aluminum body where the HTC One M8’s all metal body is smoother making it slippery and I’m not as confident to go sans some kind of body armor (case).

The new HTC One has a 5” display making it slightly larger than the 4.7” screen of it’s predecessor. I will say with all the navigational icons being “on screen” it feels like you get the same screen real estate as the original. However, you do benefit from the larger screen when playing videos and games (like Candy Crush). This go round there’s an expansion card slot for a microSD memory card for up to 128 GB– you still can’t change your battery but hey we take our victories where we can.

Now packing Qualcomm Snapdragon 801, quad-core CPU’s it’s much zippier and packs a little extra kick. My review unit is on the Sprint Network, which now has LTE in my area so I got no outages and zero lag unlike my personal HTC One handset even when using it in 3G areas. BOOMSOUND is back with it’s two stereo speakers placed in the front of the phone. This time you won’t find the Beats Audio boost but you won’t miss it. The speakers actually sound louder and more crisp.

HTC Sense got an upgrade to HTC Sense 6. With this upgrade you get a cleaner less cluttered feel and Motion Launch gestures. Motion Launch allows you to answer the phone by simply putting it to your ear, double tap the screen to wake up your phone and launch the camera app from landscape mode by pressing the volume button. You can also swipe the screen in different directions for different results.

With the screen off you swipe right to launch BlinkFeed, swipe right again to get to the BlinkFeed menu giving you options to customize your experience, swipe left to launch the widget panel, swipe up to unlock screen and swipe down to make a voice call. Speaking of BlinkFeed one of the differences I noticed is that it now takes up the entire screen whereas on my original HTC One I could add a time and weather widget making BlinkFeed only take up about ¾ of the screen. Another change is that you can now add customized topics. From the BlinkFeed menu simply input a topic in the “Search for content” section press enter, select from the “bundles” that show up and click on the “+” symbol in the upper right corner to subscribe and voila you will now see various sources on this topic in your feed.

As I’ve stated many times before I’m not huge on selfies or taking pics in general so where some may still have issue with UltraPixels it doesn’t bother me. The HTC One M8 has the HTC Duo Camera with the front facing camera touting 5MP. 5MP is great for a front facing camera even in comparison with other smartphones on the market with much higher rear facing camera megapixels.

I think it’s cool that there is a Selfie option when taking pictures and there is also a dual camera option so you can actually take a selfie and use the rear facing camera simultaneously to make one picture. The selfie comes rectangular with a white border but hey I’m sure some people will enjoy using it.

Even though a lot of people are bummed about the return of Ultrapixels it has improved since the original HTC One. Even in low light the way the M8 picks up colors is impressive. I took a picture using the HTC One M8, HTC One and iPhone 5S respectively:

There are also come cooler features that we didn’t have before like uFocus where you can choose what you want to have in focus and what you want to be blurred. The Zoe feature is back still letting you create mini-movies using pics and videos. If your looking for a phone to replace you having to carry and additional camera – this is not that.

Overall the HTC One M8 is a great phone. Will it compete with the Samsung Galaxy S5? It depends on what you’re personally looking for in terms of smartphone experience and I haven’t reviewed the latter to really give an educated response. I have no complaints about the HTC One M8 the girth and location of the power button took some getting used to. I’m used to the power button on the top right it’s not located on the top left.

With all the automatic refreshes on all my social media accounts and BlinkFeed the battery still lasted me about 14 hours before I had to recharge it. As far as a flagship phone HTC really outdid themselves but is it enough to outdo the competition – that still remains to be seen but it is an improvement over the first go round.

Check out our HTC One (M7) review here.

Check out our HTC One mini review here.