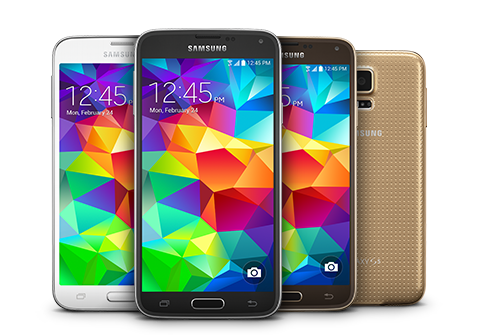 Facebook Twitter Pinterest Email
The Samsung Galaxy S5 has everyone talking with great features listed. But how does it fair in day to day use? Does it perform as expected? Check out our review where we go through the important features of the smartphone.

By now we expect a flagship phone from manufacturers on on an annual basis of not sooner. One of the companies we anticipate highly from is Samsung. With their rise in popularity with consumers and the tech world, we’re always waiting to see what Samsung will come up with next. A couple of years ago I wasn’t too heavy into the spec game, but with the similarities in flagship phones we must differentiate the specs that make each phone different even if ever so slightly. Check out the specs of the Galaxy S5:

When looking at the Galaxy S5 you wouldn’t be able to see much of a difference in build from the Galaxy S4. However the S5 is thinner and lighter than the S4. The display is just gorgeous. One of the best I’ve seen in a while. The colors are a bit over saturated but I’m okay with that when they look this good. (This is all the first glance).

Button placement on the S5 is the same as previous Galaxy models. Power / standby button on the right side and volume rocker on the left. The front of the Galaxy S5 is a bit different however. The soft touch button on the left is not a back button, it’s a recent apps key. The home button is a bit longer, looking more like a pill.  It’s supposed to cater to the fingerprint scanner / sensor. The top border has the headphone jack (no cover) on the right side. The left side has the IR blaster and a microphone. The bottom border has the USB 3.0 port and the seal (remember the Galaxy S5 is rated IP67 waterproof and dust-proof).
On the backside you have the 16 megapixel camera and under it you have the flash. Next to the flash though, you have the heart rate monitor. On the bottom you have the speaker grille. But for the most part, it’s the “seen one, seen them all” case for the Galaxy S5.

There’s nothing new or shocking about the design. The design has worked for Samsung despite the complaints of many who don’t like the plastic look and feel. If you know me, you know that it doesn’t really matter much, because I’m going to slap a case on it anyway. It has a quality feel to it, but not a premium feel. I hope that makes a bit of sense.

The phone feels great in hand. I’m used to handling large phones by now. The Galaxy S5 is a bit wider feeling (it is wider) than the S4, but still manageable for the most part. The perforated back cover does help a bit with grip and handling. I won’t say it makes a huge difference. Its great in the sense that you don’t see many fingerprints. Props to Samsung for making such a thin phone waterproof and dustproof.

The 5.1 Full HD Super AMOLED display is hands down one of the greatest displays out there. It’s just so vibrant and clear. The color saturation is full-on. That’s something that I’ve come to expect from Samsung. Overall it has great viewing angles and levels of brightness. It’s visible on most days outside with little to no problem. It also has low brightness for nighttime reading. That’s great for me since I’m extremely photophobic at times and it’s hard to deal with, when you have a gadget addiction.

The Galaxy S5 comes with Android KitKat 4.4,. Androids latest OS has been all the rage. So I was curious to see if Samsung’s skin TouchWiz would hurt or enhance it. TouchWiz looks a lot cleaner and less cartoony. The colors of the OS are still bright and colorful. It comes with a few of Samsung’s “S” apps. Some of the things you will notice are the the changes in app icons. The quick settings menu has apps instead of a list. The app drawer menu is different as well. There are subtle changes that you will notice if you upgrade from an Galaxy S4 to a S5.

You still have a lot of the Galaxy features like Air View, and Air Swipe.

One of the most important things on the phone (to me). Samsung did a good job with the Galaxy S4’s camera, so I was anxious to text out the Galaxy S5’s 16 megapixel camera. The camera is one of the main selling points of a smartphone, and the competition is so fierce.

Gone is the wheel of “modes” by the shutter key. The camera comes with 6 modes and you can download the others from the Samsung App Store. And no more multiple menus!! That should help everyone.I think that’s a great idea since, not everyone wants all the options of 16 modes. And finally the HDR option.

Another feature the S5 camera has is “Selective Focus”. It allows you to blur out the background or the subject for a more professional looking picture. I like quick editing features like this. They make simple pics fun.

Day-to-day performance is really the most important part of the phone. So when trying to analyze performance, I try to note things that surprised me in both good and bad ways. The Galaxy S5 is running on a Qualcomm Snapdragon 801 quad-core processor. It also has 2 GB of RAM. The processor is an upgrade from the S4. TouchWiz still runs the same as before as well. By that I mean, it has ton of animation and just a little slower than expected. Sometimes you can see the animation too well because of how slow it is. I don’t always enjoy that. It’s a “pretty feature” that will wow newcomers. I know that it can perform just a bit smoother and just a bit faster. I can’t pin point what it is that slows it down.

When it came to the water resistant feature, make sure the charging port is covered and the back cover is on tightly to prevent any liquid from getting through.  I did little things like rinse it under the faucet. I don’t have fun doing these test as I am always afraid of failure or something like that. But the S5 is still alive and kicking. PHEW! Great for those clumisies AKA me who might let their phone slip in a pool or in the sink. One of the most talked about features, the Fingerprint Scanner located on the home button is another new feature / addition. The Galaxy S 5 allows you to register up to 3 fingerprints. You can use your fingerprint to unlock your phone, pay with Paypal and verify Samsung account purchases.

I don’t like the way you have to swipe. It’s very vertical. In theory when using the phone, my finger would be sideways when swiping. Having to readjust my hand sort of negates the point of the quick swipe with the scanner. You get to answer a password after a few wrong attempts (full password, not a 4 digit pin).

I was a fan of S Health when it came out on the Galaxy S4. Samsung saw the power of activity trackers and made it easy to access. This is also because they want you to buy the Gear 2 and Gear Fit activity trackers. S Health gets a bit more in depth this time around. With the addition of the heart rate monitor, stress detector, coach, and overall more data stored; Samsung wants your S5 to be your main portal for health stats. S Health also gives you the option to share your stats via social media networks.

The S5 battery is 2,800 mAh. That’s 200 mAh more than the S4. As always I get decent battery life because I’ll do my best to conserve. But with regular use, which includes checking 3 email addresses, 2 twitter accounts, Facebook, Instagram, and listening to Google Play Music to and from work I got a full 7 hours. Sometimes a little more. I just hate seeing the battery percentage get so low. The low battery warning devastates me. If you’re a power user, you will definitely need your wall charger and or battery pack.

As usual, the call quality is great on the Galaxy series, no different with the S5. I can hear my other party clearly. They can hear me as well. As usual AT&T has great call quality in most of New York City. The Samsung Galaxy S5 does have one major improvement that I’d like to see on all phones from now on which is water-resistance. If Samsung can do it and put it in such a thin build along with so many other features, I don’t see why it shouldn’t become the norm. I hope it sets the standard for future releases. The S5 is definitely a powerhouse. Unless you really enjoy/ need the water-resistant feature and the heart rate monitor, there is no need to upgrade from the Galaxy S4. It’s more than a reasonable upgrade from the S4 if you’re into the bells and whistles. Now from the S3, it’s a major difference both inside and out. When it comes to other manufacturers flagship phones the S5 does hold its weight. It’s jam packed with features and novelties that are tying in both activity and functionality.

Based on what you’ve read and what you need, will you be upgrading to the Samsung Galaxy S5? Any hit or misses? Let me know!!