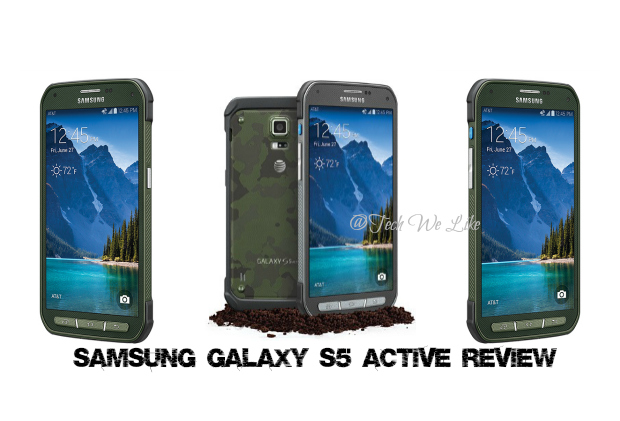 Facebook Twitter Pinterest Email
The Samsung Galaxy S5 Active is meant those who need a little more protection on their smartphone. After reviewing the original S5 I was curious to see the differences and which one I'd like more. Check out our review of the original Samsung Galaxy S5 HERE

The display is nice. I love the display of the original S5, The display here is just as good. At 432 PPI it’s super crisp and just nice to look at. The build and body of the Galaxy S5 Active are probably the most noticeable of the differences between the 2 phones. Taller and wider than the original S5, the design of the S5 Active is a bit sturdier. It has things you expect to find in sturdier phones such as reinforced corners and lining. Oddly enough, the back cover is slippery. I’d expect it to be easier to grip. The physical 3-button layout on the S5 Active has recent apps, home, and (from left to right). The home button doesn’t have the fingerprint scanner like on the original Galaxy S5 (no quick unlocking).

The S5 Active is available in 3 colors, Camo, Ruby Red, and Titanium Gray. I actually liked the camo print on the Active I reviewed. I admit that I wouldn’t go for it personally, but it wasn’t so bad to look at. It gave the phone the rugged look. Everything else is pretty similar, volume rocker on the left, power button on the right side, IR blaster and 3.5mm jack on top, and the bottom has a micro USB port with a seal. It has a 16 megapixel rear-facing camera and a 2 megapixel front-facing camera. There is an “active” key right above the volume rocker. The overall feel is nice. It’s heavier than the S5 but you feel the sturdiness of the build.

Inside the S5 Active

The S5 Active is similar on the inside as well. It runs Android Jelly Bean 4.4 with Samsung’s TouchWiz skin running over it. It has the Qualcomm Snapdragon 801 chip and 2 GBs of RAM. Since the phone is an AT&T exclusive it does have AT&T apps. Glad to see the phone is still powerful inside.

The Active key originally opens up a screen from the Activity Zone app that shows you a compass, barometer, shortcut to flashlight and a shortcut to a stopwatch. Some other apps can be added as shortcuts. Luckily you can go into settings and set the Active key to pretty much any application you want. The only thing is that the Active key doesn’t work when the phone is locked.

I actually enjoy using the physical keys on the S5 Active. Sometimes that TouchWiz lag alongside touch keys are so difficult to deal with and it’s not fun. I found the phone to be a bit more slippery to handle. I don’t like the idea of putting cases on rugged phones. I guess I should just stop being clumsy. The whole point is to be able to get a little wet and dirty and be ok. It’s great that it has nearly all of the features of the original S5.

As usual, I have great service from AT&T in New York City. Their plans are always changing and with the battle of offering more data for a lower price you should check out their latest plans.

You can check out AT&T’s coverage map HERE

You can check out AT&T’s plans HERE Overall the experience was very similar to that of the S5. It’s actually a little better than the S5 (for me) because it helps with my clumsiness. I still suggest a screen protector in case the phone falls directly on the screen. If you already have AT&T service, I’d pick the S5 Active over the original Galaxy S5. I can live without the fingerprint scanner since I feel that Samsung hasn’t perfected it yet.

Learn more about the Galaxy S5 Active HERE on AT&T or from Samsung’s site. Technology is in everything we use. It’s more of an everyday type of lifestyle now. It’s been engraved into the home decor category as well. With the Meural...

Nextbase came out with their 622GW 4k dash cam earlier this year. I’ve had the chance to check out their 422GW dash cam and became a fan. Design and Build The...

It’s always exciting checking out the newest Pixel phone. I recently checked out the Pixel 4a and I loved the camera and size for the price. A little late to the...

It’s been a while since I’ve checked out a WearOS watch. Oppo came out with one this year that looked promising but looks arent enough. What did I think...

I recently had the opportunity to test out Acer’s Nitro XZ2 Curved Gaming Monitor, and I have to say I was pleasantly surprised. When I first saw the curved monitor I...