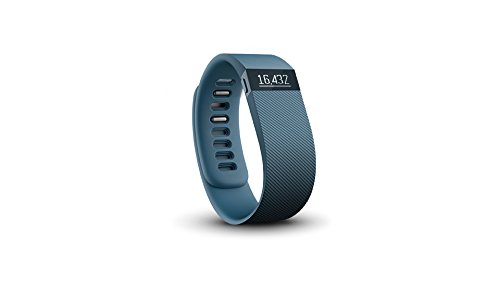 Facebook Twitter Pinterest Email
The Fitbit Charge is looking to be the main activity tracker for everyday types. It fits the bill since it does almost everything. Push your healthy lifestyle forward with the Fitbit Charge Since the Fitbit Charge is going to be worn around your wrist all of the time, it is important that it looks decent or at least simple enough to go with all of your outfits. The Charge is wider than the Flex, but it feels more sturdy since the tracker is built-in to the wristband (unlike the Flex where the tracker has to be removed to be charged). I have the black band (there’s a blue/ gray band available as well). Now that many people have some sort of tracker on, you will be able to tell you have one on. It still has a clasp similar to the one of the Fitbit Flex, but this one is more firm and has yet to unlock on me.

So there are two reasons to get the Fitbit Charge over the Flex. First is because it counts stairs climbed (the Flex doesn’t) and because of the display on the Charge. The Fitbit Charge shows you the time, number of steps taken, distance walked, and approximate calories burned, and stairs climbed (in that order). You can get that all in the tap of the button that’s located on the left side of the screen. The screen shows more than your activity progress though. It gives you notifications of incoming calls as well. The display is a nice upgrade (from the Flex). I find myself looking at it more and more. The OLED display is clear and ver well lit.

It can record some great details of your workouts and diet, such as a run. If you have your phone and Fitbit Charge while you’re running outside, it will give you a map route. If you’re running indoors, it gives you distance and steps. Not a bad feature at all. The Charge is also water-resistant which means it can take on a few splashes here and there. By no means should you be submerging it or swimming with it on. I take it off before showering and doing dishes just to be on the safe side. But the bad thing is that I tend to forget it when I take it off.

You can buy the Fitbit Charge on Fitbit.com or Amazon.com

The Fitbit app syncs over Bluetooth. I love that you can see it real time updates. Once you open the app it will syncs on the spot as well. The progress bars give you an idea of how far along you are and how far you have to go. It’s nice to see the whole picture in a glance. The app is very easy to use and allows for customization and allows for easy input and understanding of what is going on. With the USB dongle, the Fitbit syncs wirelessly to your accounts. This is such a great feature. When devices work without you having to connect, or plug them in it is just wonderful. It can also help you along the way to a healthier lifestyle if you make use of the daily progress and graphs that it provides. You can even get Fitbit premium for better tracking. You can see the status of your tracker’s battery life in the app. It would be nice if there was a way to tell on the tracker itself. The Charge has good battery life. It lasts 4 -6 days depending on use. I usually charge mine on a Friday or Sunday night depending on how busy I am. As long as I don’t have to charge it every night, I am good.

Is the Fitbit Charge boss in activity trackers?

Overall, the Fitbit Charge is comfortable to wear. After a while you forget you have it on. It’s nice when it throws a little vibration party when you reach your step goal. Fitbit definitely knows what they are doing when it comes to activity trackers.They have something for everyone.

After having both the Fitbit Charge and the Flex this year, I prefer the Charge. Having the little screen is a lot nicer. Having steps climbed is a great addition. The Charge is good for those who want the basics with quick access to data. If you’re not ready for the full-on features of a smartwatch, the Fitbit is a small step to the smartwatch phase.

You can buy the Fitbit Charge on Fitbit.com or Amazon.com