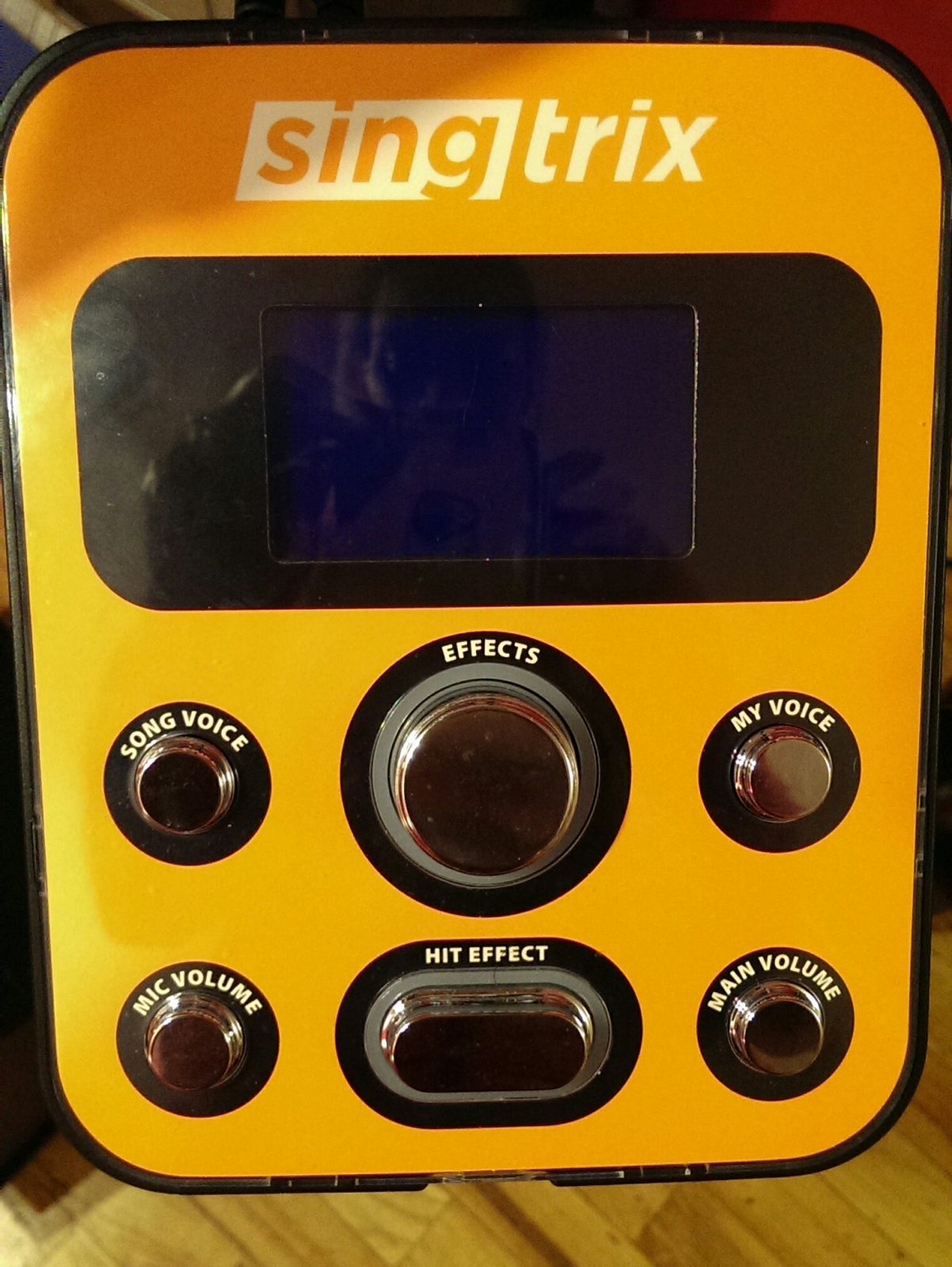 Everyone who knows me, know that I love all things karaoke. So when I found out I would be  reviewing the Singtrix karaoke machine, I couldn’t help but get excited.

For those who don’t know what the Singtrix karaoke machine is, it’s a karaoke machine that have over 300 different presets and voice tunes. The voice tunes are the best features of this machine. After all, it helps you to sing in key so even the worst singer (such as myself unless it’s in the shower *insert laugh*) can shine like a star; Auto tune in full effect! When I first opened the box, I must admit I didn’t know what to expect since I never seen the Singtrix model firsthand. As I started unraveling the package, I definitely wasn’t left disappointed. The karaoke machine comes with the following listed below:

The 40 watt 2.1 stereo speaker produces a very nice crisp sound. You can alter the Treble and Bass to tweak to your liking depending on the song you are singing. In addition to the Treble and Bass knobs, the speaker also have the volume knob located next to the power switch. What I think is really cool about the speaker is, it can double up as your home movie theater speaker as well. With the bonus sub woofer opposite side of the speaker, you will definitely be ready to shake down the room.

Next we have the main attraction, The “Plug and Play Studio Console”. This is where all the magic happens. The Singtrix Plug and Play Console is where you will find all your “Effects”, “Hit Effects” (which is also on the mic), music and mic volume controls. There are three different mic controls in the “My Voice” feature. They are the enhanced (for the beginner), Semi-pro (for as your voice develops), and Professional (for those that don’t need the extra help).

When you play music from your MP3 player or any other device you use that plays the actual artist, you can use the “Song Voice” feature to lower the lead vocals, so that you can take the part as the lead singer.

I want to get into the “Effects” part of the console for a minute. The Effects is where you will find different vocals to play around with. The Effects have over 300 different styles of presets. You can also choose your favorite ones to go back to and use over and over again. I love that in the “Universal Effect”, one voice can produce a duet, or three part harmony or even sound like a full live choir. Also, the use of re-verbs, delays, flangs, low and high tones can give you that ultimate professional feel. You also have fixed key songs that brings full range to the music and your voice. The Presets also come in styles of certain artist music although when you look at the Quick referenced card the machine come with, the name is altered but you still get the drift. Since there is so much range with the included effects; There is no way you can get bored. The array of genres also make this machine a good pick. You can choose from country, to pop, to hop-hop, to rock,and so on and so-forth. So there is a little something for everyone.

Color customization of the console is a great idea. You can change the color to suit your personality or even your mood. The default color you will find on the console is orange, but it also come with additional colors; pink, red, and black. The color plates are cardboard, but all you have to do is slip it under the glass of the console and your set. Usually when you purchase a karaoke machine, you get the standard microphone, machine, and that’s pretty much it. The Mic stand with the boom arm, gives off a sense of your own little home studio. Especially if you decide to connect your headphones to the console. Better yet, nice way to add some fun performance when you sing in front of your friends and family. My daughter love singing to her Equestrian girl tunes hands free.

The microphone is pretty light weight. The “Hit” Effect button is on top. Although the hit effect is also located on the Singtrix karaoke machine plug and play studio console, it’s more convenient if you don’t feel like tapping the button on the console. After all when we sing, we get too wrapped up in the music to really look down at the console for the button. The Singtrix mic also allows you to harmonize to the sound of the console presets. You can hook a second mic to the console, but it will not give you the same awesome effect you receive from the Singtrix Mic.

Device Holder for for tablets, smart phones, and MP3 players

This is pretty much self explanatory. It secures your devices to the stand very well. Whether you prefer horizontal or vertical, you won’t have to worry about your device taking a dive to the floor.

Once you hook your device to the Singtrix karaoke machine console, you will be ready to load up music from your personal device, or download music from the Singtrix app. You can stream music by joining in the Singtrix club for $11.99 per month. You can also purchase song credit packs from $9.99 for 5 songs up to $99.99 for a 55 song credit pack. They also have a free section with limited songs for those who don’t want the commitment of joining the club, or if you want to feel it out before you join. You can also download, and preview before purchasing individual songs. The songs also have the Singtrix preset option that would go along with that particular track. The songs are on Karaoke cloud (just wanted to note that).

I have included some of my pros and cons about the machine below: Pros:
When connecting your headphones to the console,you get a very nice sound. You can also hear the full effects of the presets and your voice. Especially when it comes to harmonizing. Since I can load Comcast to my television at home, I decided to load up karaoke to YouTube. It showed up on the television screen without affecting the Singtrix karaoke machine at all. Usually when you have a karaoke party, folks like to see the lyrics so that they can sing along. And limiting the machine to just a small device would minimize that experience. So I was pleased that this option was available. But, I only tried it with Comcast and that was good enough for me. I almost thought there would be an issue if I had a party and people would be unable to see the lyrics to sing along. I also like the fact that they don’t just limit you to using their app to be compatible with the device. Being able to use your MP3 player, or even logging on to youtube and using the karaoke music from there give you unlimited options to enjoy the Singtrix Karaoke Machine.

Although I really like this karaoke machine, I can’t say I’m hopelessly in love with it. I like the presets, and being able to sing in different styles, but at times I don’t fully hear myself through the speaker or hear the presets. After a couple of weeks of playing around with the machine, my microphone became low. Maybe I just sing too loud? I just wish the mic volume could go just a little bit higher, and I would be satisfied. Also, the price point per song is a little expensive, especially considering you can find some of those tunes on YouTube for free.

Overall I will say this karaoke set is cool, different and invigorating. After working out the tweaks, take your time experiencing what this machine has to offer. After all, it was made by the creators of guitar hero. And, if you enjoyed Guitar Hero as I have, then you will have loads of fun with this machine. The Singtrix Karaoke Machine bundle comes at a price tag of $349.00. You can find it on their website at http://www.singtrix.com/