Orcs Must Die! Unchained Is In Closed Beta 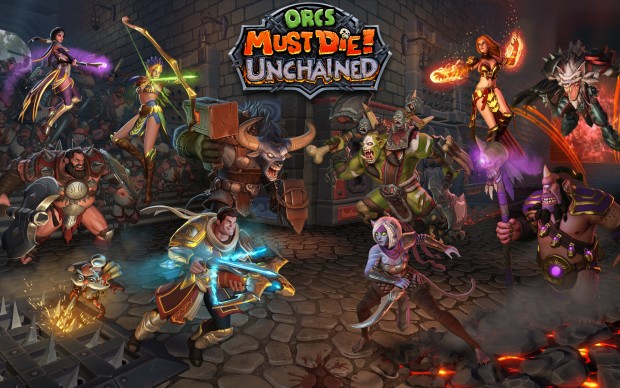 During Pax East, most of you that attend got to try out a new game called Orcs Must Die! Unchained. I was able to get some hands one time with the game, during my hands on experience I played as Ivy. Ivy’s class is Support / Leader, I would heal my team mates as well as my minions during battle, and you can also place different kinds of traps, the traps I would place allowed my team to heal as they walked over it to attack the opposing team. The game offers PvP action, which means you and your friends must protect your base from the enemy. Minions in this game are different slightly different, they still go before you in battle to take majority of the hits, but in this game you can upgrade them once you gather up enough points throughout the game.

If the world in Orcs Must Die! Unchained looks familiar to you it’s because it is set in the world of its fantasy predecessors, years after the finale of Orcs Must Die! 2, but they are new features to this world. -Attack and Defend – White-knuckle Fortress Siege action puts you into the thick of competitive siege warfare. Unleash your minions and charge into the heart of the enemy stronghold and build an impenetrable gauntlet of traps to hack, grind, flatten, gibletize and incinerate your foes. Your team must master both tactics to triumph.

-Choose Your Hero – Dozens of unique and powerful heroes offer deep gameplay options at all skill levels. Old friends the War Mage and Sorceress return to face new enemy heroes like Blackpaw, Midnight, Stinkeye, and Bloodspike. Whether players prefer might and majesty or scum and villainy, there’s a hero for everyone.

-Collect & Customize – Collect and upgrade powerful heroes, over-the-top weapons, devious traps and fiendish minions. Build an arsenal from an enormous variety of options, and customize a strategy for every match. New heroes, weapons, traps, and minions are continuously added, and your collection will never stop evolving!