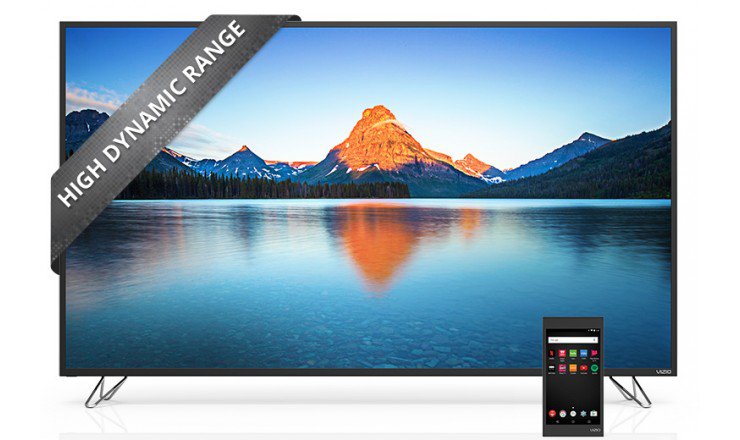 The Vizio brand is a trusted affordable television brand. They have a reputation of low prices yet qualitative TVs. I bought my first Vizio flat screen TV about 6 years ago. That TV is still running fine and I’ve personally grown to trust the brand. I was ecstatic when Vizio offered to send over at 50 inch M  Series SmartCast TV. I had not upgraded my TV in years and this was a great way to update. 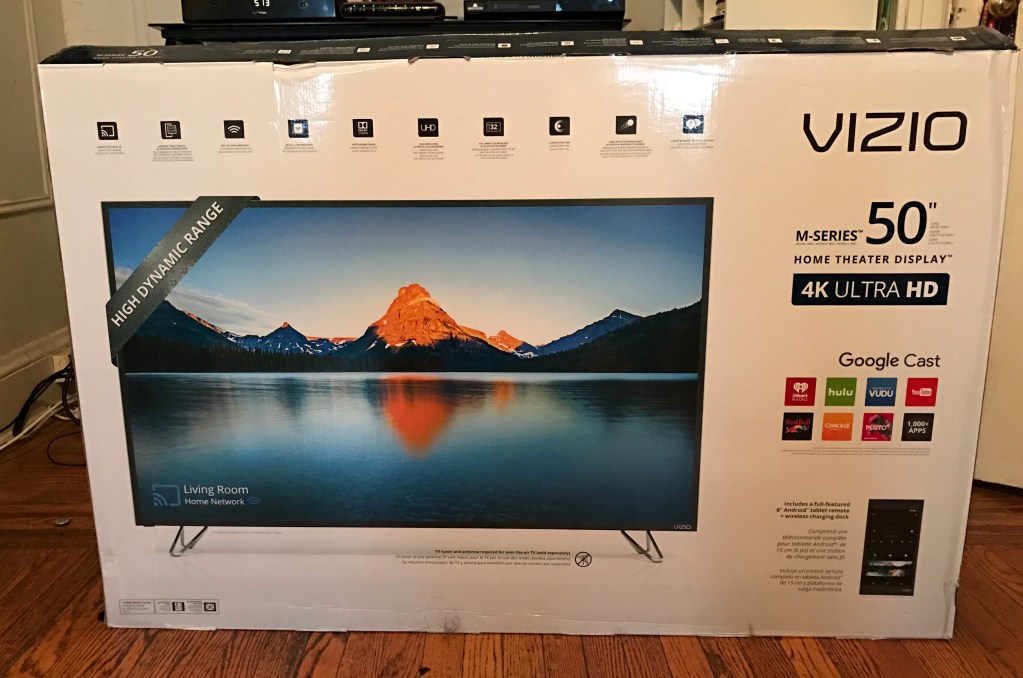 I’ve seen a few of the Vizio models (E, M, and P series) at launch events. Of course it is different to see a TV for a few minutes versus using it day to day. After using the SmartCast TV for several weeks here are my thoughts. Take a look at the specs below to get an idea of what I am working with. 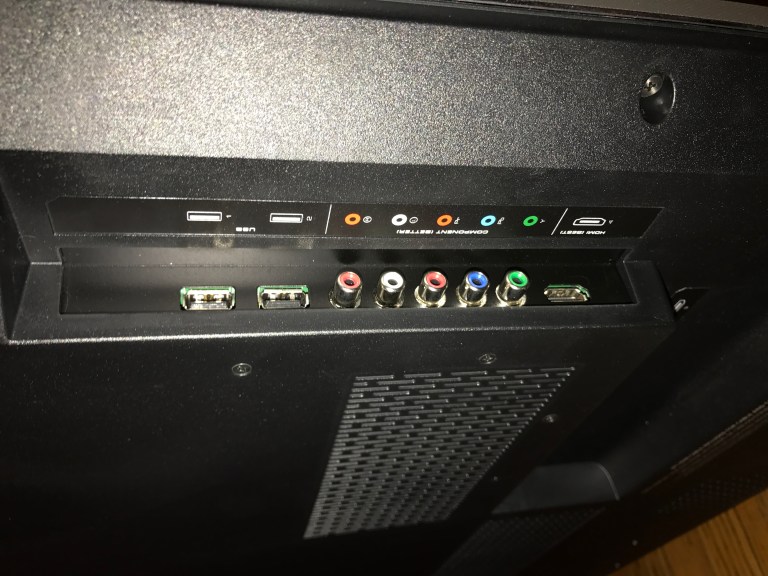 The Vizio M-50 Smartcast TV has a very simple build. In this case, less is more. It has inch bezels all around. The legs (if you choose not to mount the television) are chrome bars at a slight angle. They sort of look like thick metal clothes hangers. The display is not curved. The setup, which is mostly screwing in the legs was quick and easy., You just need a screwdriver. You might also want a pair of hands to help move the TV, although if you’re really careful you might be able to carry it yourself.

When looking at the back panel of the TV the ports are to the right side. You have 4 HDMI ports, 2 USB, 1 ethernet port. I was happy to see the component jacks as well since I still have my Wii to connect. The back is molded in a way to sort of curve the cables in one direction which is something I appreciated. It helps out in keeping the cables bundled and in overall cable management. I am not a fan of the random spaghetti look. 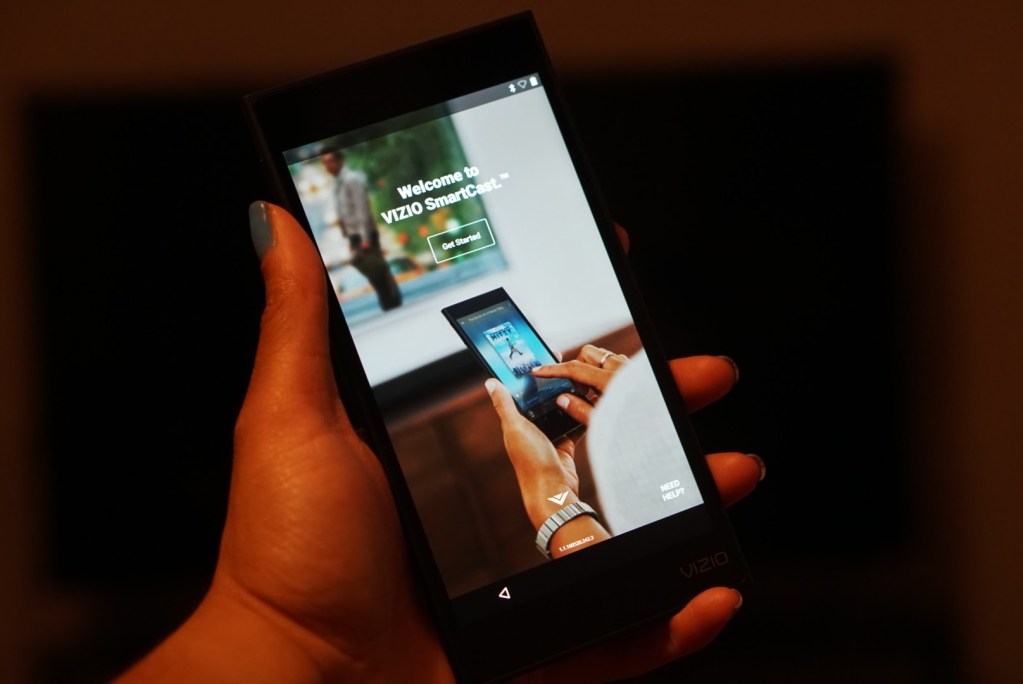 The M 50 SmartCast TV comes with an Android tablet remote. The Android tablet has a 6 inch display. You can access all of the television settings. If you’re familiar with Android OS you will find maneuvering through the remote to be quite easy. The tablet charges via microUSB as well through the supplied wireless charging dock. 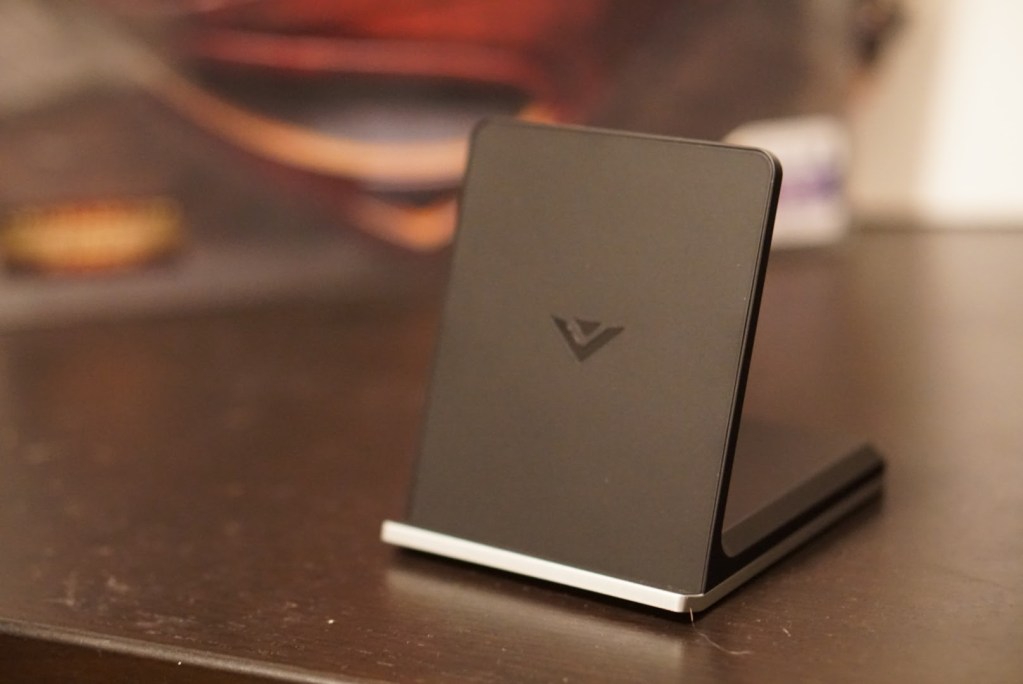 The wireless charging dock looks pretty nice and enhances the look of the setup. Also, the ease of just placing the tablet remote on the dock and having it charge is nice. I was adamant about placing the remote back in the dock whenever possible. I did not want to lose it. The 6 inch tablet has a 720p display. The display is nice and you won’t be disappointed that it’s not full 1080p HD since you won’t be looking at it often.

The main point of the Android tablet remote is using the Vizio SmartCast App. But you can also do the basics such as power the TV on/ off, control volume and change picture settings with it as well. You need this tablet remote for all settings as the traditional remote that comes with the TV only controls standard functions such as volume, channel, power and input changes. Vizio is trying to make it easier to navigate settings (assuming you find it easier to use your phone) instead of navigating the settings on TV. 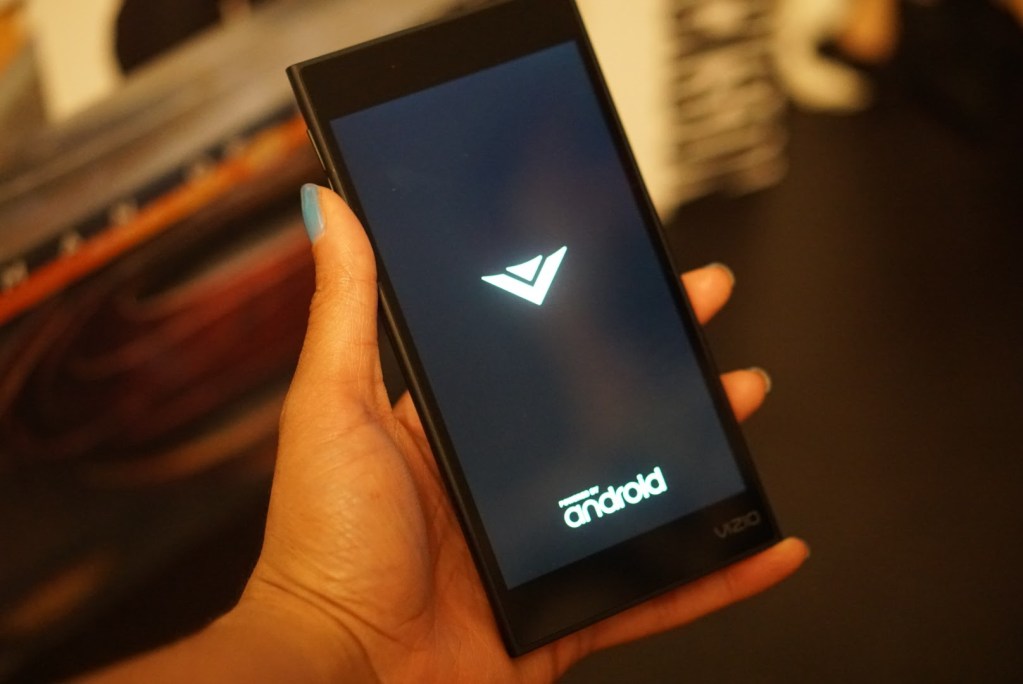 It took me a bit of getting used to. Although I use phones often, I am used to on-screen menus (on televisions). But it did get easier in time to use the tablet remote, especially when I didn’t have my glasses (I am near-sighted). Not having to squint across to the TV. But there were times the traditional remote worked better. It’s nice to just grab the remote, feel your way around the buttons and put the volume up or change the input without looking.

So what is the Vizio SmartCast App? The SmartCast app allows you to sort of organize all of your online content in one app. With the SmartCast app you can discover and cast shows to the TV. Since the SmartCast tv has Google casting built-in, you won’t need a Google Chromecast to cast content. If you cast often, the process is the same. There are a lot of Chromecast enabled apps. I mostly use YouTube and Netflix, but other apps are available too such as Hulu and Cracklen (unfortunately you can’t cast the Amazon app). You can look up all of the Chromecast capable apps HERE. 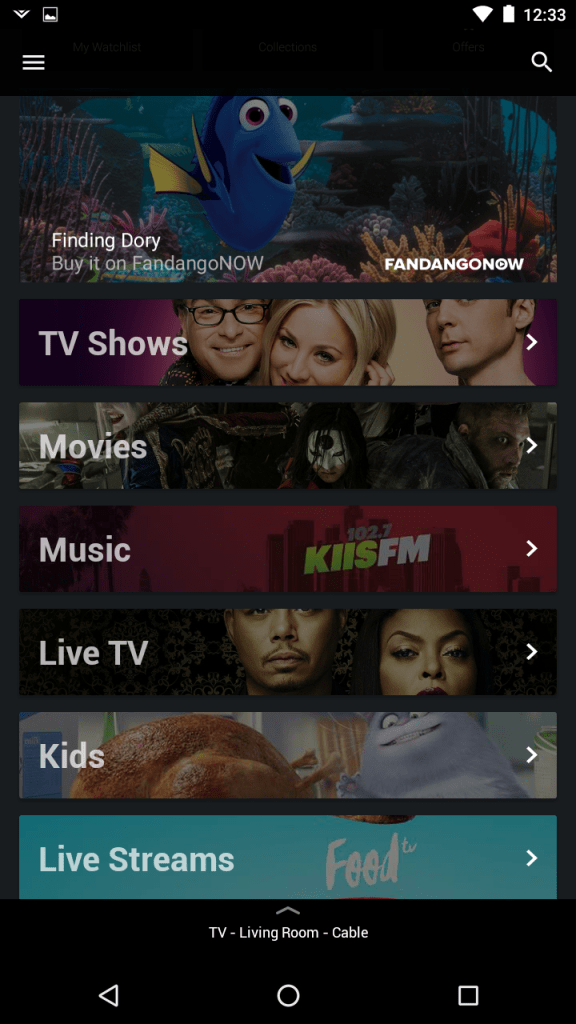 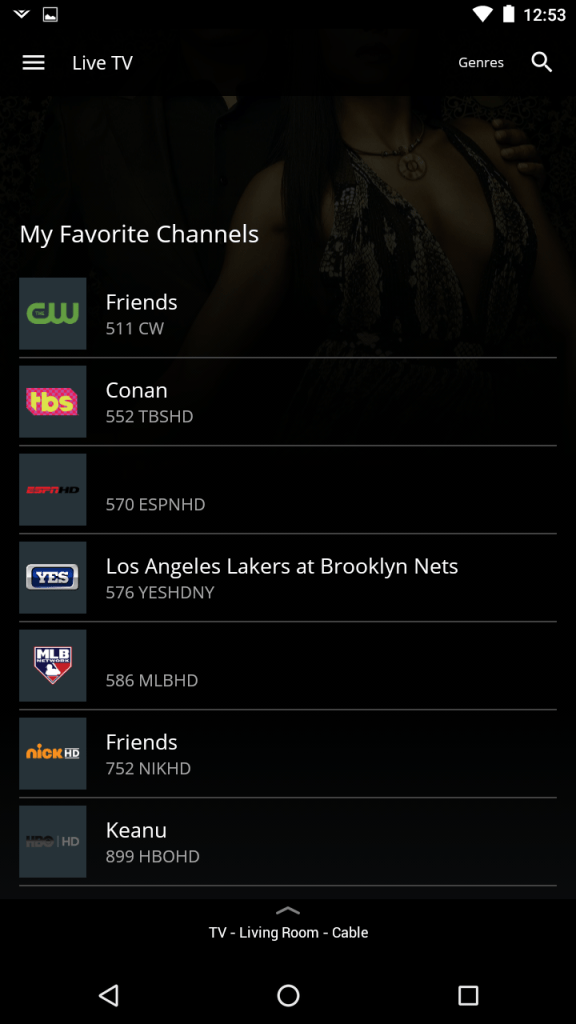 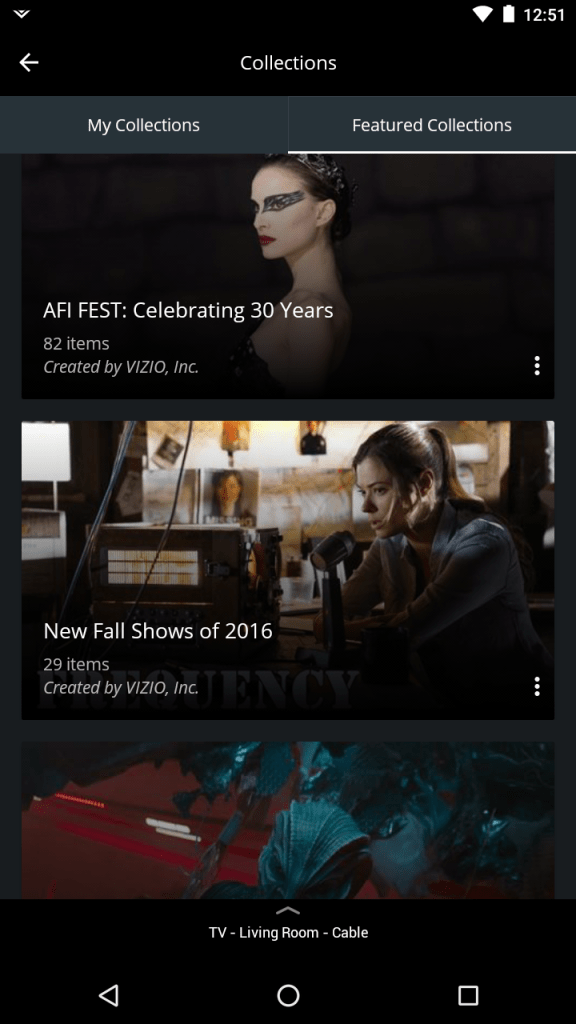 I am a fan of the universal watch list Vizio puts together of shows. That way you don’t have to look up all of the shows separately across the apps. Searching for content across multiple apps at once is so helpfI do wish HBO Go and Netflix were included in the universal list of apps. I am hoping with future updates they will be added to the list. The app glitched on me a couple of times, which wasn’t so bad; but in the moment was frustrating. The UI is friendly but can stand to be a little more fluid. The app works very well overall. With so much content out there, it’s great to have it all in one place. 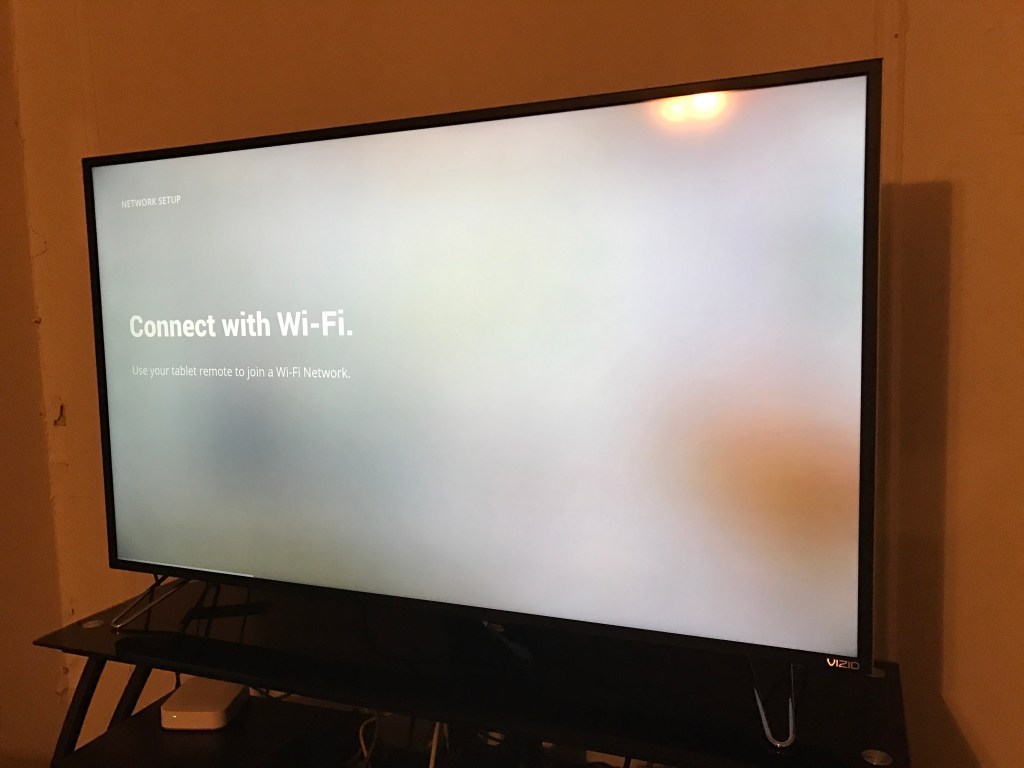 Describing and taking pictures of the Smartcast M 50 display is difficult to do. Although I haven’t upgraded my personal television in several years, I have been to many launches so I am aware of what the latest TV releases look like. Overall I have to say the picture quality on the M series is great. You can adjust to preset picture settings such as vivid, standard, computer, or game. If some of the settings look off, you can tweak them to your liking, The backlighting in “Calibrated” mode looks great. While viewing angles wouldn’t be a problem in my small New York City apartment, that might not be the case for bigger places. If you’re too off to the side the picture isn’t as clear.
It’s great to watch content in 4K HDR. It’s hard to go back to regular HD afterward. Too bad there is not more 4K content out there.

I wasn’t blown away by the speakers on the M-50. They’re not bad at all, but you won’t get theatrical sound from the speakers alone. I suggest getting an additional soundbar if you don’t want to go full on with a home theater system. I will probably by the new Vizio soundbar to add to the entertainment center. I live in a noisy neighborhood where the extra sound is needed more than usual.

After searching for the TV for a few weeks the cheapest price I’ve seen it is at $669.99. Retail price is $849.99. That is a great price for a 4K TV with HDR. The price goes up for the same series in larger sizes. The M series goes up to 80 inches which is still affordable considering the size and price.

It will hard to find great 4K HDR picture quality for the price of the Vizio M series. i am impressed with the overall performance. I have continued trust in the Vizio brand. It’s quality and price combination that’s hard to beat. You can learn more about the Vizio M series HERE