Facebook Twitter Pinterest Email
This year the Galaxy S9 and Galaxy S9+ do not only differ in size, they differ in RAM, and rear cameras. So why do I prefer the S9+ over the S9. Read to see why I think the S9+ is a great device.

For the last month I’ve been using the Galaxy S9+ from Samsung and comparing it with the Galaxy S9 here and there to see what the major differences were. If you’ve read my reviews before, you know that I prefer Samsung’s Note line over their Galaxy S line, but the S line is not far behind the Note line anymore, like it was a few years ago. I gave you a bit of my hands-on impressions of the S9 and S9 Plus several weeks ago. I ended up using the Galaxy S9+ more than the Galaxy S9. Thanks to Verizon Wireless and Samsung for sending them over by the way! Here’s my review of the Galaxy S9+ and why I enjoy it more than the smaller S9. As always, refresh yourselves on the specs below before we continue. 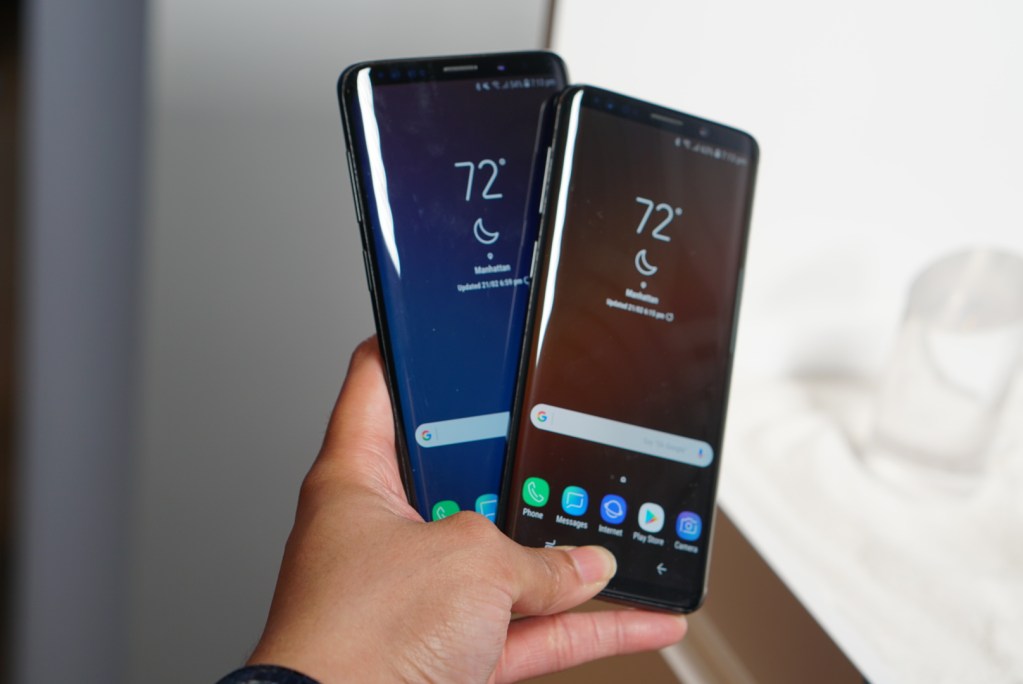 At a far glance you wouldnt be able to tell the difference between the Galaxy S8+ and Galaxy S9+; at least when looking at them from the front. You still have the full infinity display. The dedicated Bixby button to the left of the display. Above the Bixby button you have the volume rocker. On the right of the display you have the power button. On the bottom border you have the USB-C port in the middle, and the headphone jack to the left of it. Just like the S8, S8+, and Note8, you won’t find a home button. 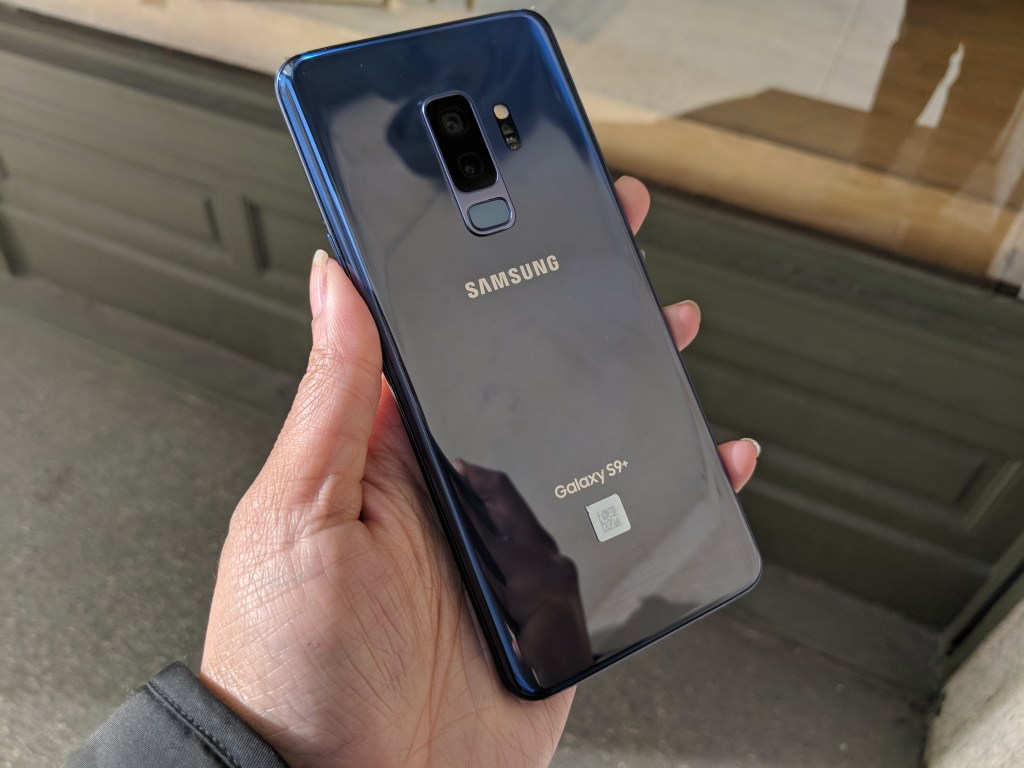 Flip the phone to the back and you will see the differences between the S8+ and S9+. It seems that Samsung listened to the consumer complaints and changed the placement of the fingerprint scanner. It’s below the cameras (remember, the S9+ has two cameras, while the S9 has one). Samsung did introduce this beautiful looking Lilac color on the S9 series. It’s just beautiful to look at.

Like with most of the design, Samsung built on their S8 UI. If you’ve used Samsung’s UI before, you won’t be surprised with the UI experience in the S9 and S9+. Samsung has really honed their Samsung Experience (formerly known at TouchWiz). With every generation, the UI gets fined-tuned more and more. The Galaxy S9 comes packed with features, as expected from Samsung, and if you’re not familiar with navigating Samsung’s menu’s you might get confused with the many options available. Let’s not forget the Galaxy S9 adn S9+ have great features such as fast wired and wireless charging (Samsung has a great charging pad), the phones are also IP68 water and dust resistant. I would slap a case and screen on these phones ASAP. The phones are super slippery and it’s scary as hell when you have a “near fall” experience. These phones are too beautiful to be cracked. 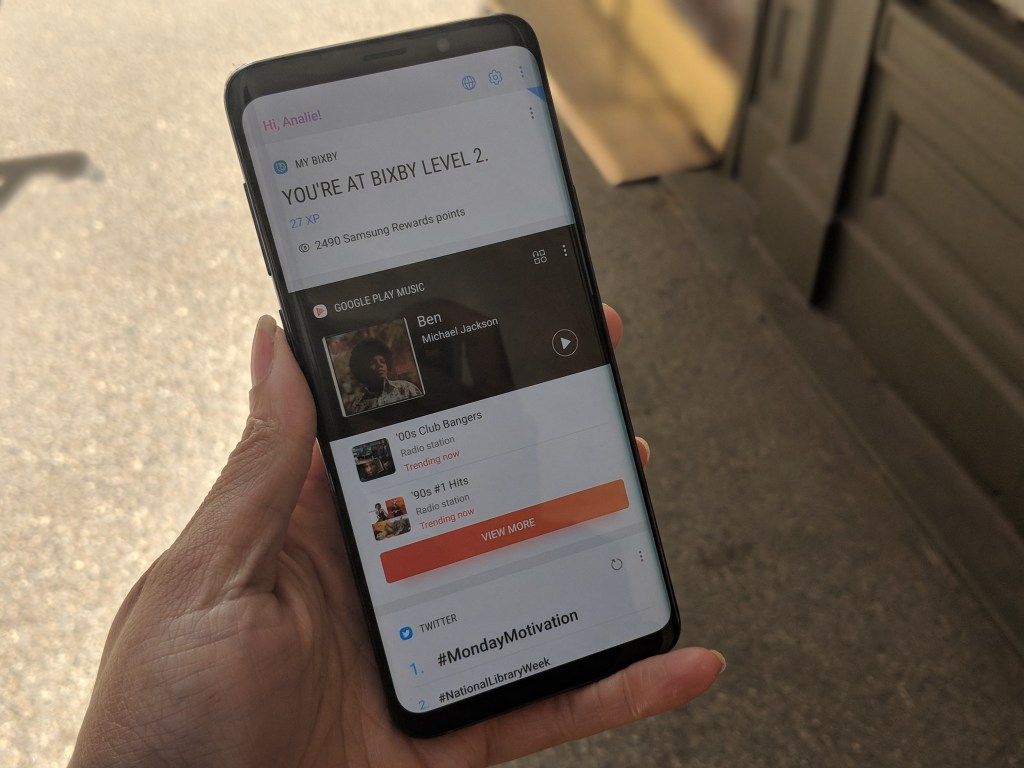 As usual the Samsung display is captivating. The 6.2″ display just so colorful and bright. You can use it with almost no hassle outdoors on sunny days (with max brightness, of course). The S9 is slightly smaller at 5.8 inches, but it’s still a whole lotta screen.

Samsung brought stereo speakers to the S9 and S9+ that sound amazing. If you’re a person that consumes a lot of content sans headphones, you will appreciate the front-facing speaker. The speakers sound a whole lot better and louder.

The Galaxy S9+ is the first of the S line to have dual rear cameras. The regular S9 still has one camera. The S9+ camera is great, as expected. Samsung introduced some new features such as Super Slow-Motion capture (captures slow-motion clips in up to 960 fps). For the slow motion to look nice, you need a lot of light. You can check out one in regular indoor lighting. Slow-mo is gimmicky but always fun when it works.

Live Focus (allows you to take pictures with the blurred background effect), which we first saw in the Note8 is now available on the S9+. Like with the super slow-motion feature, the Live Focus works better with lots of light. Just because you need a lot of light for Live Focus and Super Slow-motion features, it doesn’t mean that the Galaxy S9+ slacks in the dark. You’ll find the low-light pictures taken with the S9+ to be exceptionally crisp. That’s nice to have when you’re out to lounges or out in poorly lit places.

Like I mentioned in the build description, Bixby is still there. You can deactivate it, but can’t make the button do anything else. I tried using Bixby for the fun things, like translating signs in real time and my fave, trying on makeup with products that are available at Sephora.

As you can see, Bixby translates literally or incorrectly. There was no way for me to verify if the translations were correct. When I translated Spanish to English it did work well.

AR Emoji is Samsung’s way of personalizing GIFs. While I don’t think the software is great at getting an exact replica of my face, it’s a fun little feature to have. AR Emoji stickers are fun to use in a chat, but it’ll be a bit before they get used as much as regular pop-culture gifs. You can have a fun time with it, but it’s not a deal-breaker nor a must-have feature. It needs to be refined to look less creepy and inviting to use. Hopefully version 2.0 of AR Emoji on the Galaxy Note 9 is better

One of the main reasons, I usually go for the larger version of a phone series (Galaxy S8+ or Galaxy S9+), is the larger battery. I am out and about for at least 11 hours a day on the regular. I snap pics of nearly anything and everything, stay on social media (at least 3), Slack, Google Hangouts, Messenger; so I need the battery to last. Obviously, the S9+ does better than the S9. I am hoping Samsung goes with larger batteries next year. My battery life ranged from 7 – 9 hours. As expected, everyone’s use will be different.

Verizon provide the cellular service on the S9 and S9+ devices I used. In New York, Verizon is very reliable. While some my find their service to be on the more expensive side, they have different tiers of data plans and family plans for every budget. Verizon came in first again in RootMetrics testing. From RootMetrics: “In addition to winning the RootScore Award for overall performance, Verizon also won United States RootScore Awards outright in the categories of network reliability, network speed, data performance, and call performance. Verizon shared the Text RootScore Award with AT&T and Sprint.”
You can learn more about the testing and results here.

The Galaxy S9 and S9+ are always expensive right at launch, starting at $815 and up. I am an advocate for waiting a few weeks to score a bundle deal. It’s almost guaranteed to happen. Carriers usually have deals for pre-order and launch too. Right now there are bundle deals that bring a wireless charging pad and Gear IconX (2018) earbuds in the package. Check the links here for more details. 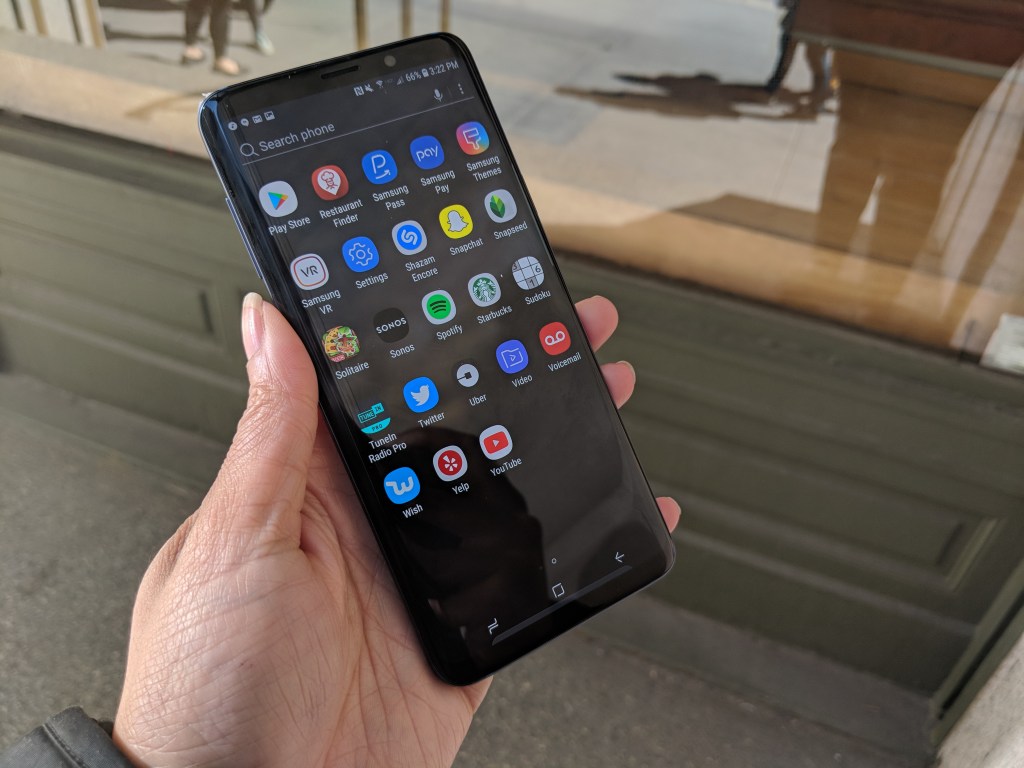 Samsung doesn’t disappoint with their first flagships of 2018. You won’t find many new things worth paying for if you own a S8 or S8+. Those phones are still great, a year later. If you are on the Galaxy S7, I say it’s time to make the jump to the infinity screen. The better placement of the fingerprint scanner makes it easier to unlock and you will enjoy the beautiful screen and stereo speaker combo. The Galaxy S9 isn’t worse the S9+, I prefer the larger battery and screen, even though the regular S9 is easier to handle. You won’t find a big jump in the speed (going from 4GB RAM in S9 to 6GB RAM in S9+), or in the crispiness of the pictures. Both S9 and S9+ are a safe bet, but battery life and Live Focus are enough for me to go with the larger device.