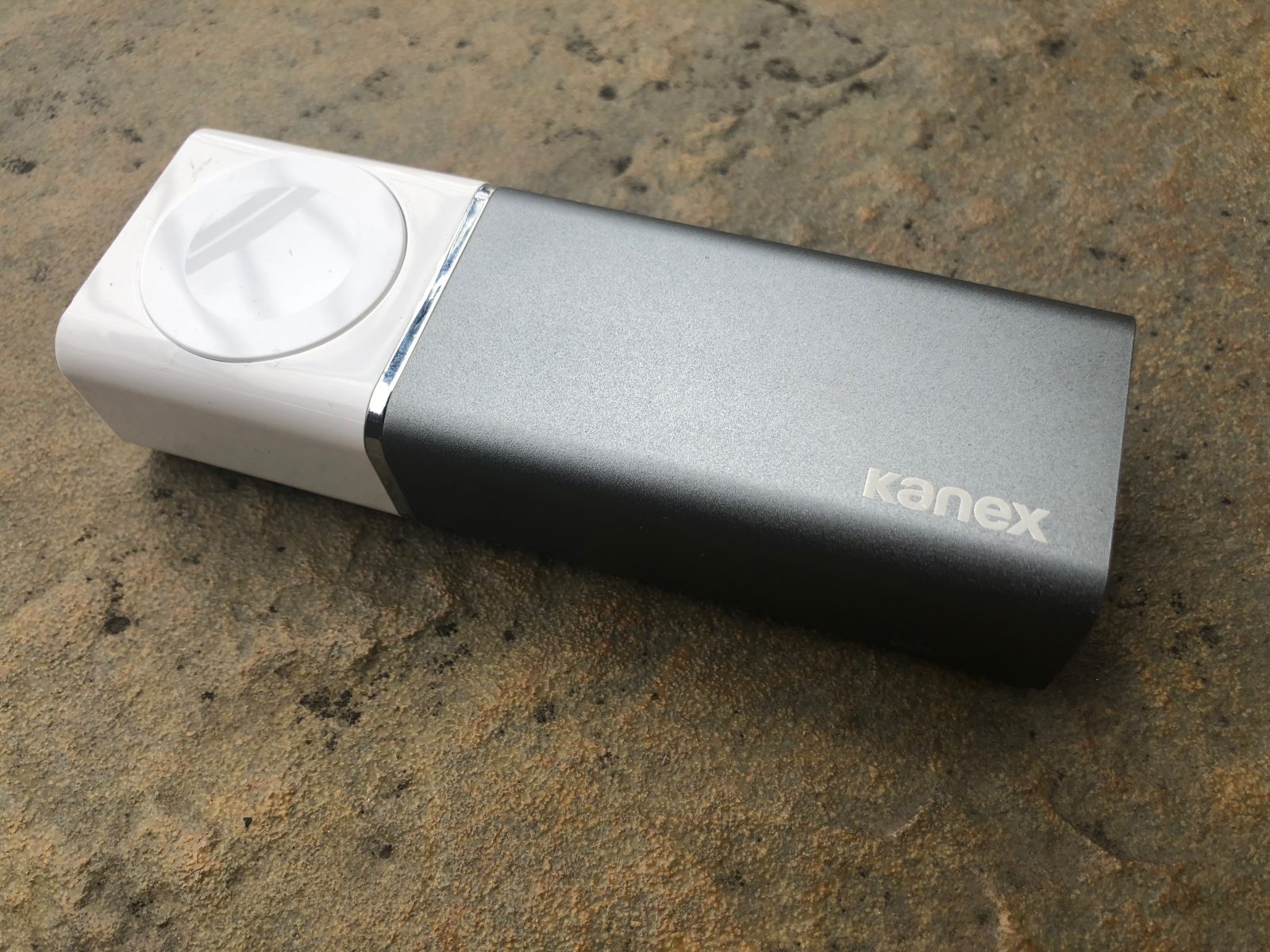 I travel a lot, so I subscribe to a separation of church and state approach for my chargers and wires. Specifically, I like to have a set of chargers that I keep at home (I have power bricks in strategic locations throughout), and a set that I keep in my tech travel bag. This way, if I accidentally leave behind something while abroad, I’m not stuck without a replacement when I get back home. I still didn’t have a solution for my Apple Watch and I knew it was a matter of time before I either lost its original wire or left it on a nightstand in a random hotel. So I was excited to try KANEX’s Go Power which serves not only as a portable battery for both the Watch and an iPhone, but could serve as a secondary charging plate and save me from having to pack up the original cable.

The GoPower Watch Plus is pretty light, weighing about the same as a pack of cards. It has a blocky rectangular form factor so it still may be too big for a pants pocket, but you can easily fit this into a hoodie pocket, bag, or other pouch without weighing you down. The battery includes a USB-A and microUSB port, along with a power button that allows you to view the current level of charge left in the GoPower Plus. And despite the model name, you could also charge an Android or tablet with the GoPower Battery as long as you have the right cable.

Charging speed is fast. When my iPhone 8 Plus battery was low, I plugged it up and observed about a 2%-2.5% increase each minute. I went from 14% to 38% in about 15 minutes. I would presume an even more efficient battery charge if my phone was on airplane mode. The Apple Watch charging experience was similar. The magnetic connector worked as expected and there were no bad surprises. I’m all about efficiency, so being able to charge two devices at once while knowing the battery would conserve itself once the devices were at 100% was a great feeling.

While I enjoyed the uniqueness of a portable battery that could charge both my Watch and iPhone I soon discovered that this accessory has many doppelgangers — or more accurately it is the doppelganger. Interestingly enough KANEX’s GoPower Watch Plus is practically identical to Belkin’s Valet Charger, down to the feature set and color scheme. But the Belkin version is 6700 mAh, offers a 1.2A USB port and 2.4A charge current for $99.99; while KANEX’s model is 5200mAh, offers a 2.1A USB port and a 2A charge current for $79.95. Which means that while the Belkin version has a larger battery and thus can hold more juice, it will take longer to deliver a charge to your device.

All of this said both manufacturers claim their respective dual portable batteries can charge Watch up to eight times before the batteries themselves need to be recharged–which kinda doesn’t make sense. So this leads me to believe that extra $10-$15 you’d be paying for the Belkin is for the brand name and the assumed reliability that goes along with it. But what’s the point when you can obtain identical or better results with the GoPower version for less?

Overall the Kanex GoPower Watch Plus Portable Battery is a convenient and stress-free accessory that makes a lot of sense to purchase if you own an Apple Watch. While I still believe the MSRP may push this out of range for some, especially because there’s plenty of other, cheaper portable battery options for Watch; you’re still getting great value out of it.