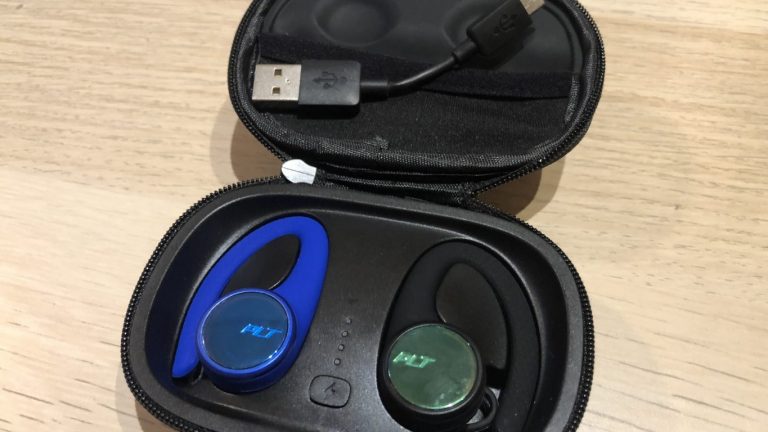 The Plantronics BackBeat FIT 3150 boasts 24 hours of power, durable, and can withstand rain and sweat for an active lifestyle. But is it true?

The BackBeat FIT 3150, released Fall 2019, retails for $149.99 and is billed as true wireless sport earbuds. Right out of the box, you get the Backbeat Fit 3150 earbuds, which are housed in a somewhat bulky, yet functional charging case and a short, 1.5-inch micro-USB charging cable.

The case is covered in a smooth matte black material with a shiny ”PLT” stamped on the front. While it felt good in hand, the case is a bit too big to fit comfortably in the average pocket without it looking silly. That said, the case does zipper shut to add more security and has a tiny internal pocket for that tiny microUSB cord. Inside the center of the case is a power button that, when pressed, triggers a series of lights that indicate the battery level. Thankfully, the earbuds were fully charged and the case itself had about 75% charge, so I was able to use them straight away. It’s also a nice touch that every time you power on the earbuds you’re greeted with a voice that provides a status of the current battery level.

I’m happy to say that the earbuds are lightweight, sturdy, and are incredibly comfortable. To increase stability they wrap around your ears versus just being plugged into your ear canal which was a huge plus. The earbuds remained secure on my runs and while riding a scooter around town. Though these models mention that “The unique ear-tip design doesn’t fully block the ear canal, letting in ambient sound…”, I experienced a significant muffle of sounds from the outside world. Anyone that was talking to me I had to ask to speak up repeatedly. It was enough where I was concerned upon stepping out in the NYC streets that I couldn’t fully hear any potential hazards. In addition, I got lots of complaints of “static noise” when making phone calls and was told it sounded like I was on a walkie-talkie. While I was able to be heard, apparently the static was enough for the other person to ask me not to speak with them for long periods of time if I was going to use the earbuds.

My initial music playback experience was not good. Any song I played sounded muddy and stuck in the depths of bass, with a far away sounding tone. However, this was immediately fixed after downloading the new firmware from the BackBeat app. Plus the three EQ settings in the app helped to provide further clarity in the audio. Once resolved, the music quality was normalized and I felt it was a good listening experience. If you’re planning on getting these, definitely download the app for a better experience and access to more functionality.

Plantronics notes that the earbuds have up to 8 hours of battery life (90mAh battery) built-in while the charging case offers up to 16 hours (740 mAh battery). In tests, I was able to get about 7 hours of charge, while using the earbuds nonstop for music and calls, frequently adjusting volume and playing a movie. Since that’s an average work day I felt that battery life was pretty impressive. Though the size of the case leaves something to be desired, it is indeed designed just big enough to fit the shape of the earbuds–so it’s a tradeoff. The battery capacity made me get over the case size as if the earbuds were running low I could easily get another couple of charges from it. In fact the charging was pretty fast. At one point I had limited time and could only afford 12 minutes to charge the earbuds, which resulted in another hour of power.

The bluetooth connection of the BackBeat FIT 3150 was good and never dropped. The 98-foot range gave me enough peace of mind that I’d always stay connected, even if my phone was further away. You definitely need to read the Quick Start guide to connect the earbuds as the process is a little roundabout, but once you do it’s generally smooth sailing. Even when I switched between my AirPods, the FIT 3150 bluetooth connection recovered in a short time.

Response time between the app and the touch controls (called “Taps” and on the left earbud) on the earbuds themselves were swift with no lag. The Taps setting was fairly convenient, offering a way for the user to map specific controls to the left earbud based on one or two taps. For example, one tap could trigger the unit to tell you the current time, where two taps launched Siri. At the time of this writing, there are 10 different Tap actions that could be assigned to the left earbud. It should be noted however that if you opt to use the Taps feature, you lose Volume adjustment functionality and vice versa.

At the end of the day, the Plantronics BackBeat FIT 3150 are great choices if you’re looking for wireless earbuds that won’t slip off even at your most active and provide good audio quality. You’re fine tossing these in your gym bag without much worry that you’ll run out of battery or that they’ll be damaged by moisture due to the unit’s IP-57 waterproof rating (waterproof in fresh water for up to 1m for 30 minutes). The BackBeat FIT 3150 earbuds come in all black or black and blue finishes.

I’ve reviewed a few other true wireless earbuds. You can check them out right here. 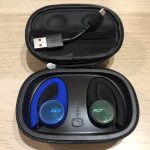