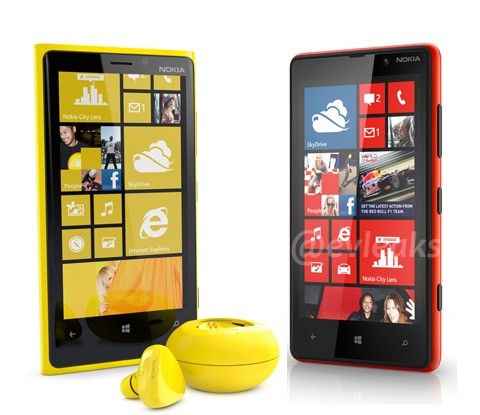 We all remember how different the Nokia Lumia 900 looked alongside other flagship phones. Nokia stayed with the the Lumia 900 concept and enhanced it with features that will maximize your introduction and experience with Windows Phone 8.

The screen got a bit larger with a stunning curved Gorilla Glass 4.5” WXGA display that uses Nokia’s PureMotion HD+ screen technology. It has a dual-core Snapdragon processor and 1 GB of RAM. For storage you have 32 GB. The phone might seem a bit large given its size and bold rectangular build; but it also feels sturdy and tough. I don’t think it’s much of a sacrifice for a pretty looking, large screen.

Realizing the heavy use of the smartphone camera Nokia focused a lot on it. The Lumia  920’s camera is 8 megapixels and of course has Carl Zeiss lens like its predecessor. Nokia claims it works well in low light and it will be possible to snap clear pictures in near darkness. The OIS (camera’s optical image stabilization) eliminates vibration; meaning you can take a crisp and clear picture while in motion. That’s useful for sports events, and little children running around. There’s a suite of add-ons to enhance pictures.

A major feature that we’re finally happy to Nokia and Microsoft confirm; is the wireless charging. So far the accessories introduced at today’s launch event are from JBL and Fatboy. Charging pillows, soap-bar docks, wireless speakers and headphones; come in a variety of colors. You will soon be able to charge you phone in Virgin Atlantic lounges, and The Coffee Bean and Tea Leaf locations. You may look at the phones and see them to be strikingly similar but don’t be fooled; there are major upgrades. So, what is the difference between the Lumia 900 and the Lumia 920? Here are a basic few; it also has more storage and 1 GB of RAM. The Lumia 920’s bigger screen size over the 900, and it’s PureMotion HD+ IPS LCD as opposed to the Lumia 900’s AMOLED screen. Windows 8 along with this screen size allows you to add more live tiles and resize them to fit nicely. For connectivity it has Bluetooth 3.1, NFC capabilities, and wireless charging. Something I really liked is that you can use it with gloves on and it’s sensitive to fingernails as well.

And of course the differences between the Lumia 800 and the Lumia 820 are along the same lines of the Lumia 920 upgrades. It has a dual core 1.5 Snapdragon processor and 1 GB of RAM. It added a front-facing camera (VGA). It also boasts a bigger battery and you can also charge it wirelessly. While it has only 8 GB of storage you can add microSD.

Nokia is looking to enhance “Navigation” apps There’s a suite of navigation apps designed to work hand in hand with the Nokia handset. Nokia Maps, Nokia Transport and Nokia City Lens, they will even work offline. Functions and tweaks I’m sure will be enhanced by the release date. Can’t wait to test these out – offline!

We’re excited to see what the finished product will be and how it will work with other Windows 8 devices. So far the Nokia Lumia 920 has all the signs of a great flagship phone. The phone is bold and innovative. When looking at this phone you can tell it wants to look and most importantly be different than the other phones out there. From the launch event; the OS seems to be responsive and flowing nicely. No word yet on the official release date and pricing for the Lumias. Stay tuned for more!