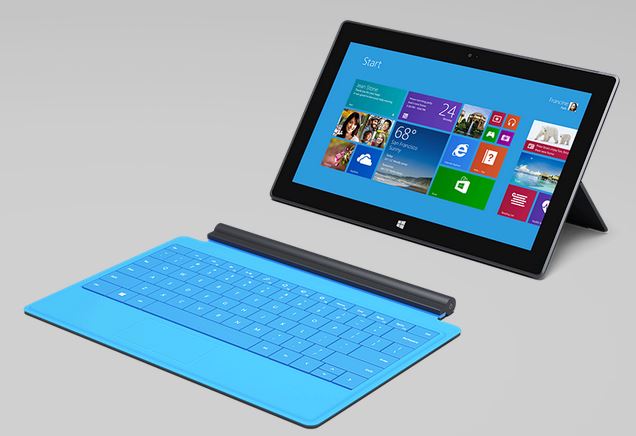 Facebook Twitter Pinterest Email
You can now pre-order the newly announced Microsoft Surface 2 and Surface Pro 2 tablets. Find out the details regarding pricing, specs and available accessories inside.

Like usual second generation upgrades the Surface 2 was lighter and thinner than the first one. The 10.6″ tablet is a productivity type tablet in my opinion. Surface 2 is the most productive tablet for personal use. It offers all the entertainment and gaming capabilities you expect from a tablet, along with the ability to get work done. Powered by an NVIDIA Tegra 4 processor The Surface 2 runs apps quicker and smoother, increasing battery life to up to 10 hours for video playback. The 10.6-inch ClearType Full HD display now renders 1080p video for enjoying shows and movies, and its full-size USB port has been upgraded to USB 3.0 for up to four times faster file transfers.

Camera resolution has also increased, with a 3.5-megapixel front-facing camera and 5-megapixel rear-acing camera, both cameras can record in 1080P and work great in low-light areas. Even with these and other upgrades, Surface 2 is slightly thinner and lighter than its predecessor. The Surface Pro 2 is more of a powerhouse. This is the Windows 8 tablet you want. It is more like a tablet PC. The Surface Pro 2 runs the full version of Windows 8. The Surface Pro 2 gives you more productivity in tablet form. With the 4 generation Intel i5 processor, the Surface Pro 2 is super fast. The 8GB of RAM helps with the ultimate multi-tasking.Microsoft even claims that it’s 95% faster than other ultrabooks out there. It can even be used for editing ultra high definition video footage. Microsoft demonstrated by using the rare Red camera. They showed the external display on a Ultra HD 4K TV. It looked beautiful. The Touch Cover for the Surface was pretty impressive. With a lot of new sensors, the Type Cover picked up my key strokes effortlessly. I didn’t feel like I had to try hard to type. A great improvement is the the keyboard is now backlit. The Touch Cover will go for $129.99 You Can Pre-Order the Microsoft Surface 2 and Surface Pro 2 TODAY:
http://www.Surface.com/pre-order.