Where do pro players train? A question that I’m always being asked. Many think that they are in this one big house, something like you would see in the Real World, but that’s not the case. During the ESL One Dota 2 tournament held at New York’s Madison Garden, I was able to sit down and talk with Nvidia’s Director of Global eSports, James Grunke. While discussing how pro players at ESL One were using Nvidia’s G-sync monitors, he started to talk about how the company has opened a GeForce eSports Studio. The studio emulates tournament conditions, where pro players are invited to practice on Nvidia’s GeForce equipment and give the company their feedback on the products.

What does this eSports studio have exactly? Well, let’s start off with the 4k monitor, streaming equipment, 5v5 face-to-face set-up, with g920 cameras for streaming, falcon northwest towers with 980 and G-Sync monitors. A white board is provided so teams can write out their strategies. The camp also has a cafeteria that has a 40ft skyline where players get three meals. Players usually play for about 10-14 hours a day, so the camp offers free food and sports drinks 24 hours a day. James Grunke says, “we give them the run of the studio it’s all about being focused.” Which is why Cloud 9 even tweeted, “we contribute a lot of things to our success, but one of the key things for our North American championship was the time we spent at boot camp” and thanked the company for their time there. Cloud 9 spent time at the GeForce eSports Studio right before winning the championship. Other teams such as INTZ a Brazil League of Legends team have also practiced at the camp. 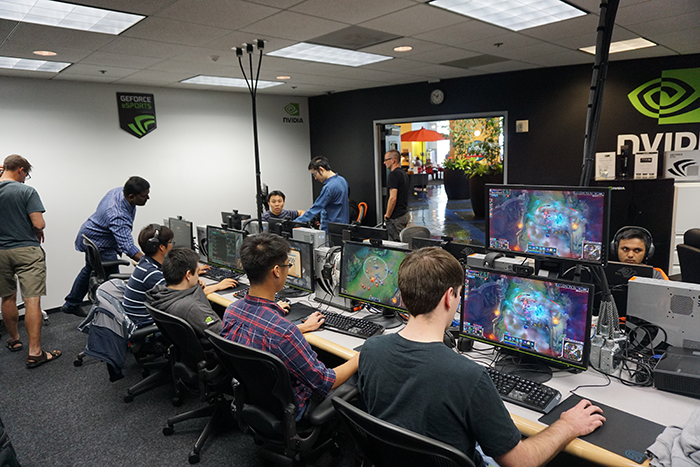 Teams are invited by the company to practice at this state-of-the-art studio, they usually stay for a week where they are housed at a nearby hotel. But pro players are not the only ones who get to have the run of the studio. The company has employee gamer day, which starts on Thursday during lunch and Friday night. This allows employees to cut loose and indulge in all the cool gaming products that are around them. I asked James if there were any plans for opening up more studios, he response was, “Would love to see one in Europe and Asia, but do we have plans to do that? I think we need to make sure this one is successful, a lot of teams from around the world play in the United States and could use a place and a boot camp to acclimate to the time zone before the tournament.”

As of right, there is only one GeForce eSports Studio, which is located at their headquarters in California, now of course I’m hoping we can get a studio like that in New York. Nvidia continues to support the growth of the eSports community, and this studio I feel is just a taste of what’s to come from the company.