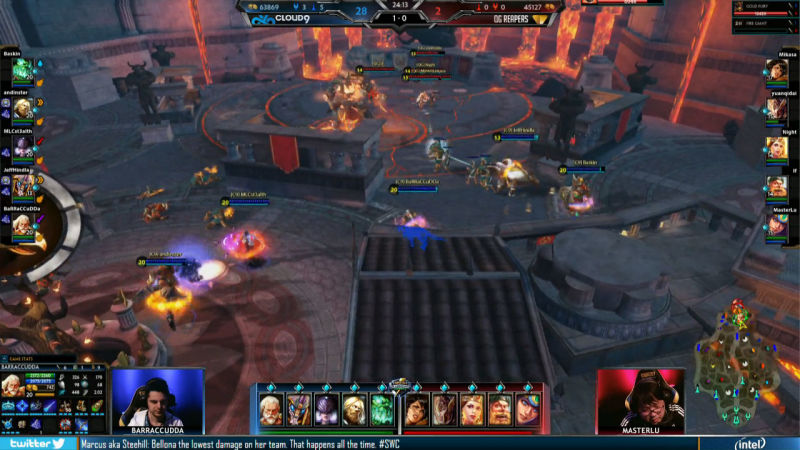 Day two of the SMITE World Championship had some close matches. Eight teams remain in the quarterfinals and a step closer to find out who will be crowned the 2016 SMITE World Champion. This is when we will see teams getting a little more aggressive making for intense matches. Teams battle it out in a best of 3. If you missed any of the matches, we have a recap of what went down yesterday.

Paradigm has been my favorite to watch this season – when engaging in team battles Paradigm always puts on a show that has fans on the edge of their seats. So when the match against Paradigm and OMG took to the stage – I was hoping to see some intense team battles. OMG secured first blood, but the two teams played an intense match. Even though OMG put up a good fight, after Paradigm secured a triple kill – you could see at that point that OMG had no more fight left in them – in which a surrender vote was taking place. During the second game it seemed as if OMG regrouped and started to fight back – the team was getting solid kills, but Paradigm did what they do best, and reacted – Paradigm played aggressively and took the game.

This match wasn’t as exciting as the match between OMG and Paradigm. PainDeViande is the team’s captain of Enemy and was the reason why the team had an advantage against PaiN. Enemy was all over PaiN – to the point where the team didn’t even give PaiN a chance to advance in the game – giving Enemy the win and having them move on to the semi-finals.

It seemed as if QG Reapers didn’t stand a chance against Cloud9. The team started off with some aggressive gameplay – they constantly countered QG’s plays. But at one point Cloud9’s hunter got a head of himself and was taken out – I thought this punishment would give QG the push they need to play just as aggressive as Cloud9, but instead the team looked like they didn’t want to take any chances and played safe. Cloud9 saw the team struggling and took advantage as they fought QG at their base. After a team fight the game was over – and Cloud9 advances.

One of the better matches of the day – the two teams seemed to know each other’s moves making it an interesting match. Even though each team shut each other down in a couple of matches, Fnatic still managed to get an advance on the team – but that didn’t last too long. Even though Fnatic played with force, it won’t be enough for them to acquire the Gold Fury. The Gold Fury ended up in Epsilon hands, this gave the team a 5k gold lead, and with that lead it seemed to give the team the push they needed to get Fnatic angry. As the match went on, you could see the aggressive playstyle from Fnatic start to diminish – Epsilon secured first blood in the second game as well as securing the Fire Giant, at this point it looked like Fnatic had given up, allowing Epsilon to take the game.