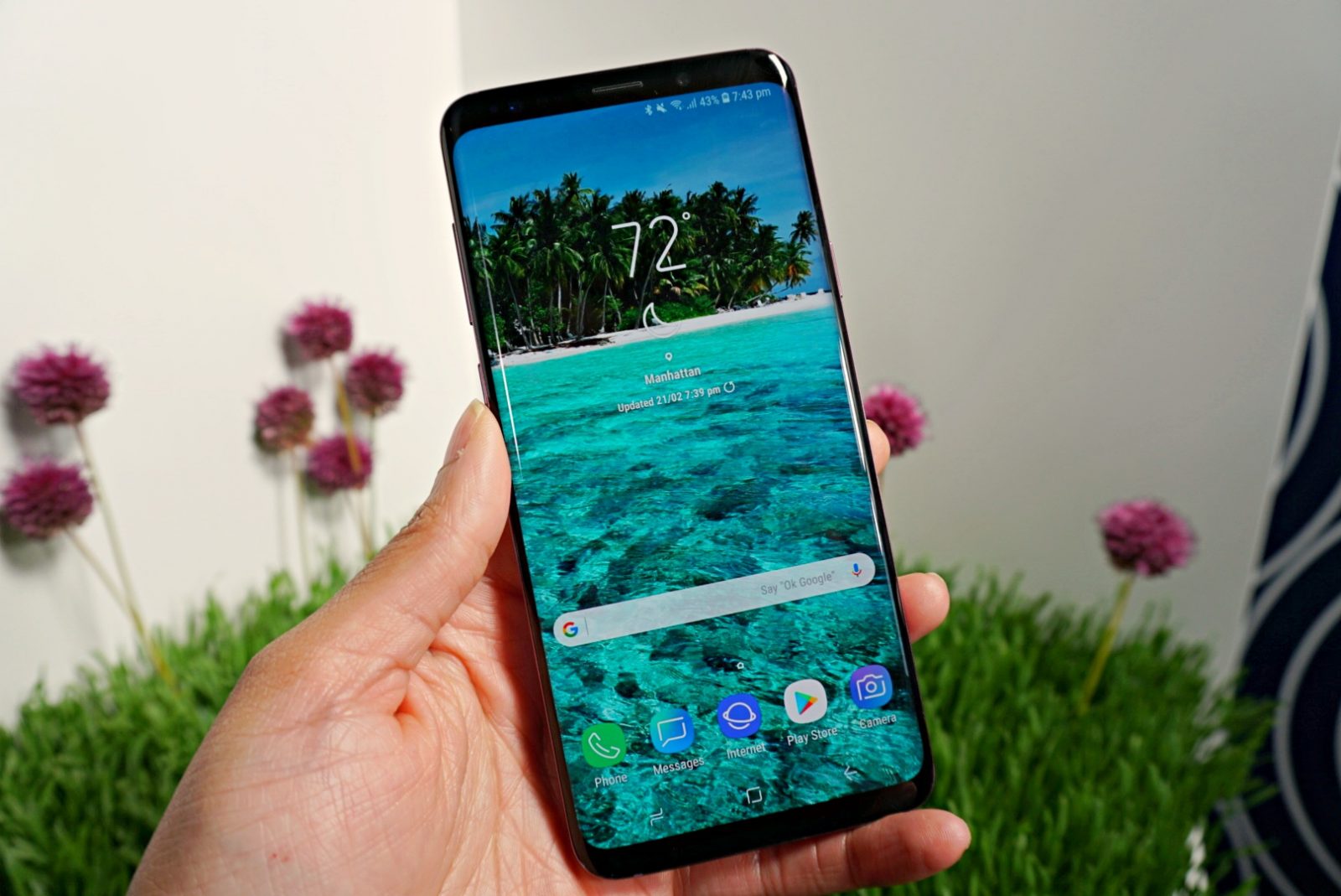 Facebook Twitter Pinterest Email
The Samsung Galaxy S9 and Galaxy S9+ have been officially announced at MWC 2018. Check out the specs, first look and hands on. #GalaxyS9 #MWC2018 --

Not that there is much left to announce after all of the leaks, but now that the Samsung Galaxy S9 and S9+ are official, lets get a look at the official specs and hands-on impressions of the phone. Check out the specs below. 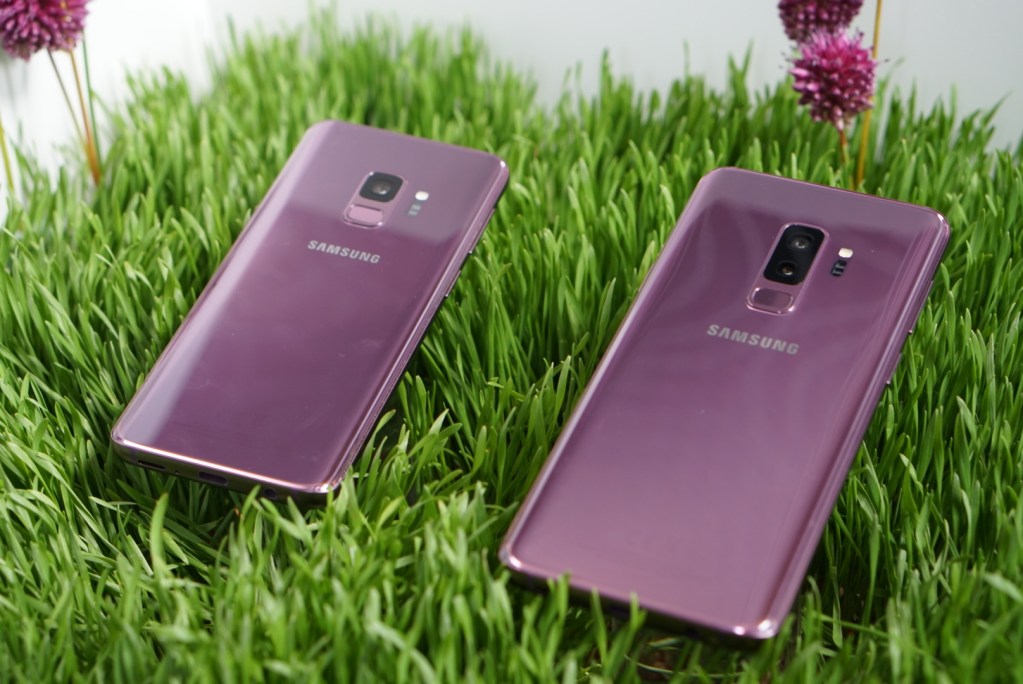 When first looking at the devices, they look similar to the Galaxy S8. You won’t be able to use the same cases as the S8 though. The Galaxy S9 and S9+ have edge to edge display, also known as Infinity Display. The S9+ has a bigger display and battery, as expected. It’s one of the first flagship devices to be rockin’ Qualcomm’s Snapdragon 845 chip. But there are more differences between the two. The S9+ has dual rear cameras as opposed to the S9’s single rear camera. The S9+ also has 6GB RAM, while the S9 has 4GB RAM. And it should be noted that Samsung has kept the headphone jack. The S9s have a little weight to them. They feel solid. You have the volume rocker and Bixby button on the left side of the phone. The right side has the power button. The top has the card slot. The USB-C charging port, headphone jack, and speaker are located on the bottom.

From the press release: Good lighting is the secret to any great photo. But often, photos are taken in less-than-ideal lighting conditions and most smartphone cameras have a fixed aperture that can’t adjust to low or bright lighting environments resulting in grainy or washed out pictures. Similar to the way the iris of a human eye expands and contracts, Samsung’s Dual Aperture (F1.5 – F2.4) automatically lets in more light when it’s dark and less light when it’s too bright, taking photos that are crisp and clear anytime, anywhere

The fingerprint scanner is no longer next to the camera like the S8. It is below the camera. It’s a lot better than next to the camera. We will see in time if it’s far enough from the camera. The S9 has intelligent scan, and it will confirm your identity the fastest way. If it can iris scan faster than it your fingerprint scans, it will unlock. After playing with the devices for a couple of hours, you can see Samsung is still focused on entertainment as well. It was fun to see the new AR emoji (Samsung’s version of Apple’s Animoji). I designed my own in a matter of minutes. It doesn’t look exactly my me, but it does a decent enough job. The camera takes solid pics in auto mode, obviously I didn’t get to test it thoroughly.

The stereo speakers on the S9 and S9+ do sound amazing. The speakers are tuned by AKG. Watching a few videos, the speakers were very loud, from a distance. 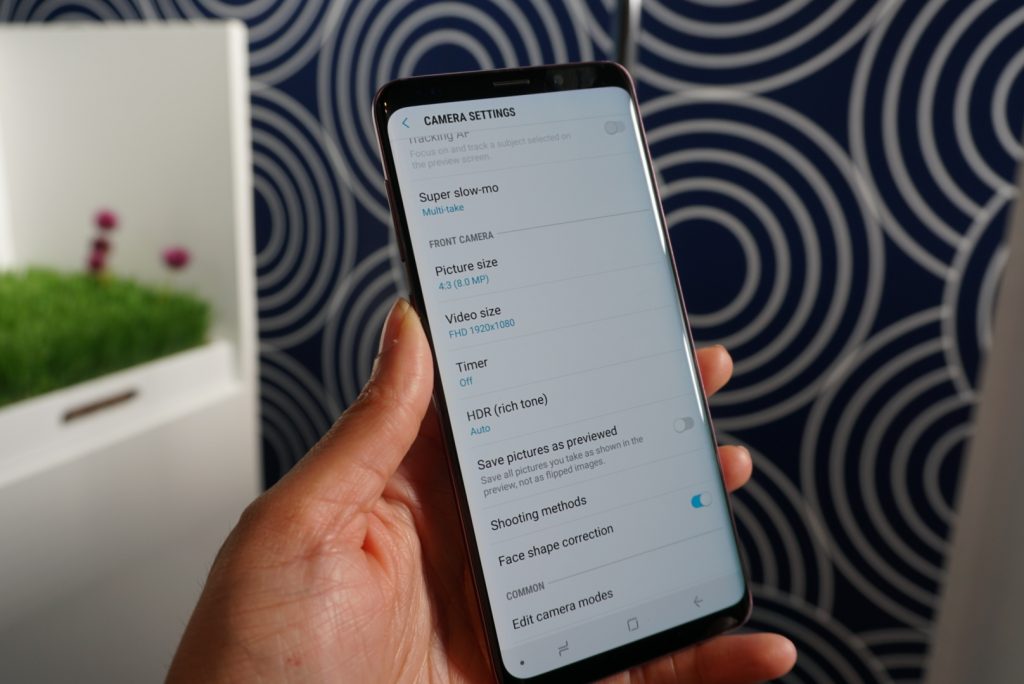 I also had the chance to try Samsung’s super slow-mo video. It detects the movements and does the recording on its own. Awesome party trick.
From the press release: The slow-motion video  captures 960 frames per second. The Galaxy S9 and Galaxy S9+ also offer automatic Motion Detection, an intelligent feature that detects movement in the frame and automatically begins to record – all users have to do is set up the shot. After capturing the Super Slow-mo video, users can select background music from 35 different options. 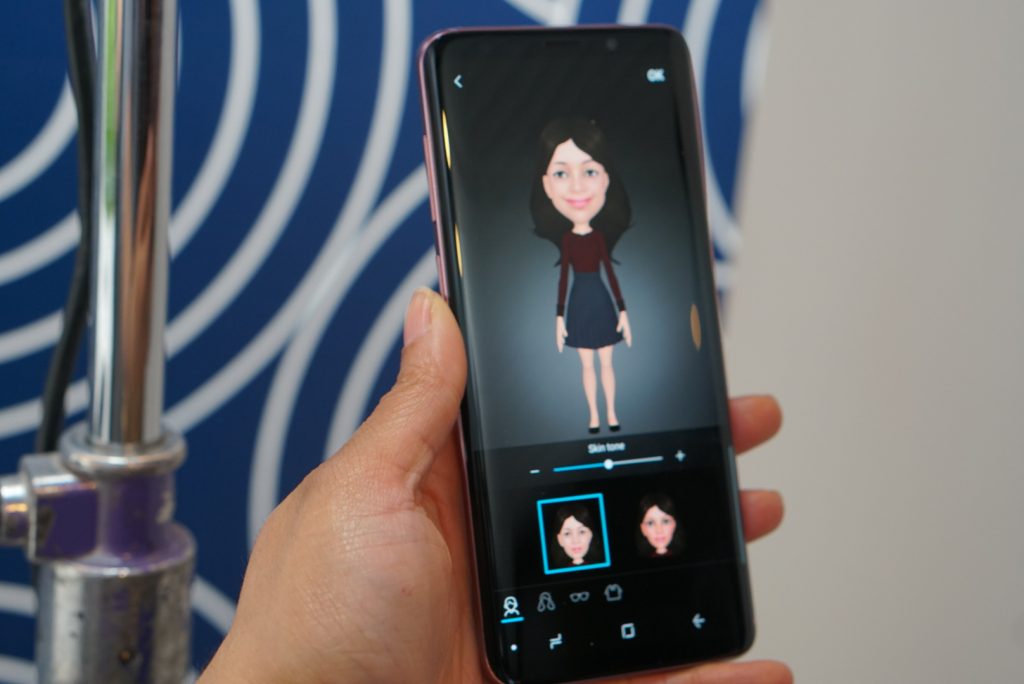 Yes, the Galaxy S9 and S9+ have Bixby integrated. It has been upgraded to work with augmented reality. Working in real-time, Bixby gives you information on what your camera is pointing at. You can also use Bixby to do “Live Translation”, which worked very fast during the demo. Translate signs in real time. A new category that has come to Bixby is food. If you activate Bixby while pointing at food with your camera, you will get an approximation of calories, nutrition, and it can even help log that information into the Samsung Health App. Virtual make-up with Bixby is also a thing. You can try on makeup and buy the products you like. So far, you can buy from Sephora and Covergirl. 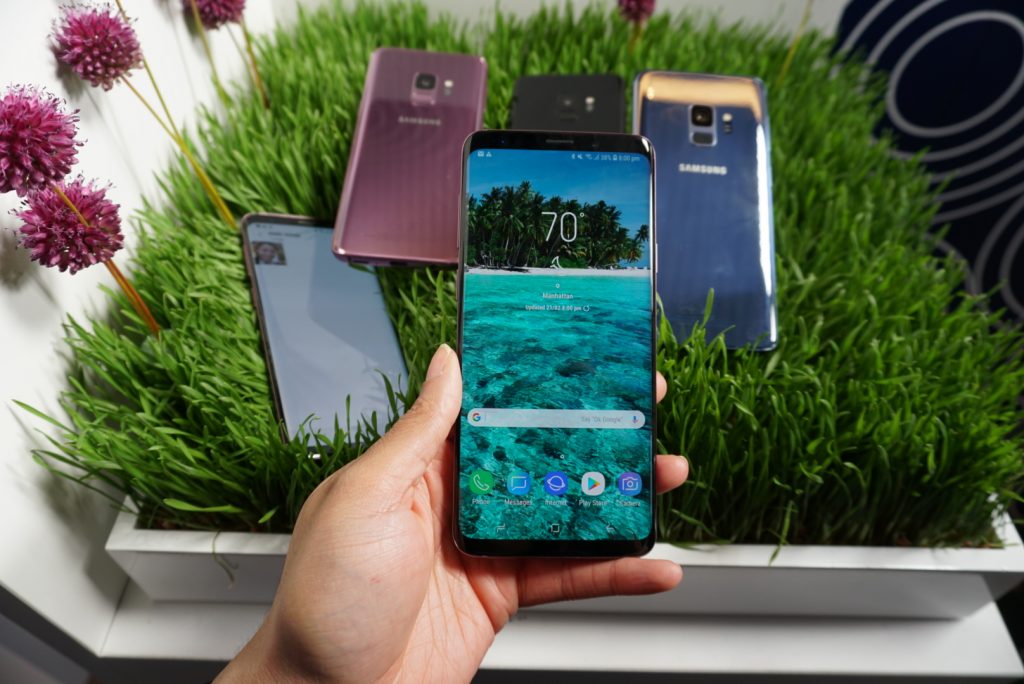 The Samsung Galaxy S9 and S9+ will be available in 3 colors, midnight black, coral blue, and lilac purple. It will be available for for pre-order on March 2nd from major carriers. It will be available in stores on March 16th. Staring March 2, 2018, consumers who pre-order a Samsung Galaxy S9 or Galaxy S9+ can save up to $350 with qualifying trade-in 6 . The Galaxy S9 will retail at $719, or $35/ month for 24th months, while the S9+ will be 839.99 or $35/ month for 24th months from Samsung.com . I assume carrier prices will be around that depending on the carrier. The promotion will last for a limited time and is available at Samsung.com, the Shop Samsung app and select retailers. Visit samsung.com/us/trade-in for more information. You can check out more detailed pricing and information on trade-ins and deals, HERE 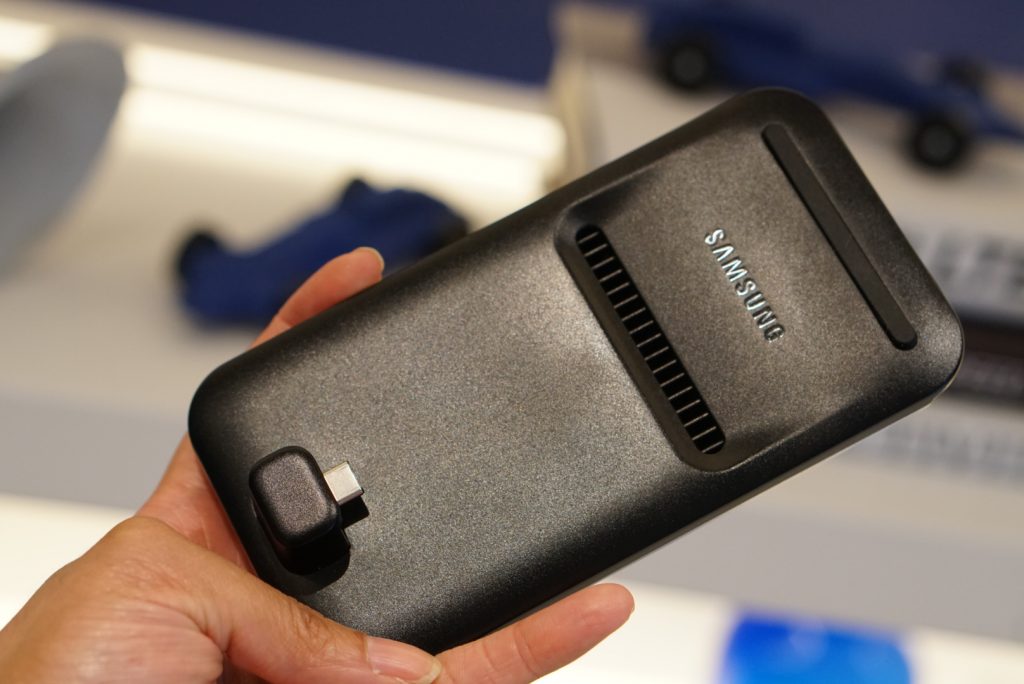 Samsung changed the form factor of their DeX dock. The DeX Pad docks the phone flat. It allows you to connect your phone to a screen, keyboard and mouse easily. It allows you to navigate using your phone as a touch screen, trackpad. You can drag and drop when adding attachments to email. You can use DeX Pad for fun, and take mobile gaming full-screen with the external monitor.

You can’t help but enjoy Samsung Galaxy S devices. They look stunning and have tons of features. Not sure if consumers are going to shell out over $900 for the S9+. It will be interesting to see what defining feature people will go for; more RAM, bigger screen, dual camera, or the smaller footprint worth sacrificing those features. Check out more pics in the slide show below