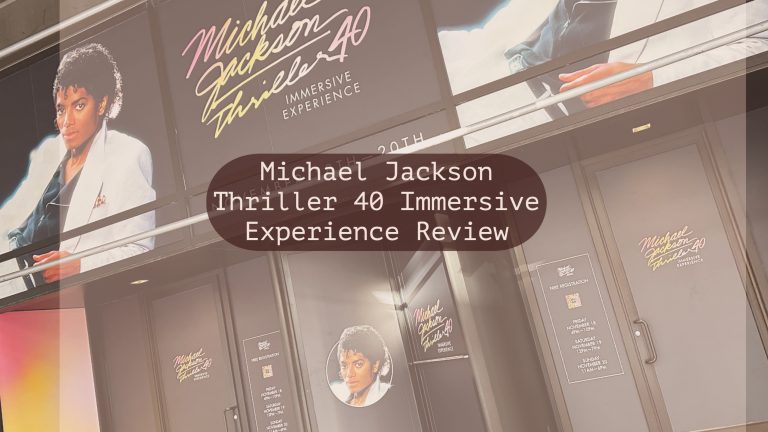 We attend many tech events. While they are mostly tech first, we enjoy it when they are interactive and for all to enjoy. This past weekend we went to the Michael Jackson Thriller 40 Immersive Experience in Manhattan, New York City.

The event space was branded from the outside, so if you were casually strolling down Fifth Avenue in New York City, you would have known something Michael Jackson and Thriller 40 related was going on.

At the check-in/exit area, you are treated to short films from the Thriller album and the track listing on the wall, written in a similar font to the original Thriller album. You walk into the first interaction, a setup similar to the Billie Jean music video. From the phone booths to the detectives to the stores. At one “storefront,” you can record a short dance clip similar to BillieJean. There’s even an interactive floor where the tiles light up as you step on them.

When you’re done with the Billie Jean, you go on to the next interaction, a mock little theater. You watch the Thriller short film on a big screen in 4K. It’s so fun to watch. When the dance portion of the short film starts, zombies come on the stage and dance along with it. The zombies walk around the audience after. Their makeup was very spot on.

We went upstairs to the second floor. it was an open space with lots of interactive areas. You can sit in a small room and listen to the Thriller album in 360 Reality Audio, or you can use Sony headphones to do it (it is Sony music). We’ve tested Sony’s 360 Reality Audio when reviewing some of their earbuds, so I was super excited to hear the album on the Sony WH-1000XM5 headphones.

The other booths on the floor were quicker and had more of a fun vibe. There was a zombie filter, a Pretty Young Thing (PYT) mirror, and a large screen that showed still shots from the Thriller short film and album cover. Just fun things to snap and share on social.

The last interaction was a mock “Beat It” short film set. It was the Billiards bar. It had pool tables, old-school arcades, and a tower of old television sets. Like the other sets, the theme song, in this case, “Beat It,” played on a loop. They had costumed dancers break out in the Beat It dance choreography, just like in the video.

The final stop was the merch shop. Everything from posters to tees to mugs and, of course, the Thriller 40 album in CD and Vinyl form.

It was such a fun experience. Unfortunately, it only ran for three days. It was free for those who managed to sign up via Eventbrite, which is pretty impressive. The Michael Jackson Estate will have more fan events for the 40th anniversary of the Thriller album in different cities. You can learn about more Thriller 40 events here.