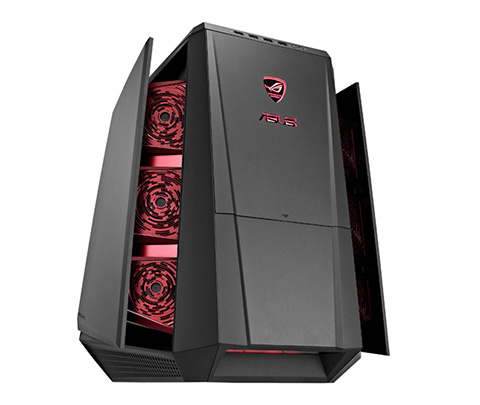 The audio quality is further enhanced by an ASUS Xonar DX sound card, providing 35 times clearer audio than onboard audio codecs, giving gamers an audio advantage over their opponents. On top of the aerodynamic polygonal exterior that features an intricately designed chassis that transforms when the system is overclocked, the additional DEFCON and bottom grill lighting indicator shows system readiness with blue and red LED lights. With its upgraded 10-way venting and liquid cooled CPU, the CG8890’s case is a cooling behemoth engineered to deliver the most efficient heat dissipation and airflow for incredible stability in any extreme condition.

Sweep your way through the battlefield with one-click Turbo Gear overclocking, which allows you to dynamically overclock the CG8890’s Intel Core i7-3960X processor with no need to reboot. With a single click, the CG8890 instantly overclocks its 6-core to three different modes, while the DEFCON indicator and bottom grill lighting shows system readiness with blue and red LED lights.

– ROG logo + bottom grill lights up blue, with the CPU overclocked to 3.8GHz

The GTX 690 is capable of producing fluid smooth gameplay at the highest gaming settings and has the power to support up to four monitors plus the option to game in NVIDIA 3D Vision Surround. The additional ASUS Xonar DX audio card powered by Dolby Home Theater technologies delivers 35 times cleaner audio quality (116dB SNR) than onboard audio codecs, giving gamers the edge by hearing their enemy way before the enemy sees them.

In order to achieve ultimate stability, the CG8890 is engineered to provide the best thermal solution in the thick of battle. The chassis automatically transforms and opens its top and side panels in Turbo Gear mode to reveal its robust crimson fans so as to exhaust hot air and redirect cool air into the system, thus extending the lifespan of components inside.

The additional intricately designed venting holes along the chassis also aid the overall cooling while the integrated liquid cooled CPU offers efficient and silent heat dissipation. With its advanced 10-way venting and integrated liquid cooling, the CG8890 is the perfect gaming desktop for marathon gaming sessions.