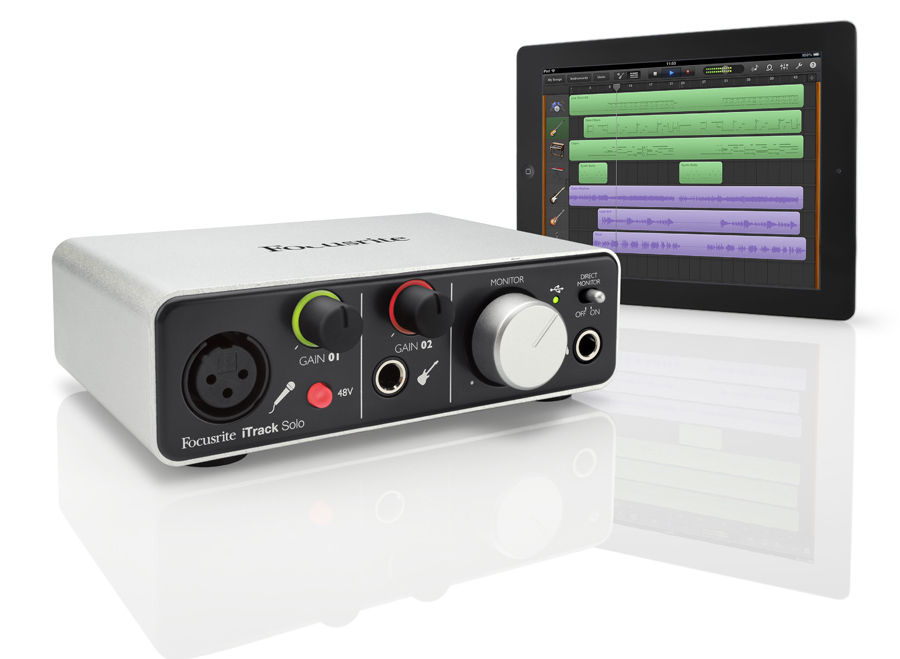 Focusriteʼs iTrack Solo is a dual-input audio interface designed for recording instruments and vocals, bringing Focusrite versatility and no-compromise sound quality to the world of iPad audio recording for the first time.

iTrack Solo is the perfect companion for any singer/songwriter wanting to take their demos to the next level – with audio quality thatʼs so good, they can be used in the final mix. The interface is compatible with Garage Band and other popular recording apps, and it can be used on a Mac or PC with up to 24-bit/96kHz digital performance.

Phantom power allows the use of top-quality studio microphones, and alongside the microphone input on the front panel thereʼs an instrument input thatʼs perfect for guitar and bass, along with the very best in digital conversion for the ultimate in quality.

With its rugged unibody aluminium chassis, itʼs perfect for recording guitar or keyboard and vocal on the go.

Owners of Focusriteʼs popular Scarlett 2i2 USB interface will find the layout and features quite familiar – in fact iTrack Solo is based on the proven technology found in Focusriteʼs existing range of computer audio interfaces.

Focusriteʼs signature “halo” indicators around the input knobs let you know if you are recording at the correct level (green) or at too high a level (red). Thereʼs a large monitor knob that controls the output level.

Monitoring can be switched to listen to your recording signal against your backing track without incurring off-putting latency introduced by your music software.

A supplied cable connects iTrack Solo to the iPad, powered by the included USB cable that delivers the power necessary to run the iTrackʼs high-specification components.

There is also a pair of phono connectors on the rear panel for connecting an audio system for playback. Compatible with Mac OS X and Windows Record with many apps including:

GarageBand – with up to 24-bit, 96kHz sampling Direct connections for microphone and instrument Plug electric, electroacoustic or bass guitar and microphone into the front panel to record in pristine quality

Aluminium unibody case Roadworthy protection for even the most adventurous musician.