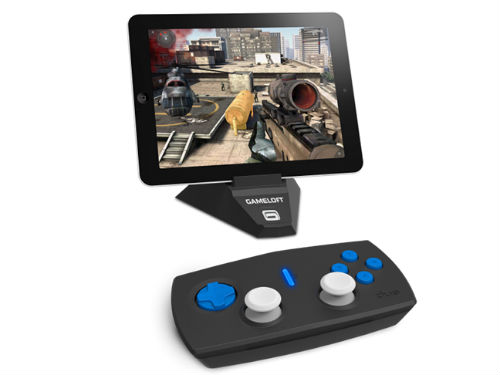 As you all know I’m not a big fan of gaming on my phone or tablet. I feel the controls are very close together and I just can’t get into it. I rather play on my PS Vita or Nintendo 3DS, but with the announcement me of the “Duo Gamer” I might give game playing on a tablet a try.

Gameloft is on one of the few to start this trend by creating iOS games that in many ways give next-gen console titles a run for there money. The one problem so far with playing games like N.O.V.A. 3 – Near Orbit Vanguard Alliance or Modern Combat 3: Fallen Nation is the control that has us control the game via virtual thumb sticks on the screen of their iPad. While it works, it’s not the best way to enjoy your gaming experience.

Controller options are already available for Android devices, in typical Apple fashion, it’s taken awhile to have one available for iOS devices.

Designed to work with the iPad, iPhone and iPod touch, the Duo Gamer has dual analog thumb-sticks, six buttons, a D-pad and connects with your iOS device via Bluetooth. Shipping with two AA batteries, as soon I as turned on the Duo Gamer, then turned on the iPad’s Bluetooth, the two devices were immediately linked to each other.

Since N.O.V.A. 3 – Near Orbit Vanguard Alliance is the Gameloft title we’re most familiar with we decided to start off with that title. The game detected the controller immediately and playing instantly became more enjoyable.

Duo Gamer turns your iOS device into a full-fledged gaming console, we connected our iPad to an HDTV via HDMI and actually played N.O.V.A. 3 from the comfort of a couch 10-feet away.

Gameloft and Duo Games the Duo Gamer is designed to work with several Gameloft titles including Asphalt 7: Heat, Modern Combat 3: Fallen Nation, Order & Chaos Online, Brothers in Arms 2: Global Front, and N.O.V.A. 3 – Near Orbit Vanguard Alliance. That said, during our testing we were only able to get it to work with N.O.V.A. 3 and Asphalt 7: Heat. We imagine that this will change as more users report issues with certain titles and updates are issued.

I really enjoy using the Duo Gamer it felt like I was using an Xbox controller. Wouldn’t mind throwing this in along with all my other portable gaming systems.