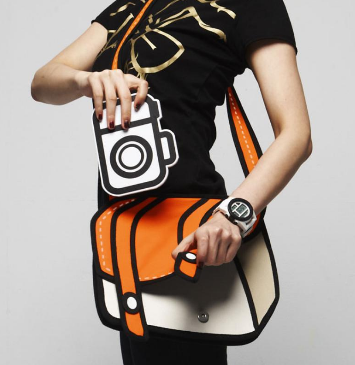 Without a doubt, in the last couple of years being a geek has gotten more glamorous.  Some of us still get stuck with the stigmas, like the necessary glasses, but with a sway in focus for consumers designers have recognized it’s ok to be a nerd. This change has led to a number of innovations in what gadgets/nerd gear looks like. Here are a few of my favorite Glam Gadgets. We have evolved from the use of large take-over-my-space boom boxes to more stylish functional speakers like Jawbone’s Jambox. Thanks to Rebecca Minkoff listening to music has gotten super functional and fly with these Bluetooth clutches that are not really clutches at all.

Each clutch cost around $400 which is somewhat on the higher end for portable speakers, but you’re also paying for the Rebecca Minkoff “Glam Factor.” How dope would it be to just “whip out” the speakers at a house party, they will be wowed at your clutch and your gadget AT THE SAME TIME! The days of long twisted tangled cords are on their way out with this innovative solution to charging. Last year ChargeCard, fresh from a Kickstarter, launched worldwide to a ton of acclaim for the simplistic charging solution.

Roughly the size of a credit card and a mere 2.5mm thick, ChargeCard has 3 different option for iPhone 5, iPhone 4/4S, and MicroUSB for Android devices. Shown in the picture above, it serves as a bendable “arm” where you connect one end to your PC and the other end to your phone Voila it’s Magic. Priced at $25 I think it’s a steal considering the normal Apple chargers are a few bucks cheaper than this. Personally, I like the idea of not having to cart around a cord everywhere, or the idea that it will slip in my wallet and can be out of sight! Your eyes are not deceiving you, this is a 2D bag. A while back I discovered the Jump from Paper bags and still feel like it’s a must have for every nerd. They are a definite ice breaker, statement piece, “come talk to me about it” bag! The cartoon like outline and bold colors creates a fresh style that is widely different than anything out right now. Which gadget is glam enough to be in your closet?