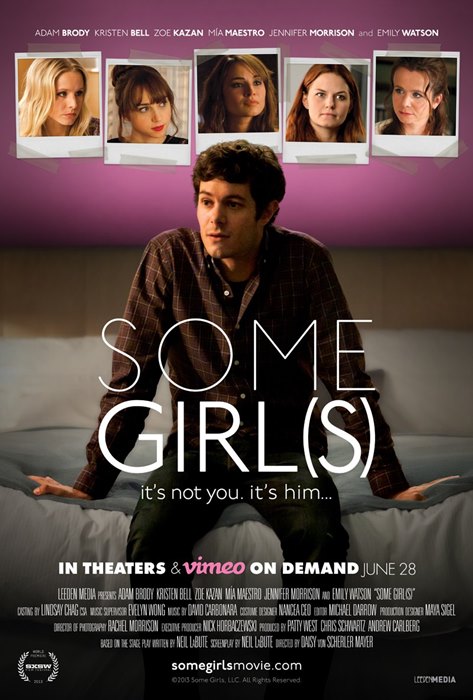 Facebook Twitter Pinterest Email
ow it's movies going straight to video streaming services. The movie Some Girl(s) is the first movie to do that. This isn't a movie that was released before and is now coming to the service. It is being released directly to the service alongside selected movie theaters. It premiers today!

Tech is taking a turn for the personal. A good turn that is. Tech is coming directly to the consumer. We recently discussed music albums launching straight on smartphones, like Jay Z’s Magna Carta. Now it’s movies going straight to video streaming services. The movie Some Girl(s) is the first movie to do that. This isn’t a movie that was released before and is now coming to the service. It is being released directly to the service alongside selected movie theaters. It premiers today! You can stream it for $5 or own it for $10.

What do you think this will do for future releases? Will movie tickets sales go down for the comfort of the home?

Today, SOME GIRL(S), starring Kristen Bell, Adam Brody, Jennifer Morrison, Mia Maestro and Emily Watson, made its global day-and-date debut exclusively on Vimeo On Demand (vimeo.com/ondemand/somegirls) and in select theaters in New York and Los Angeles. Turning down offers for traditional distribution, Leeden Media, the film’s producer, is taking SOME GIRL(S) global just months after its initial premiere at SXSW 2013.

SOME GIRL(S)’ path to viewers through Vimeo On Demand is a highly-visible milestone in the growing direct‑to-consumer distribution movement, as Hollywood and independent creators alike look to bring films to market with greater speed and flexibility. The film also represents an important benchmark for Vimeo – just three months since the March 2013 launch of Vimeo on Demand, the service now offers over 1,400 films, and the broader Vimeo network now reaches a global audience of over 100MM unique users per month.
“We’re very excited to partner with the SOME GIRL(S) team for the day-and-date release of this innovative film,” said Vimeo’s CEO, Kerry Trainor. “Leeden Media’s decision to release the film direct to fans on Vimeo On Demand is a great example of how the web empowers creators of all levels to reach audiences worldwide and maintain control over how their content is sold.”
“What we’re doing with SOME GIRL(S) right now could not have been possible if we opted for traditional distribution for the film,” said producer, Patty West, partner at Leeden Media. “When we premiered the film at SXSW 2013, we heard about Vimeo On Demand – which debuted at the same time – and were immediately drawn to what it had to offer, specifically the full control it grants and the attractive 90/10 revenue split that all creators are presented with. More importantly, by shifting gears and going with Vimeo On Demand for a day-and-date release, we’re able to bring the film direct to fans worldwide on the same day – ensuring no one has to wait – and in just a few months rather than the year that’s typically the average following a festival premiere.”
Based on his play by the same name, Neil LaBute’s script follows a successful writer (Adam Brody) who, on the eve of his wedding, travels across the country to meet up with ex-lovers in an attempt to make amends for past relationship transgressions. Crisscrossing from Seattle to Boston, he reunites with high school sweetheart Sam (Jennifer Morrison), sexually free-spirited Tyler (Mia Maestro), married college professor Lindsay (Emily Watson), his best friend’s little sister Reggie (Zoe Kazan), and “the one that got away” Bobbi (Kristen Bell). Daisy von Scherler Mayer (PARTY GIRL) directs this journey of a modern-day Candide stumbling through a landscape familiar to most men—messy breakups.

SOME GIRL(S) is available now at (vimeo.com/ondemand/somegirls) and will cost $5 to stream (rent) and $10 to download (own) with bonus behind-the-scenes footage.

For more information regarding Vimeo On Demand, please visit https://vimeo.com/ondemand

About Vimeo
Vimeo® is the high-quality video platform for creators and their audiences. Vimeo’s mission is to empower and inspire people around the world to create, share and discover videos. Vimeo has over 18M registered members and reaches a global audience of more than 100M each month. Founded in 2004 and based in New York City, Vimeo, LLC is a subsidiary of IAC (NASDAQ: IACI)