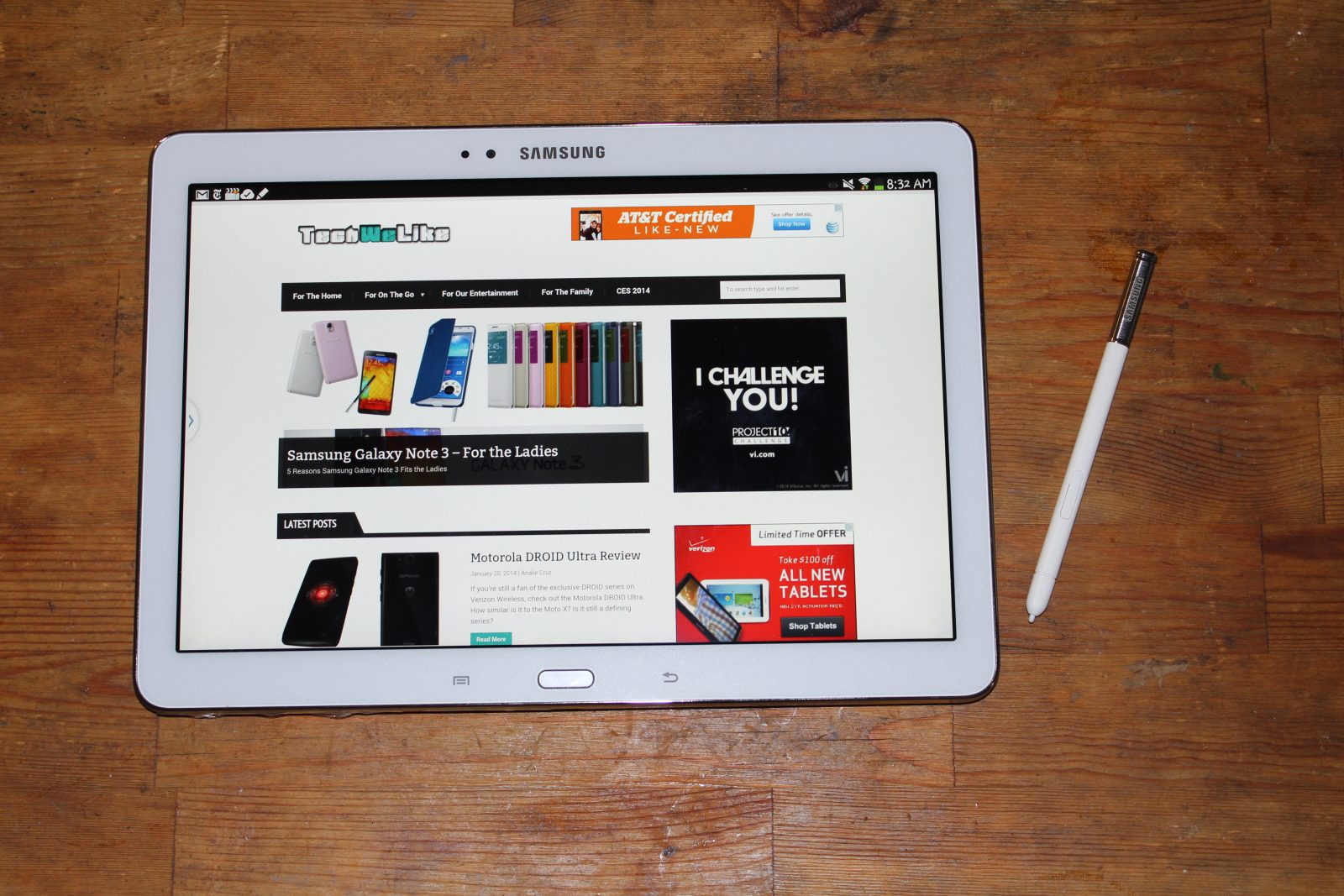 I came to use the Samsung Galaxy Note 10 – 2014 Edition with some experience. It has been a while since I got the original Galaxy Note 10.1, so I was excited to see some of the changes that were to come.

Samsung had quite some time to get a lot of feedback on their original note device and I’m sure that the used it and applied it. Launching this tablet in late 2013 alongside the new Galaxy Note 3 and the Samsung Galaxy gear the Galaxy Note 10.1 2014 edition was already ahead of its time. If you know me, you already know that I do love the S Pen. The Galaxy Note 3 is one of my main devices and before that the Note 2 was my previous device because I actually use a stylus. It’s good to have somewhat of a big screen without the screen being too large. I figure if you’re considering the Galaxy Note 10.1, you’re obviously (or should be) distinguishing it with the S Pen. One thinks how can you go wrong with high specs and such a responsible S Pen. Samsung must of heard the complaints about the plastic design, so just like the Galaxy Note 3 the Galaxy Note 10.1 2014 edition as the fake looking leather plastic. While it still is plastic, it is much better looking and much better feeling than the previous glossy plastic on the 2012  10.1 tablet and gives the tablet a more premium feel. It also prevents fingerprints from being visible.

The bezzles on the new Galaxy Note 10.1 are way smaller than previous models. It’s reduced drastically in size, making it easier to handle. The speakers are no longer on the front, they’re on the borders of the tablet.

The tablet has a more simplistic look with only  the physical home button and the capacitive touch back button and menu buttons on the bottom of the face. The only other physical buttons that are found are alongside the top border, which  the power / standby button and the volume rocker. I wish there was a better way to distinguish between the standby button and volume rocker, or that they were just a bit more spaced out. A little bit farther down the top border you have the IR blaster. The borders have a metallic lining similar to the Galaxy Note 3, which has ridges to make it look like a notebook. At the bottom of the tablet you have a micro USB port for charging.  This would actually have been the right time to  use a USB 3.0 port, but at least they don’t have that other charger 30 pinpoint which was just annoying. Micro USB feels familiar and I’m fine with that. When first beginning to use the tablet the first thing I immediately noticed is the beautiful screen! Not to get too technical but to give you an idea the previous model how to 1280 x 800 display the 2014 10.1 tablet has a 2560 x 1600 LCD display. I didn’t know how much I really did love the clear and crisp display until now. It’s just beautiful to look at. The viewing angles are great, no complaints about that here. It’s great for watching movies and listening to music. I ended carrying the tablet around more because it was so lightweight (it weighs about 1.2 pounds). Just like the Galaxy Note 8.0, the menu and back buttons work with the stylus. The previous Galaxy Note 10.1 versions did not have that support. Another little change that makes a huge difference. It was annoying to have the S-Pen out, then have to use your hands to navigate the buttons.

S Pen for the Win

As I let you know earlier, the S Pen is the reason that I mainly use the Galaxy Note 3 as one of my daily drivers, and it should be one of the deciding factors when buying this tablet. It’s basically the standout feature that differentiates the Galaxy Note 10.1 from other 10 inch tablets. The S Pen feature goes from good to great on a 10 inch. Handwriting on a 10 inch tablet feels natural. You can switch the keyboard to the open “handwriting” space, and it actually reads it quite clearly. But it doesn’t stay in the setting permanently. Every time you switch to a new text box you have to change the setting again. Hopefully they can add the option later on. You can also put a very tiny keyboard that is split. It’s easy when you’re handling the tablet with two hands and won’t have to reach. Having used the Galaxy Note 2, the original Note 10.1, and now the Galaxy Note 3, I have somewhat grown with the S Pen, so I have an idea how to work it to get the most out of it. Others however will have to learn proper angling of the S Pen to make sure that it reads correctly.

Multi-Window Goes To the Next Level

Another one of my favorite features is the multi-window feature. Samsung took it to the next level allowing you to open the same app twice, side by side. A great addition to the feature is that you can save a pair of apps to open together.

The battery life is great on the tablet. The 8,220 mAh battery (bigger than the last version) will get you through the day and then some time to spare, with moderate use of course. Standby time is pretty good as well.

I like that Samsung is definitely listening to what consumers are saying. The Galaxy Note line is their premium line of devices, and they are finally starting to look the part. I like that they tried with the leather looking plastic and the stitching. Sometimes that little lag for the screen to turn on can get a bit annoying, you expect a smoother performance overall. Sometimes it takes a bit too long (given the specs). The only reason I notice is because I can compare to other tablets side by side. I doubt some will be able to tell unless they have another tablet side by side. It won’t digitize your entire life, but I feel that a stylus with a 10 inch tablet gives it more versatility. The price is a bit steep. Hopefully there’s a price drop soon. Comparing to the iPad Air’s starting price of $499, the Galaxy Note 10.1 2014 edition is already higher priced. But the features might be a deal breaker for some.

For the most part, Samsung has it right. They are getting it. Better display, better design and useful S-Pen features. Performance is good, but it could be a bit better (especially with those specs).  Hopefully in the future, TouchWiz won’t take so much power from the processor in and the speed will be what’s expected. I like where this is going. Since I have the Note 3, it makes no sense in me carrying a seven inch tablet around, so I usually carry the Note 10.1. I’m just glad that when switching screen sizes I don’t have to give up the S Pen. Overall, Samsung gets it now, simplicity and elegance bring this tablet one step closer.

The Samsung Galaxy Note 10.1 2014 Edition tablet will run you $550 (and up). You can find out more about the tablet and purchase it in the link below: