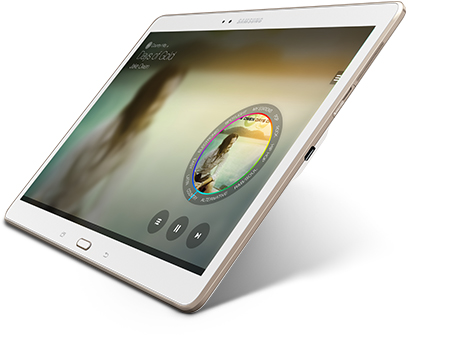 I’ve been pretty attached to my iPad 3 since I bought it to the point that I didn’t really give any other tablet a try. When I was sent the Samsung Galaxy Tab S for review I wasn’t convinced it could take the place of my iPad. From the moment I turned on the screen I noticed a huge difference, but would it ultimately change my mind?

The tablet I was sent to review is dazzling white and the perimeter is trimmed in gold. When I first took it out of the box the first thing I noticed is how thin it is. The Galaxy Tab S is the thinnest Samsung tablet to date at 0.26” thick and 1.03 lbs. The screen size is 10.5”, which is a little larger than the average 10” tablet, but because it’s so lightweight and thin it doesn’t feel much larger.

Also around the perimeter you will find dual speakers, one on each side. There is also an option to set the speakers to surround sound. Along the side, you will also find the headphone jack, micro-USB port and micro SD slot. On the top, you will find the power/lock button, volume rocker and IR blaster that you can use in place of your TV remote. On the front of the tablet along the bottom you have the exact same buttons as most Samsung mobile devices, the home, back and recent apps buttons. The top of the front is the 2.1MP front facing camera as well as the proximity and gesture sensors.

The back cover is plastic, but it’s dimpled and doesn’t feel flimsy. You will find the 8MP rear facing camera and LED flash. Both are also trimmed in gold. You will also find circular snaps that are used to attach the tablet securely to the Samsung Book Cover (sold separately), which you can pick up for $48.99. The Samsung Galaxy Tab S is packed with features. If you’re not familiar with Android or used to a more low-end device it can seem a bit overwhelming. After some time with it you’ll get the hang of it.

If I had to pick a favorite feature it would be Multi-window. It’s perfect for multitasking, which I do a lot of. The Samsung Galaxy Tab S is still running on 4.4.2 Kit Kat and there is no word on when it will be upgraded to Lollipop. Not really a deal breaker

I’ve actually been using the Tab S for the last few weeks instead of my iPad. The screen resolution alone is enough to fall in love with it. The iPad Air 2 resolution is 2048×1536 pixel, but the Super AMOLED® display on the Tab S is 2560 x 1600 Pixels making it twice the resolution of your average HDTV. There is an obvious difference especially if you use your tablet to read and watch movies often like I do. The one complaint I have about the tablet is the fingerprint scanner. You can register up to 3 different fingerprints, which means is you use Multi User Mode two other people can register their fingerprints. I had an issue registering more than one and the one that was successful wasn’t able to unlock the tablet at least 30% of the time. Luckily, you can use a password as an alternative to unlock it.

Battery life is amazing. I only had to charge every couple of days and I watch TV shows and at least one movie per day. The storage on the tablet is 16GB and although it is expandable with micro SD cards. With a price tag of $429.99 on Amazon, you would expect a bit more internal storage space. You also have the option of purchasing the 8.4” version for $329.