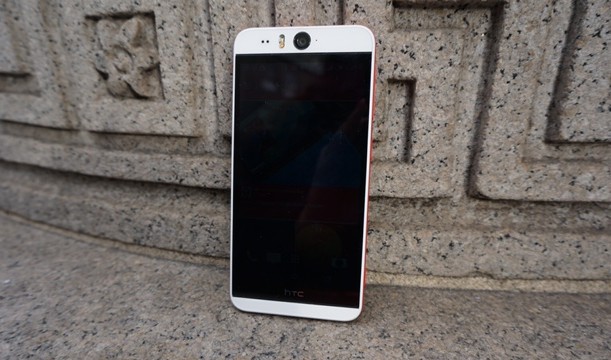 Facebook Twitter Pinterest Email
The HTC Desire Eye takes pride in having a great front-facing camera. Is it just a selfie phone or is it a full package?

When I first heard of the HTC Desire EYE I thought it was going to be the same thing as the HTC One M8 with a flash and a dedicated camera button. After some time with the phone here’s what I thought of it.

As you can see from the specs, the HTC Desire Eye isn’t the most powerful phone on the market, but it isn’t all the way midrange either. What really sticks out is the cameras. The Desire Eye has a 13 megapixel camera in the back and the front. HTC has been focusing on the front facing camera, so this wasn’t a big surprise. I am all for selfies so I was hype about the camera.

Check out our review of the HTC Re Camera

The HTC Desire Eye is plastic. The phone is white with a red stripe going around the border. I fidn the design rather playful and cute. On the right border you have the volume rocker, power / standbuy button in the middle and the camera button at the bottom. The left border has the micro sim card slot and memory card slot slot. The front panel has a 13 megapixel camera with flash above the 5.2 inch screen. Between the camera and the screen sit the boom sound speakers.

The overall experience of HTC Sense isn’t overbearing on the Android operating system. The screen is full HD IPS and is nice and easy to look at. It does well outside during the sunny days. While the Desire Eye has BoomSound speakers, they are not as powerful as those on the HTC One M8. But they are more powerful than most of the phones out there. So the overall entertainment experience (watching videos and netfilx) is more than decent. The Desire Eye has a rather large screen but it’s doesn’t look as big (maybe because my main phones are phablets, so the Desire Eye is actually smaller than what I’m used to). The phone has a really squared feel to it, so it doesn’t curve into your palm. It feels light yet sturdy, but the plastic makes for a slippery grip, especially with the straight back cover. But overall the Desire Eye is a good size in comparison to the phablets and the smaller phones out there. A bit on the larger side but not too large.

The main differentiation between the Desire Eye and other phones is the 13 megapixel camera on the front of the phone. Not only does it have a front facing camera with a lot of megapixels, it has a flash as well.

I enjoy taking selfies so I know what the usual “struggles” are with them and was looking forward to testing out the selfie pictures. I am just happy that there’s no UltraPixels. But that didn’t make too much of a difference. The pictures taken with the rear camera on the Desire Eye are good but not great. They get the job done but you need good lighting or else the flash will whiten out the colors. I suggest always using HDR to get crisp pictures.

The front facing camera was great to take pictures with. It has a wider lens than the rear camera to fit more people or more background in. HTC had a wide angled lens on the M8 also. With the extra space you have enough room to fit and not have to squeez (causing that unsightly double-chin). The selfies are a lot brighter than nearly all the other cameras out there. It doesn’t mean the colors are always right though. When you first start taking selfies with the Desire Eye you’re pleasantly surprised with the brightness and saturation of the pictures since you’re not really used to them on other front facing cameras. But the front facing camera just like the rear camera takes good pictures, not great pictures (that’s if you want to nitpick at saturation and color representation). The flash is great at night

The pictures with obvious distance, I used the Desire Eye with a selfie stick. The front facing camera has face detection and has the beautifying feature. If you use the beauty feature too much, your face looks like a big blur. It also doesn’t work well when there’s more than one person in the picture. Otherwise it gets the job (of taking selfies) done really well. You get a clear view of the subject and the background. The dedicated camera / shutter buttons helps a lot. Since it’s at the edge it doesn’t matter which way you’re holding the phone (vertically or horizontally) you can have a comfortable grip and shoot the pic. You won’t have to reach to the screen to shutter.

Even while snapping selfies all day, the battery life of the Desire Eye was long lasting. I got up to 8 hours with active use and moderate brightness. For those who really use up battery life, the Desire Eye  has an “Extreme Power Saving Mode” to get the most out of  your remaining battery power. The Desire EYE is only available on AT&T (in the United States). AT&T is speedy for the most part. I rarely have problems with service. I even get great service in the subway. Score! I enjoyed the phone for what it’s worth. I was hoping that since the cameras are the major attraction they’d be a little better. But it definitely gets the job of the selfie done (the flash comes in especially useful for night time and party selfies). I think it’s a bit overpriced especially in comparison to HTC flagships. I do expect the price to drop. I’d recommend this for the extreme selfie and social media lover. Always out and about and sharing moments.