Logitech is known for constantly upgrading and giving players a variety of PC gaming accessories. The company started their G Pro Gaming line with the, Pro Gaming Mouse, which I tried and loved. Now I’m not an eSports player, but I do play ranked in some games and having that upper hand is always a must. With the success of the Pro Gaming Mouse, the company decided to add to the line.

The Logitech G Pro Gaming Keyboard is the newest edition to the Pro line. The Mechanical Keyboard is smaller than the rest of the company’s gaming keyboards and is missing the number pad as well as the media function keys.

But with some of the small changes to the G Pro what players really want to know is, will the G Pro still have the performance and durability that players have come to love and trust when it comes Logitech G products? 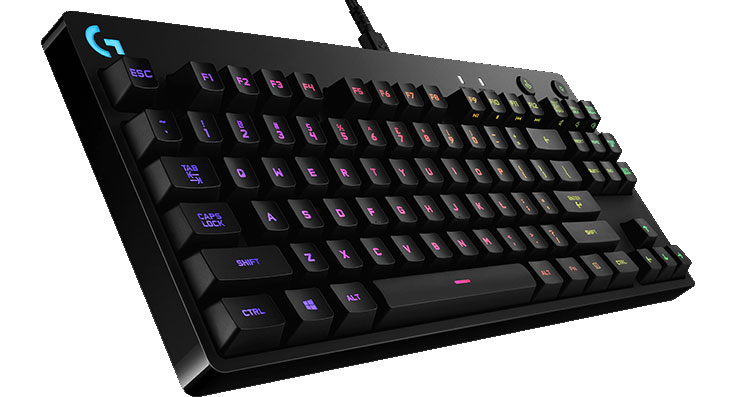 The first thing you will notice is the difference in size in comparison to the company’s other gaming keyboards. The G Pro looks like a mini G810 (one of my favorite keyboards), with its sleek design and RGB lighting.

Besides the lack of number pad making the keyboard being smaller, you will also notice a lighting key and another key that has a logo that looks like the classic atari controller.

If the G Pro will be your first time owning a LogitechG keyboard, let me give you some background on what the Romer-G really is.

The Romer-G switches are Logitech’s mechanical switches, these switches operate at a distance of 1.5mm. What does that mean? It means you will have a 25% faster reaction time – than your competitor. The Pro G comes with the Romer-G mechanical switches, they are something similar to Cherry keys, but faster, more responsive and can stand up to long time abuse. I will say, after reviewing a couple of different gaming keyboards, the Romer-G keys are very comfortable – especially when you have long gaming sessions. 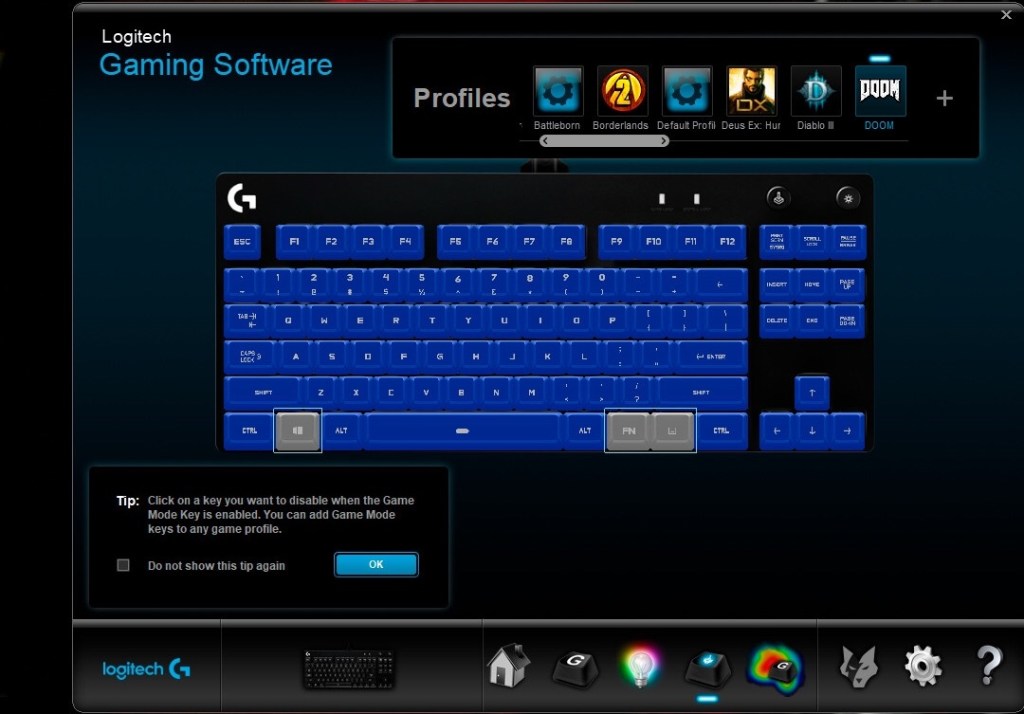 With the Pro Gaming Keyboard, you can customize your keys however you want, you can also disable any key you like, in Game Mode – using the Logitech Gaming Software. If you’re like me, who ends up hitting buttons that you are not supposed during a match, disabling buttons becomes a lifesaver. The Pro Keyboard doesn’t have set media controls, like the G810, instead you can use the Fn key then use the top row of Function buttons to control your media.

Just like any other Logitech G product, you have the Logitech Gaming Software; this allows you to custom program your macros buttons, F1-F12. You also have over 300 built-in profiles for different games, such as; Counter-Strike: Global Offensive, League of Legends, OverWatch and much more. The software allows you to store your customizations and lighting profile so you can use your custom settings anywhere.

Overwolf is also accessible via LGS (Logitech Gaming Software). Overwolf adds apps to the PC games you play, with over 300 apps to help you take your gaming experience to the next level. Overwolf, also allows you to run exclusive apps such as Replay HUD, LoLWiz, HearthArena, CS: GO stats, and the TeamSpeak overlay solution.

While testing the G Pro, I used eSport and non-eSport games. Since the Pro is more focused on eSports, I decided to test games such as SMITE, Paladins, Rainbow Six Siege, and CS:GO. With each game I setup my profile during my matches and had no issues with response time

I played each game for about an hour, and even though I may not be the best player when it come to Rainbow Six and CS:GO, my accuracy and response time was quicker than my teammates (they use a different keyboard brand). While playing Guild Wars 2 and The Elders Scrolls Online, I got the same responsive and accuracy as I did when I was playing those eSports titles.

While traveling, I did bring my G Pro along for the trip. After going through the airport – where they like to fling my bags around. Once I got to my destination I pulled out my G Pro and we played Paladins. Thanks to the steel backplate, my keyboard was unfazed by the travel, button keys worked perfect, no performance issues, no dents or damage.

The Logitech G Pro Gaming Keyboard is a smaller size than the Logitech G810 Orion, you don’t have the designated media controls, or the number keypad but, you still have that Logitech G quality and outstanding performance.

The size is perfect for Pro players, as it’s easy to throw in a bag, or even carry around with you. You now have more space for your gaming mouse as the keyboard is smaller than the G810, and it’s the perfect size. If you are cramped for space you can actually place the keyboard on your lap or have your mouse on the table and play without any issues. Since the Logitech G810 Orion came out, it’s been my favorite gaming keyboard. I have tried others, but always went right back to it. Now the Logitech G Pro Gaming Keyboard has replaced my G810.

If you are in the market for a mechanical keyboard, that you can travel with to tournaments without having to compromise performance, comfort and durability – the Logitech G Pro is the gaming keyboard you should add to your PC arsenal.