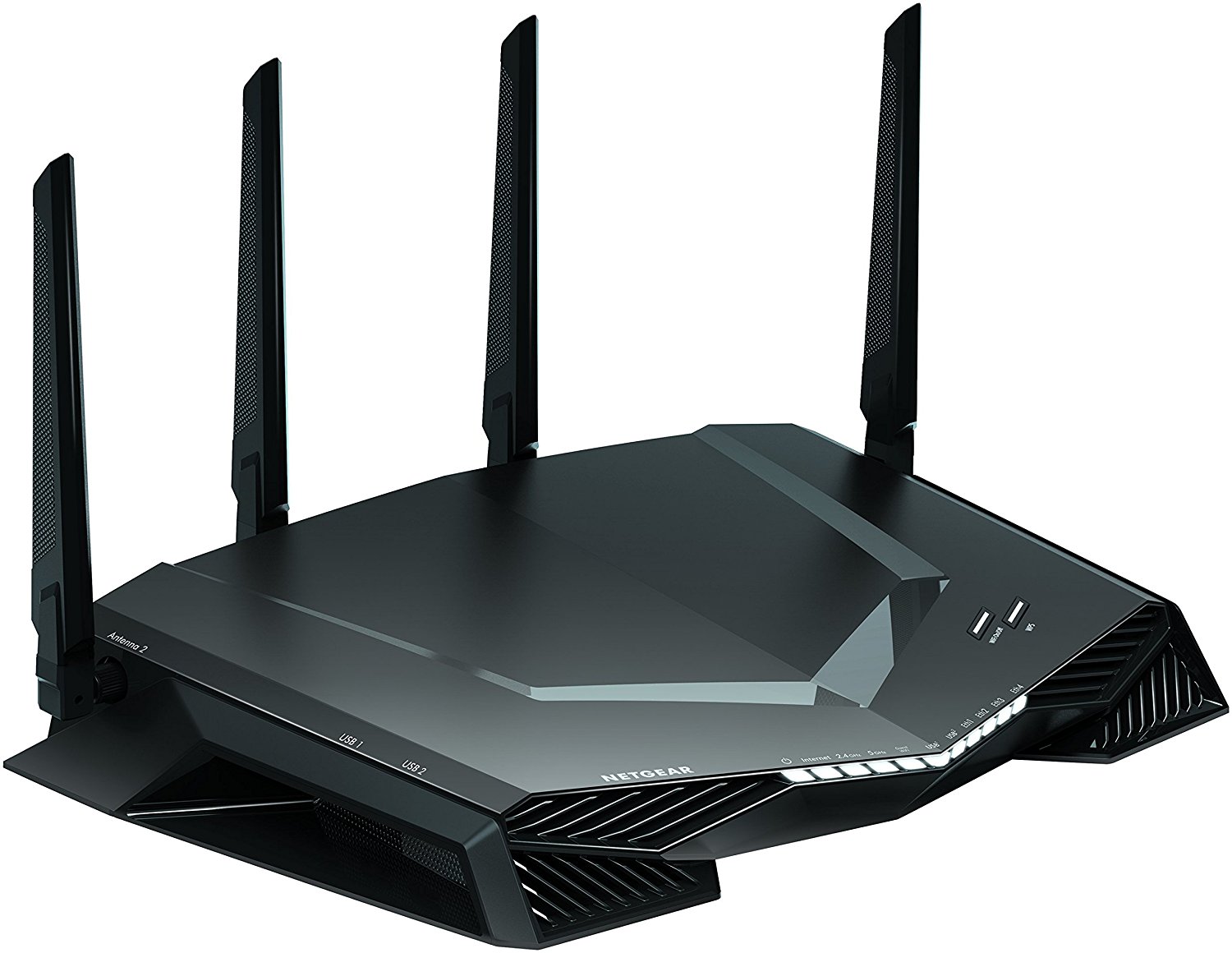 Facebook Twitter Pinterest Email
The NETGEAR Nighthawk XR500 Gaming Router promises to give gamers complete control. After using it for a few weeks, find out if it controlled lag and if it's worth the price tag.

When gaming you want no lag and fast internet. The NETGEAR Nighthawk XR500 is meant to make the most of your internet speeds and use. While I am not a heavy gamer, I do have all the latest generation consoles and many devices connected to the router. I recently upgraded to Verizon Gigabit internet service and wanted to make the most out of the internet service. Putting the XR500 Nighthawk Pro Gaming Router to the test the last few weeks this has been my experience with it. 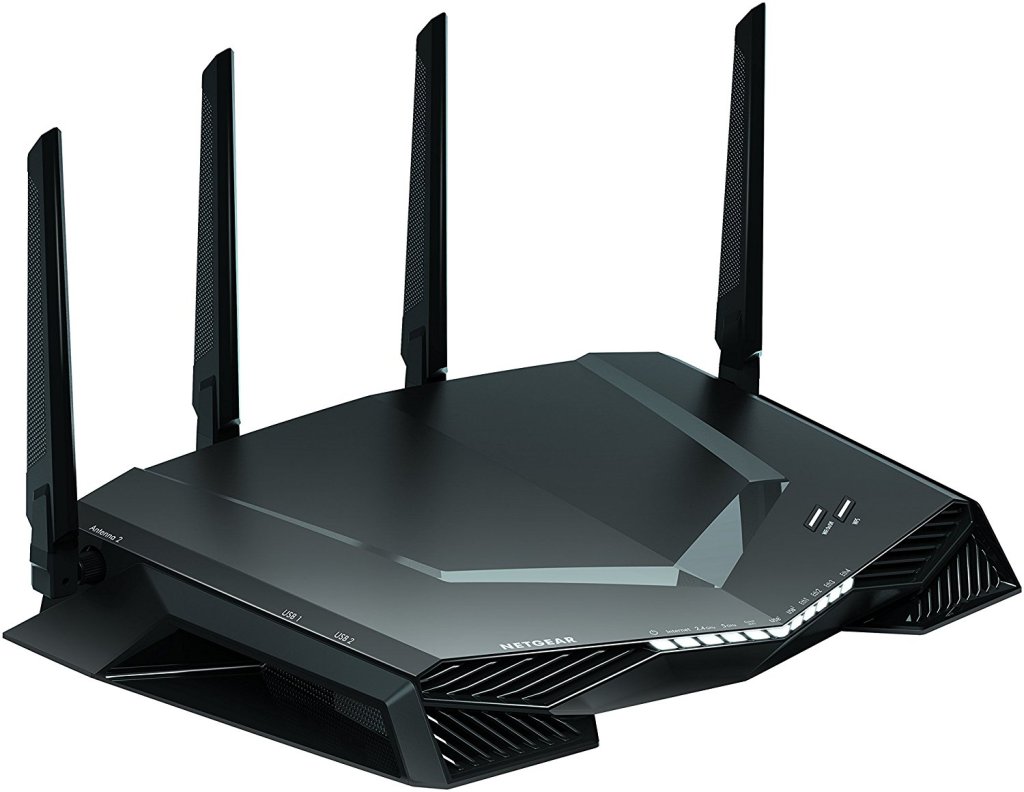 When you see the Nighthawk XR500 Pro Gaming router, it has the look of a gaming router. It’s a wide, all black router with sharp angles and 4 antennas. It’s difficult to explain the fierce look, but you can tell it’s a high-end router. I do like the black look, since most of the devices in my entertainment center and my entertainment center itself is black also. It matches. There’s no holes or threads to mount to the wall. Not a a big deal for me since I planned on shelving it anyway.
As expected there are many indicator lights on the front of the XR500. On the back there are 5 gigabit ports (four lan and one wan), the ac adaptor port. You have two USB 3.0 ports on the side for storage.. It has four antenna ports. The antennas and ports are labeled. You have to put them in the corresponding slots, or else your signal will get messed up. There’s also a button to turn off the LED lights, which I actually ended up using often. In the box you get the XR500 router, the ac adaptor, ethernet cable, and manuals.

I was honestly dreading the setup of the XR500 just because of all the features it promised. Router settings can get very complex. The Cable connection isn’t the problem. I remember setting up the Netgear Orbi, and it wasn’t so bad, so I was hoping it would be a similar process. It wasn’t bad at all. After plugging in my modem to the router, I logged into the router via browser, since there is no setup app for it. That’s when you’re introduced to the NetDuma DumaOS dashboard. But before getting into that, here’s an idea of all the things I have hooked up to my network. In the household, we have three smart TVs, 4 laptops, a 5 speaker multi-room wireless speaker system, 2 PlayStation 4s, 2 Xbox One, and several phones.

Features of the Nighthawk XR500 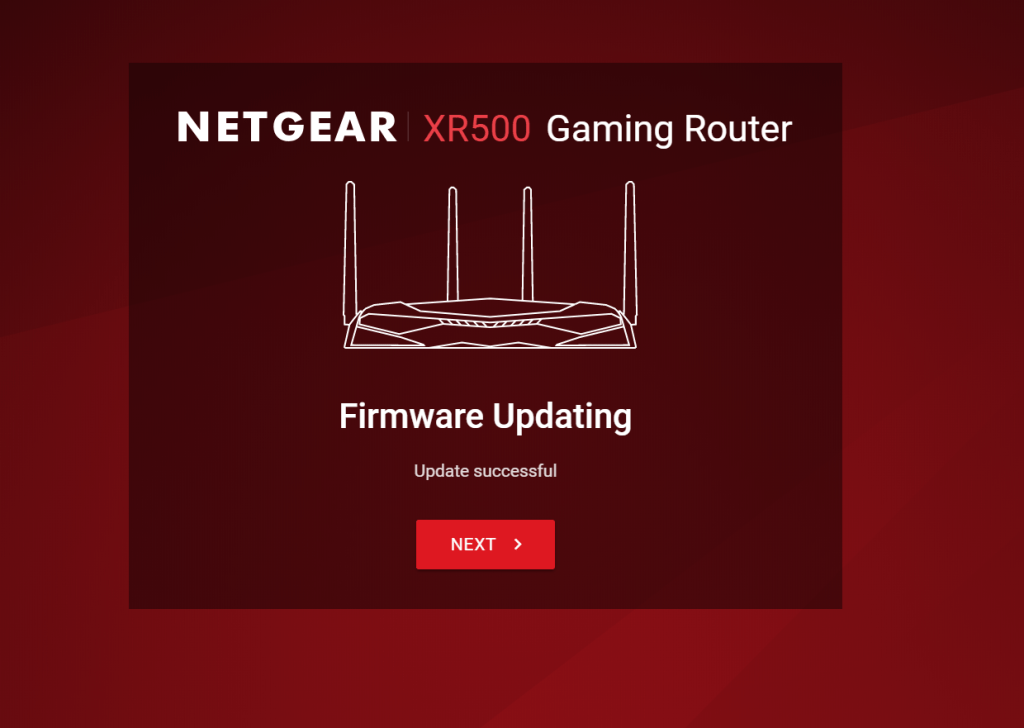 Once you’re in the dashboard, you can change the name of the network and set up your security questions. It can also detect what speeds your network is offering or you can input the speeds yourself. Instead of going for two networks (2.4 Ghz and 5 ghz), I decided to go with one name for both and have the device decide on which network to be on. There was a firmware update which didn’t take long. You can learn more about DumaOS here.

The dashboard is pretty easy to read through. For things you want to update like network names, passwords, guest networks, parental controls and more, it’s all in there. I didn’t mess with WAN and LAN settings, since I am not well-versed in those areas, so I left them as is. But if you’re more experienced with routers and their settings you can go to town with DumaOS. 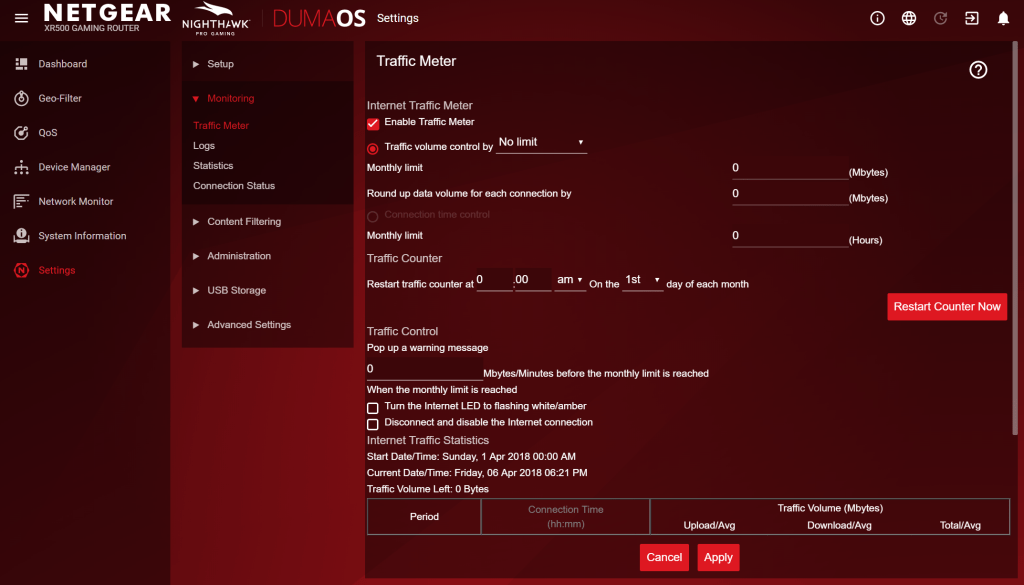 What I did enjoy seeing is what is connected to the router. It tells you what is connected and what is offline. You can see what is taking up the bandwidth. What’s even better is that you can assign bandwidth to the device you prefer. I don’t always have to use the QoS option on DumaOS. I use it when for high use times obviously. Checking the bandwidth utilization is such a dope option, and I think it’s one of the options that would be used most just because of all of the devices each person has. Right now it’s when someone is playing God of War, Starcraft on PC, and we’re streaming sports games on our laptops (ESPN on Verizon, and MLB.TV).

Like I mentioned earlier, I got the Verizon’s Gigabit service. It goes up to 940 mbps download and 880 upload. I don’t always trust the carrier routers since I they are not going to go full-out for the features and speeds. As you can see from the speed tests, I was getting great speeds (wirelessly). This is with multiple devices connected to the router and streaming videos.

Who is the Nighthawk XR500 For?

There are many people I could recommend the XR500 router to. Even though it’s labeled as a gaming router, it’s not just for those heavy gamers that can benefit from it. The router is great for those who have many devices that take up a lot of bandwidth and/ or you want to make use of your high speeds, although Netgear has other routers that are able to manage high speeds at lower prices. I figure at $300, and those who don’t have super high internet speeds, the router is not for everybody. Keep in mind the space and setup since the XR500 is not mountable. Any house with kids who game on the heavy-side would enjoy the parental controls. The tutorial on the dashboard allows you to better understand certain features. 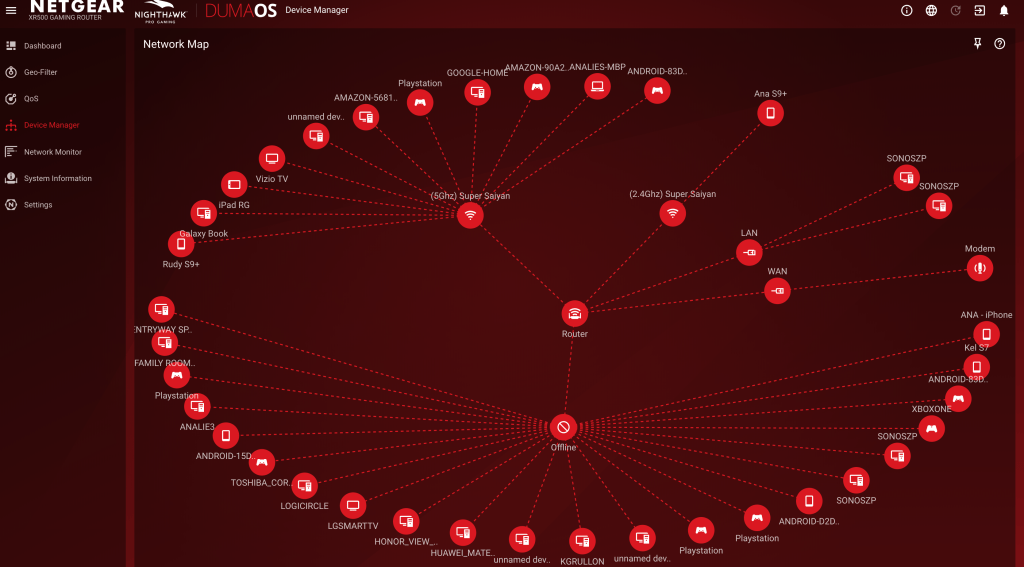 This XR500 router is greatness! Having the DumaOS for setup and control makes the price worth it, because I am also making the most out of my internet speeds. I am a fan of the OS over regular router administrative settings. NETGEAR made a router that put the gamers priorities first. Being able to customize your network easily, on your terms is always a plus. While I haven’t tested other gaming routers to this capacity, I have no complaints with the XR500. It comes through! You can game with confidence and without lag.