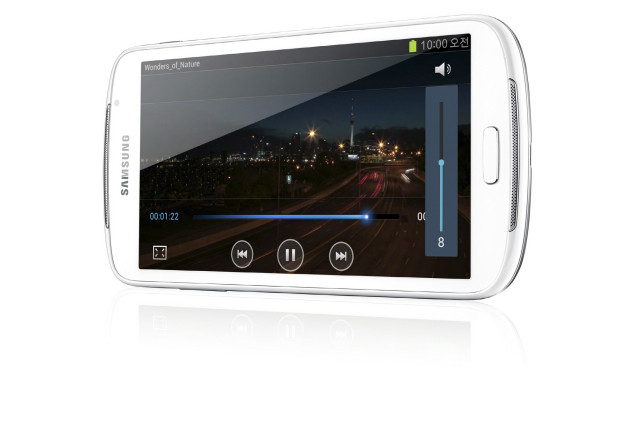 Samsung has a new media player coming out, of course you know it’s named Galaxy Player 5.8. The new device is the latest in a line of similar Samsung players with screen sizes ranging from 3.6 to 4.2 and 5 inches.

At first glance, the new Galaxy Player looks a lot like the Galaxy S III smartphone from Samsung. But the main difference is the screen, which measures one inch above the smartphone, at 5.8 inches in diagonal with a 960-by-540-pixel resolution.

The only thing that’s missing from the Galaxy Player 5.8 compared to the iPod Touch is a back camera. The Player has a front-facing VGA camera, just like the iPod, but no camera on the back. Samsung also didn’t identify the processor inside the Galaxy Player 5.8 or reveal its price or expected availability date.

Other specs in Samsung’s new device include a Android 4.0 Ice Cream Sandwich, 2,500mAh battery, a microSD card, 802.11b/g/n wireless networking, GPS support, and a built-in education portal with multimedia material such as lectures.

As of now we don’t know how much the galaxy player is going to cost It will be interesting to see what price tag Samsung attaches to the Galaxy Player 5.8.