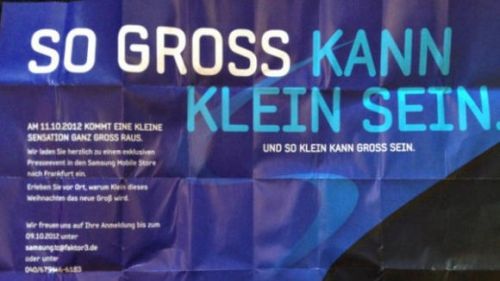 As we know I’m a huge Samsung fan, I own a Galaxy S2, S3 and galaxy note.. among other Samsung products, so when someone sent me a Press invite for a Samsung event that has been caught on camera and written in German, the rough translation would sound something like this “something small will be really big“, which is clear that we might be presented with the earlier rumored Samsung Galaxy S3 Mini.

The event will take place on October 11th so by the end of the month we MIGHT be able to buy the phone. As to what it brings to in terms of specs, a 4 inch screen with a resolution of 480 x 800 pixels, a dual-core processor and a 5 MP camera have been confirmed so far but, most importantly, this little S3 will hit the market with Jelly Bean straight out of the box.

The interesting story is that Samsung has decided to name its 4 inch gadget “Mini” and has also mentioned the word “small” in the invite. It’s as if, once again, the Korean manufacturer mocks Apple’s iPhone 5 by having the smallest screen on a high-end device, the difference being that Samsung’s Mini is not really planned to fit in the high-end market whereas the iPhone 5 is Apple’s flagship phone.

As the days come close to October 11th hopefully some other information will be leaked if not, I will have an update the day after the event.

If the Mini S3 is released will you go out and get it or stick with the big bother, the S3?