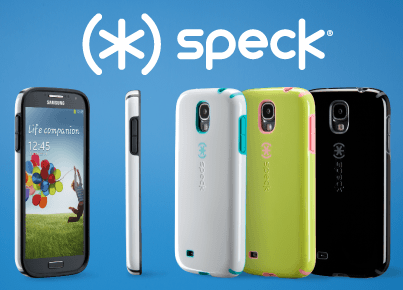 Facebook Twitter Pinterest Email
Speck has stepped up to the plate to offer stylish and protective cases for the Samsung Galaxy S 4 and the HTC One. If you're looking for just style, convenience, protection or all three features, Speck has something for every need. Check out what they have to offer...

Speck knows that the smartphone consumers had two major choices to make if they decided to upgrade their smartphone recently. iPhone is no longer the phone to have all the accessory support. Long before the official releases of the HTC One and the Samsung Galaxy S4, Speck products had a lineup of cases ready to go. THey have four cases for each phone. Speck’s most popular case, the patented CandyShell case is offered for both the Samsung Galaxy S4 and the HTC One. The shock absorbent CandyShell case offers protection without sacrificing the smartphones’ slim profiles. The raised edges help offer protection for the screen. Don’t worry about laying your new smartphone down on the screen. The buttons are also protected with rubber coverings.
Price: $34.95

BUY the Speck CandyShell Case for the HTC One

BUY the Speck CandyShell Case for the Samsung Galaxy S4 The case that’s made texters, the CandyShell Grip is great for those who have butter fingers. It offers the same protection as the original CandyShell case, but it offers ridges for extra grip. The phone will be protected with the soft inner shell and hard plastic exterior.
Price: $34.95

BUY the Speck CandyShell Grip Case for the HTC One With the smartphones having these beautiful crisp displays, we’re doing a lot more than talking on them. The Speck SmartFlex View case is for those who love watching videos on their phones. The retractable stand pops in and out easily for quick movie and video chat sessions. The SmartFlex material makes it easy to put on and off.
Price: $34.95

BUY the Speck SmartFlex View Case for the HTC One I actually have this case for my iPhone 5. It’s made of hard rubber material. On the back it of the case it has a slot that can hold a up to three credit cards. It’s very convenient at times. For example with a work phone, you can put your job credentials. There is a protective layer that separates your cards from your phone to prevent scraping.
Price: Not available yet

Speck GemShell Case for HTC One If you’re in love with aluminum body of the HTC One, you’re definitely not alone. The HTC One has been praised for its sleek build. You probably don’t want to cover it up. The Gemshell case is clear protection. Don’t cover the HTC One’s beautiful looks and don’t sacrifice its safety.
Price: $29.95