Facebook Twitter Pinterest Email
The Fitbit Surge, is Fitbit's first attempt at a sports watch. Are the features on the Fitbit Surge worth the $249 price tag? Check out the review for details.

I’ll start off by saying how familiar I am with Fitbit. I have reviewed 3 of their latest activity trackers. They all went from good to great, adding cool features and slowly evolved in build and design. The Fitbit Surge however is different from any of the previous Fitbit trackers in both features and design. Check out my thoughts with the activity tracker after several weeks with it.

When you see the Fitbit Surge, you automatically know it’s more than activity tracker. It’s an athletic watch. Some would call it a running watch (since it has built-in GPS). The watch has very thick bands. It’s the same material as the Fitbit Charge, and Charge HR. It has one button to the left of the touch-screen and two buttons to the right. The Surge closes with a buckle.
The Surge is a bit bulky because it has a heart-rate monitor and a touch screen. It sticks up from your wrist. It will be hard to tuck under a sleeve. Due to its bulkiness, the Fitbit Surge looks like a sports watch. What I mean by that is that, it’s not at all feminine (if you care about that), It won’t be easy to hide, or blend in with other jewelry. There aren’t options to change the band. It’s all one piece. 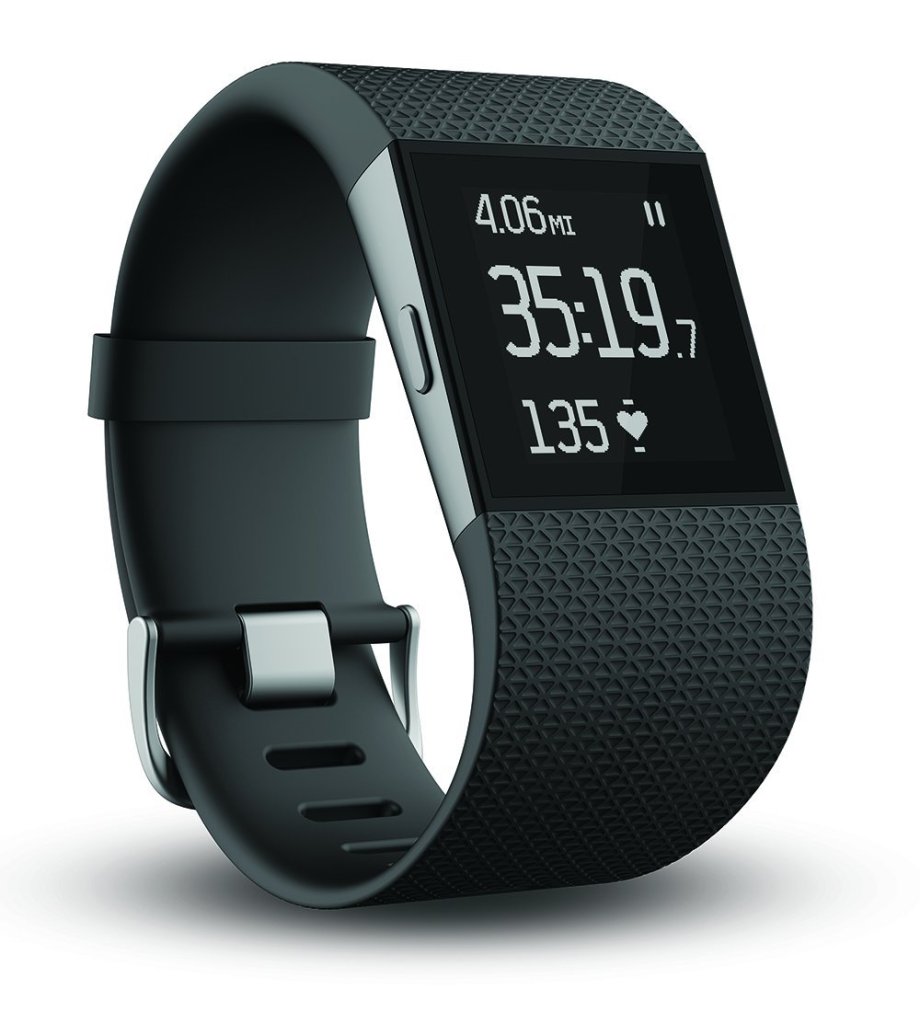 The Fitbit Surge does a lot. It tracks steps, calories, distance, floors climbed, sleep, and active minutes. Which many activity trackers do also. But the Surge also tracks, running, cycling, and a few other workouts (you have to pick them from the app). And there’s more. It also gets text and call notifications, and allows you to control your music from the screen. Those are very welcome features.
The touch-screen is just sensitive enough. You don’t need much of a gesture or pressure to swipe the screen. The display seems to work well in very light areas, and on very sunny days.

You can buy the Fitbit Surge from Fitbit.com or Amazon.com 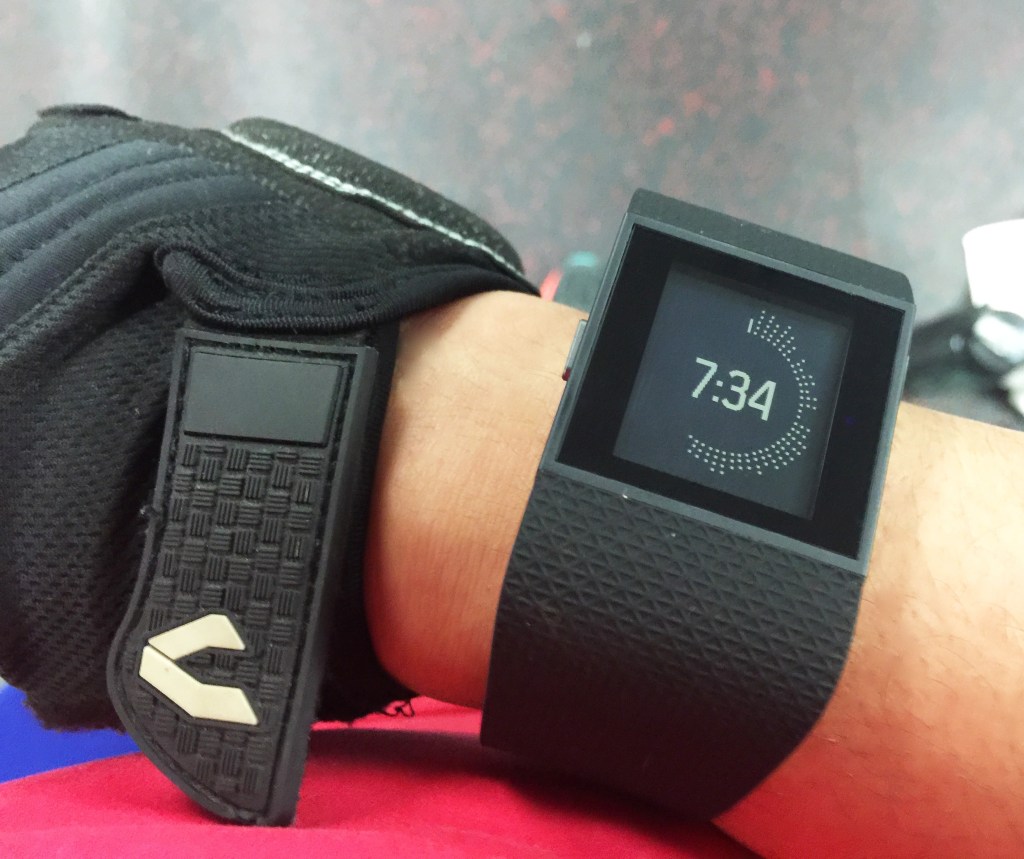 Just like previous Fitbit trackers, the Surge syncs wirelessly to the Fitbit app (one of my favorite overall Fitbit features). The app is very easy to use, and it keeps on getting better. The Fitbit app also allows you to pair more than one Fitbit at once, which is good for people like me who have multiples (but I don’t see that situation happening a lot). I’d wear the Surge to the gym and outdoor runs, and the Charge HR on the daily.
Getting text and call notifications is cool too. You will see the texting icon on the top right corner of of your screen and you can slide down to view the text. But right now there is no way to delete texts or to mark them as read, both on the Fitbit and from your phone to the Fitbit, so they just sit there. The notifications don’t always come quickly either, but for the most part they were fine.

I haven’t had previous experience with GPS-enabled watches. The Surge would lock in signal after about a minute of searching. Sometimes it would lose the GPS, and the final map  of my run wasn’t correct. This happened twice at a park in Queens. It wasn’t too far out or anything, so hopefully it gets better with an update. 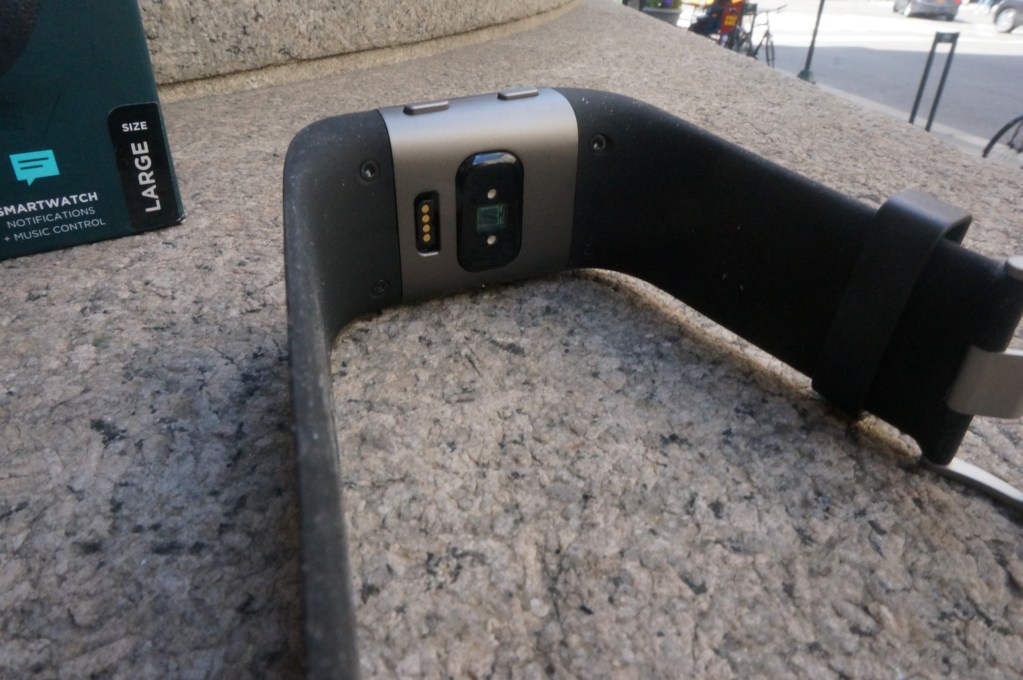 Since the heart rate monitor on the Surge is pretty much the same as the one on the Charge HR the following information is from my Charge HR review:
The heart rate monitor is supposed to help give you an idea of your workout intensity. You’re supposed to use this information to optimize your workout The Fitbit app chooses the level of the heart rate zones based on your age and weight that you put in your profile. But you can also set your custom heart rate zones in the settings. I stuck with the settings the Fitbit app gave me. Fitbit calculates your heart rate by using the formula of 220 minus your age.
When clicking in the heart rate tab of the Fitbit app, you get a line graph detailing your resting heart rate for the past 30 days. Fitbit suggests wearing your tracker to bed to get the most accurate resting (when you are still and/or calm) heart rate. below the line graph, the weeks are then broken down by days, starting with the most recent and working your way backward. You see a color-coded line graph letting you know your average resting heart rate and it changes color for the times that it was in the heart rate zones (fat burn, cardio, and peak zones). If you swipe left on the line graph, you get multi-color bar graph detailing the “Minutes in the Heart Rate Zones” in the past 30 days. 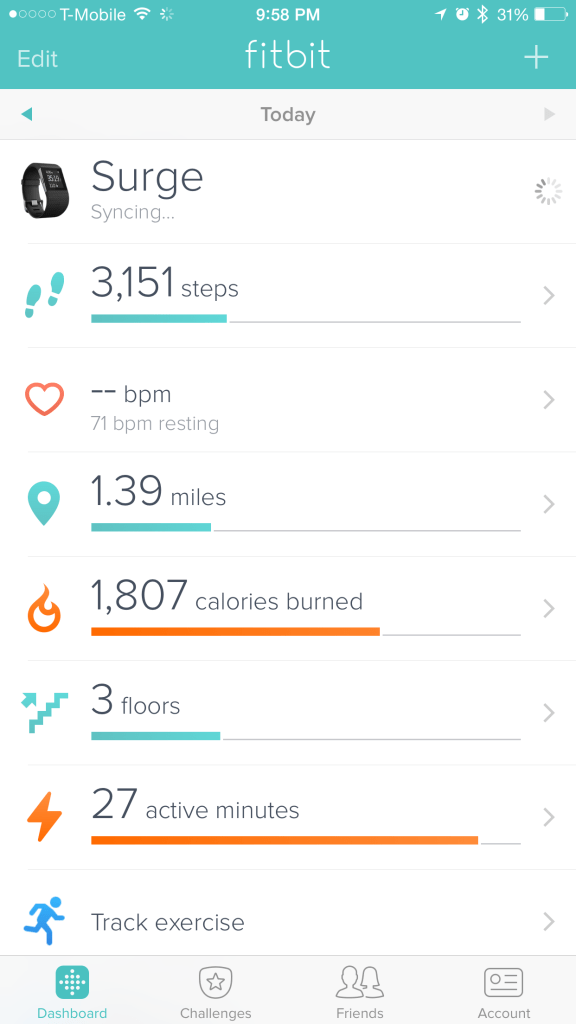 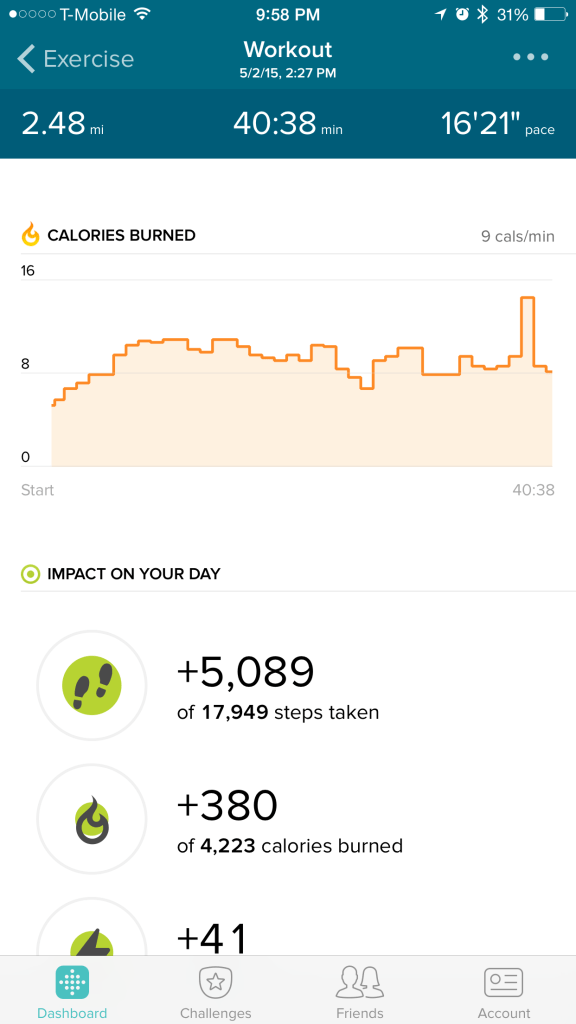 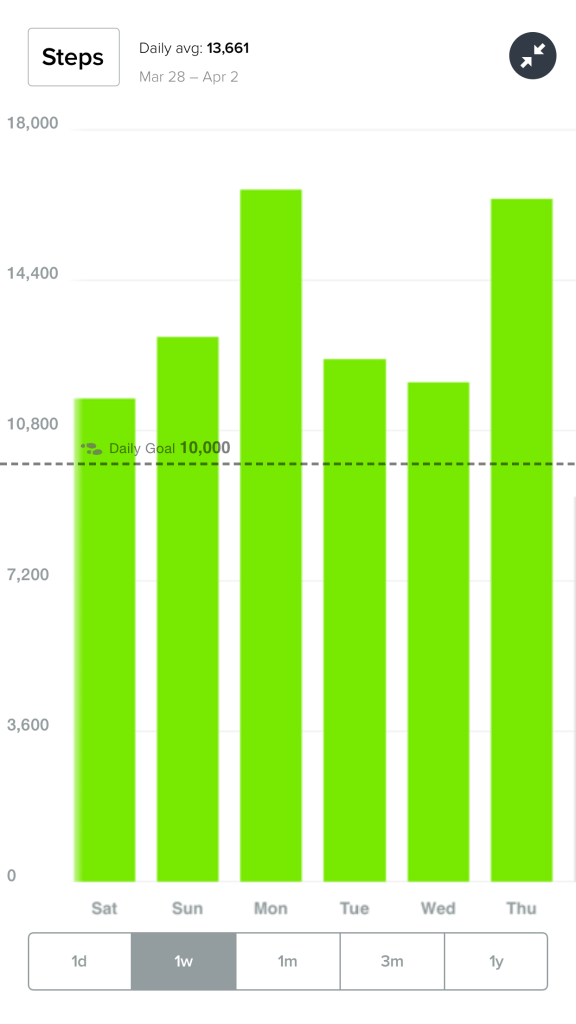 The Fitbit Surge will cost you $249.95. It’s available in 3 colors (black, blue, or orange) and 3 sizes (small, large, and X-large). You can get it from their site or on Amazon.com. It’s worth it for you if you enjoy the Fitbit app, and need to track your running via GPS. If running with a GPS isn’t too important to you, you can go with the Fitbit Charge HR, which is a great daily activity tracker.

You can buy the Fitbit Surge from Fitbit.com or Amazon.com

The Fitbit Surge is great entry-level step into running watches. As breathable and lightweight as the Surge was, it was difficult for me to sleep with and wear everyday, especially with certain dressy outfits. And of course, not wearing the Surge everyday takes away from the daily tracking you want to get from Fitbit. This is in no way Fitbit’s fault, because you can clearly see from the packaging and various pictures what type of product you’re getting. 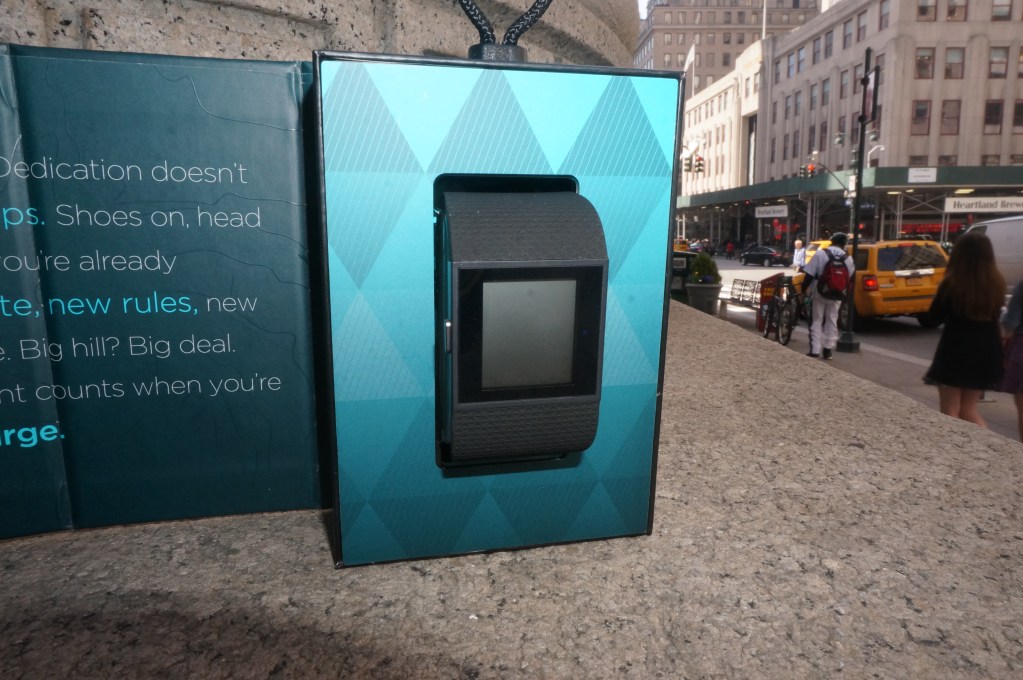 As usual, the data that you get wearing a Fitbit is motivating enough to keep you going. However, the size of the Surge wasn’t very appealing enough to wear on a daily basis. I’d often switch to the Charge HR or the mobile track (using your smartphone as a tracker). If you’re an occasional runner, you might see the GPS as an added feature, but the dedicated outdoor runner might want to take the Surge for a test run before fully committing. At $250 it may be much for a watch that isn’t precise.

It’s been a while since I’ve checked out a WearOS watch. Oppo came out with one this year that looked promising but looks arent enough. What did I think... 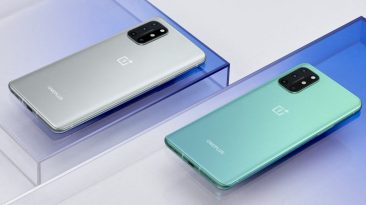 The OnePlus 8T has been rumored for weeks. The live event just finished where they discussed the specs and design of OnePlus’ latest device. OnePlus 8T Specs... 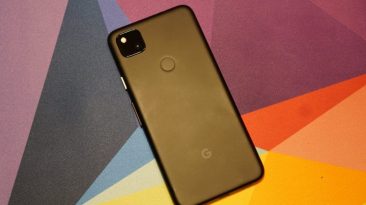 The Pixel 4a came a little late this year. Now that we spent a few weeks with it, here are 4 things you need to know about the Pixel 4a. Design and Build –...

Soundcore by Anker has a great lineup of headphones. Today they added the Liberty Air 2 Pro truly wireless earbuds to the lineup. These are the first earbuds from... 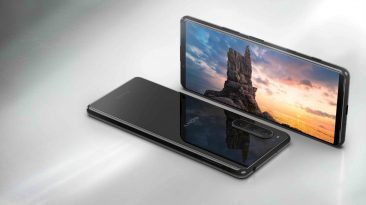 There’s a new addition to the Sony Mobile family. They have announced the Sony Xperia 5 II. The phone is compact but powerful. Check out some of the specs. Sony...