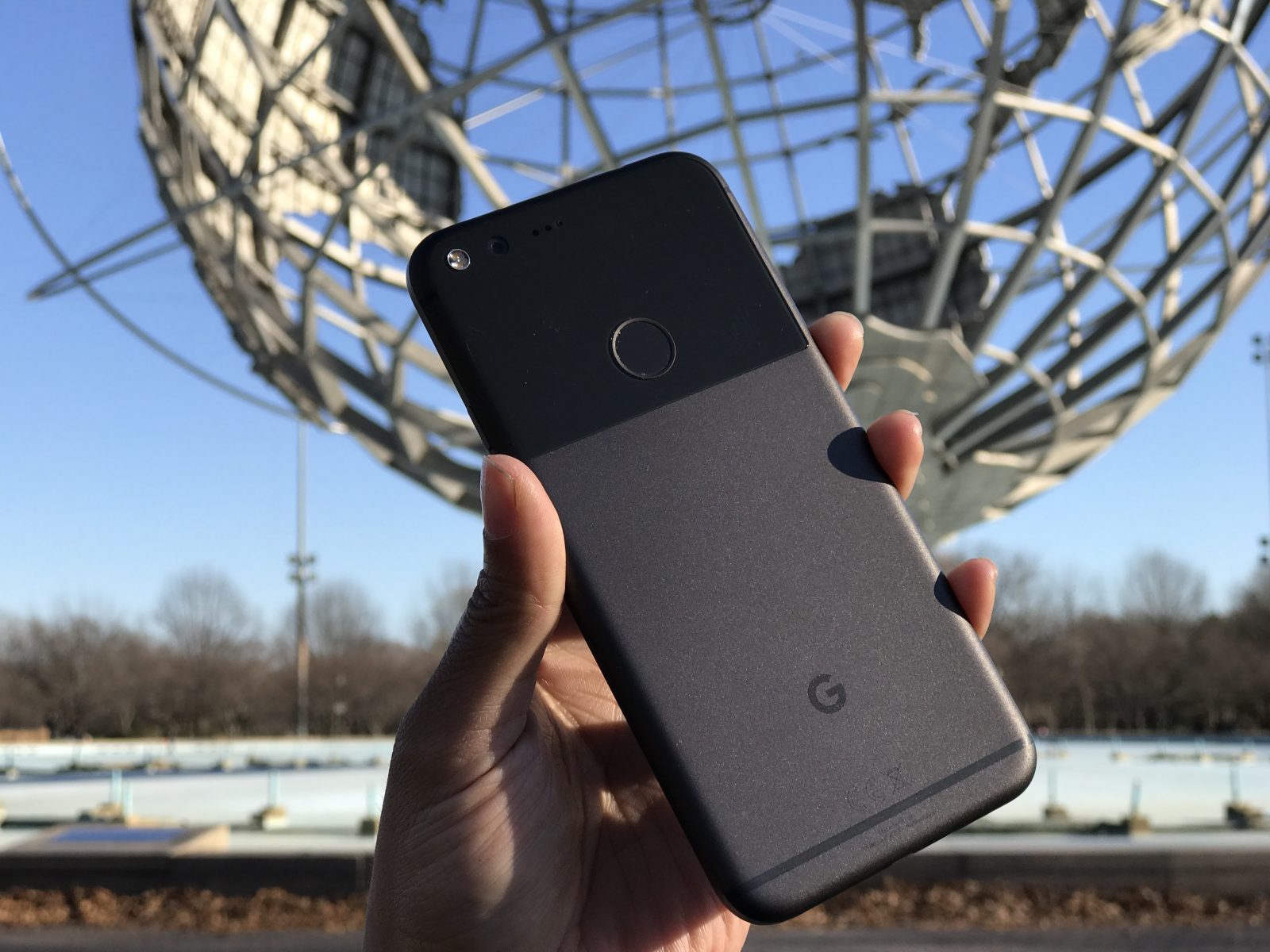 Facebook Twitter Pinterest Email
After several weeks of use how does the Google Pixel XL hold up? Is the camera really as good as Google claims? Find out in the long-term review .

I’ve been using the Google Pixel XL for a while now. With so many decent Android flagship devices is hard to say anything that makes a phone really good or really bad about them 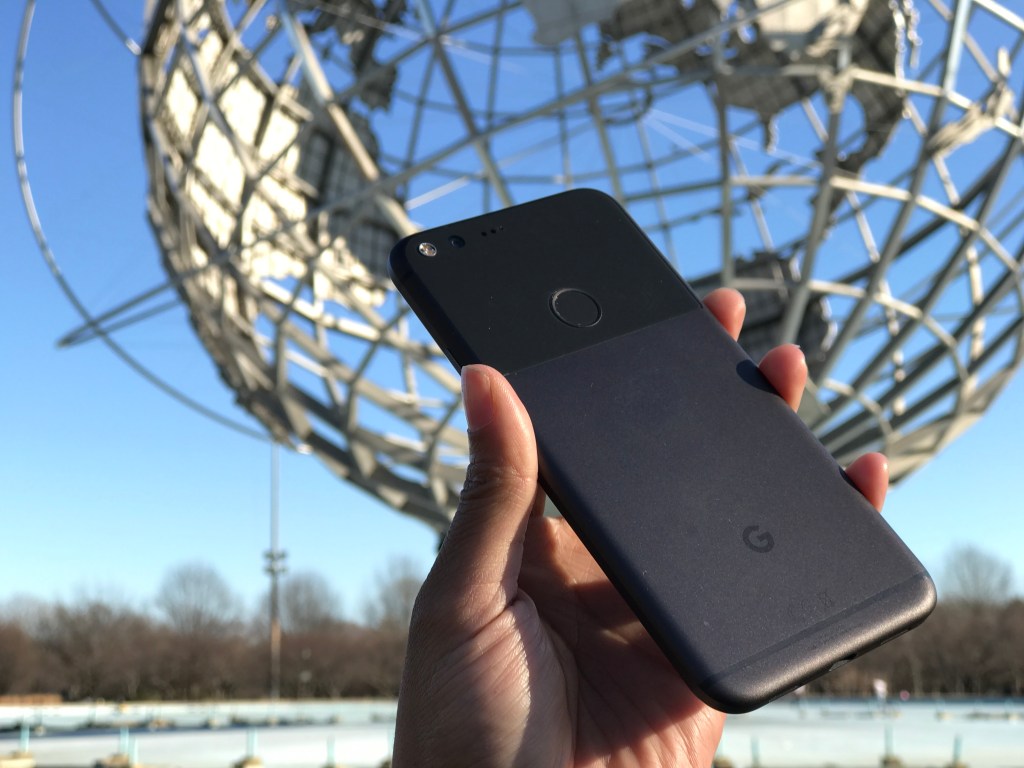 The phone feels solid. No removable battery the panel is flat and smooth. To smooth actually. The Pixel XL is super slippery. I was afraid to use it without a case the first week. The Pixel is so thin I feel it would be disastrous at the first drop.
There are no buttons on the front panel. You have the 5.5 inch display and the 8 megapixel selfie camera. ON the right border you have the patterned power on / standby button and lower on the border the volume rocker.

Check out our review of the Google Pixel 2 XL HERE 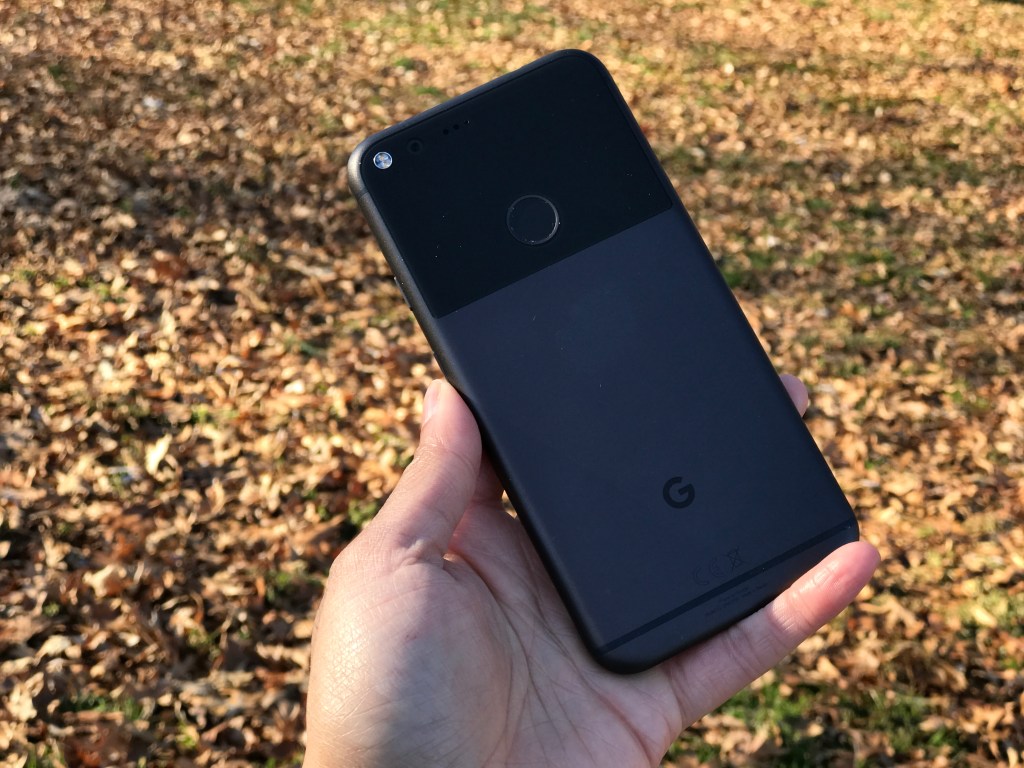 The Pixel looks very simple. On the back you have the fingerprint scanner and 13 megapixel camera with flash (no camera bump – Woot). No bells and whistles in the design. The blue color was out fast so black or white were the only options.

The phone is sitter slippery. Pop a case on it quickly. You can check out some cases here. The display is nice to look at. It has the QHD case many flagships carried in 2016 / 2017. The overall design of the Google Pixel / Pixel XL is a bit more luxurious and can hold its own in a line-up of many beautifully designed flagships.

There really aren’t any bells and whistles on the Pixel XL. The display and software are so nice. So crispy and clear. You can double-tap to wake the screen (that came after an update), but it’s not always on. It only turns on when there is a notification. The bright and crispy screen is not ideal for night-time use. Thankfully with an update there is a night-light feature to take the blue screen off.

I often use wireless headphones, but for those you like their wired headphones, you do have a headphones jack to plug into. When watching content sans any type of headphones you’re stuck with just one speaker. You might even block the speaker if you hold the phone a certain way. Definitely not the Pixel XL’s strong point.

It’s not even water-resistant. Many of you know I take serious care of my gadgets so for the most part the water-resistant feature doesn’t affect me. But there are people who are looking for this quality in 2016. Since it’s Google’s first attempt at handling software and hardware, I hope the second generation Pixel adds this feature.

The phone usually runs smoothly without a glitch. But there were a few days where the Pixel wouldn’t react to the touch or even the scanning of my finger. It would freeze on the homescreen which was super annoying and caused many “WTF!” moments. 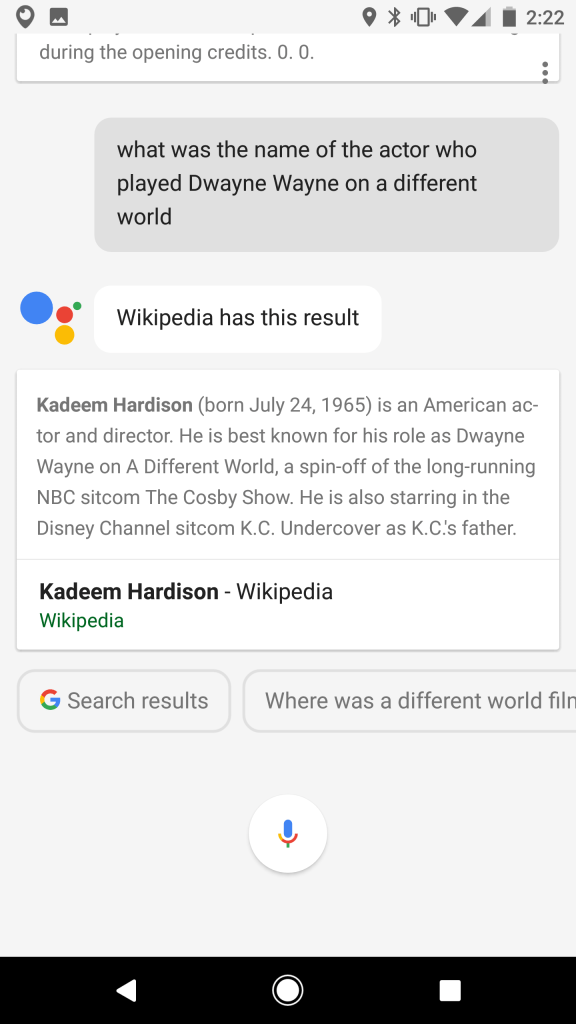 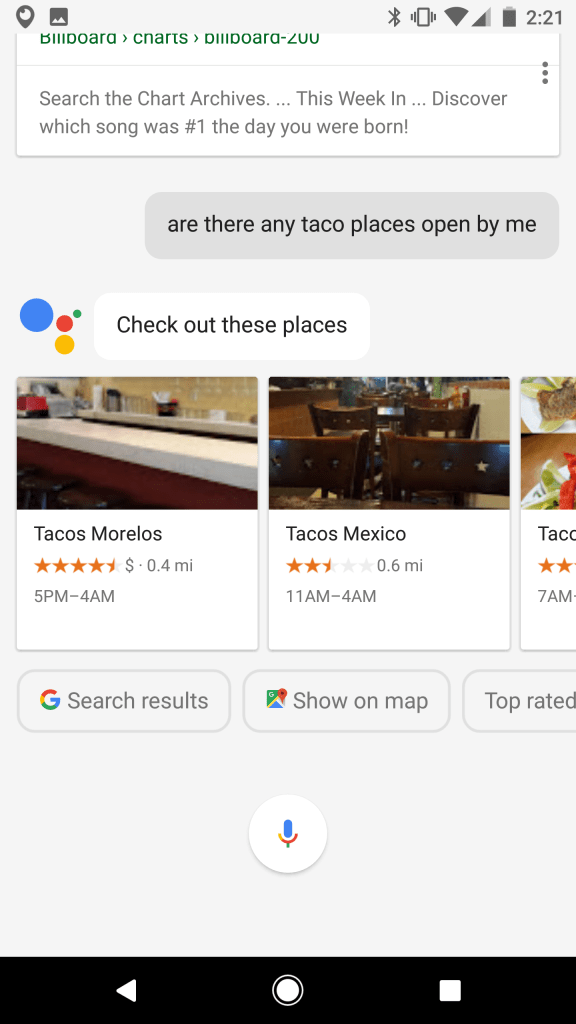 Debuting with Android 7.1 software, the Pixel XL came with Google Assistant built-in. Think of having all of Google’s answers at your fingertips. You activate it by saying “OK Google”. You can even unlock your Pixel by saying the phrase as well. The activation works even when the screen is off or when using apps. There has been a few times, when a Google Pixel commercial has activated my phone. It gets simple questions such as “What is the weather tomorrow?”, pretty well. I also asked it to find me “an open taco spot by me” and it came up with some good suggestions.

You can set it up to control your smarthome devices (it works with Philips Hue, SmartThings, WeMo, Nest and Honeywell). It gets most questions. I asked the Google Assistant what is the Unisphere, and it gave me a quick description from Wikipedia along with the link.  I also asked her about an actor on the show “A Different World” and it gave me the proper name. When I asked who was at the top of the billboard charts, she gave me a link to Billboard Top lists. 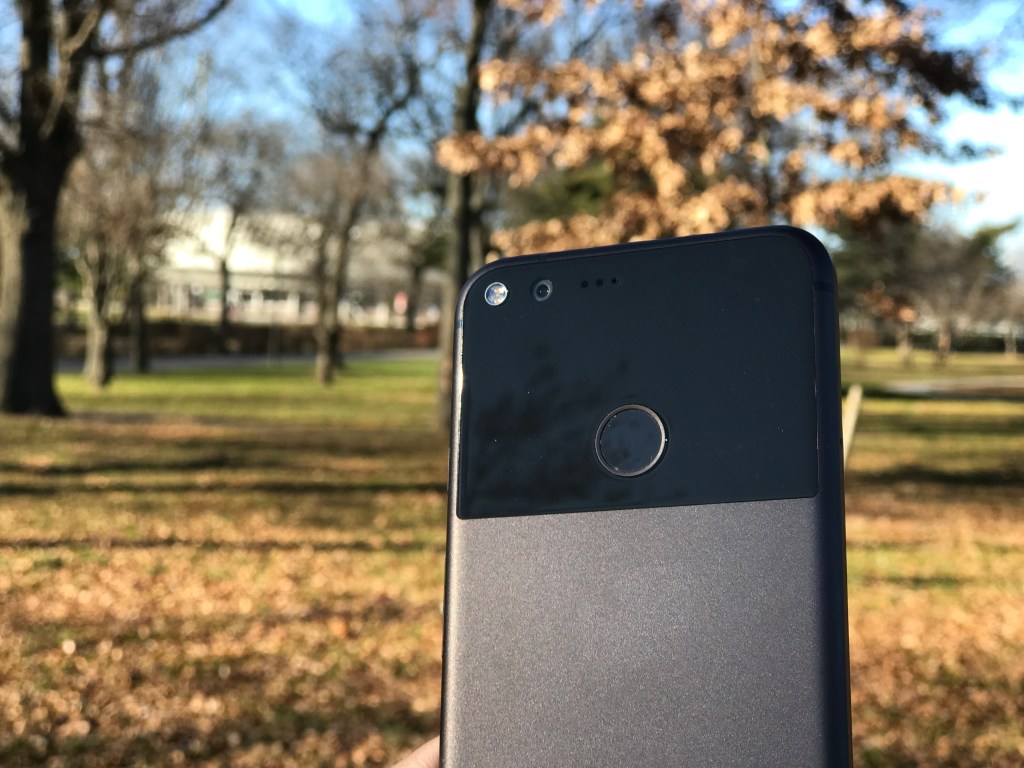 When Google announced the Pixel had the highest rated camera, (according to DxOMark) I was skeptical given the previous Nexus line’s cameras. But I started using the Pixel camera and I was hooked. Even though I think it’s rather difficult to take a bad picture with any phone released since or after 2015, I was very pleased to see you can take great pictures with nearly no effort.

The camera app opens quickly with a double click of the power button. It almost instantly auto-focuses to snap a picture. I do wish the shutter was a little faster. I’ve missed a shot or had a couple of blurry “moving” pictures. I do wish it had optical image stabilization (OIS). The pictures have a “natural look”. Rarely do you see over-saturation, or bad exposure; yet you still get lots of detail. “Lens Blur”, where you get the Bokeh effect, is one of my favorite features. It’s not always easy to capture. You can check out some of the pics in the slide show and some more HERE and HERE.

The embedded 3,450 mah battery has been amazing. Even after several weeks of use and all types of apps, the Pixel XL lasted a full day. This includes my daily use of many social media apps, tons of picture-taking, and of course chatting.

Google also announced their Daydream VR headset. While VR has become popular in theory. There are more apps available and lots of YouTube 360 video content; I can’t use it for more than 30 minutes continuously. It’s not only because it tires my eyes and I get dizzy, but also because the phone overheats a lot. Feeling that heat in your face. It definitely does kill your battery as you would expect but luckily the Pixel XL has a large battery to take on the job. At the affordable price tag of $79, the Daydream VR headset is an affordable way to introduce yourself to VR world.

It’s still a bit difficult to find the limited edition “Really Blue” color. It has been out of stock since launch. The Pixel and Pixel XL pricing is a lot higher than Google’s previous Nexus line. The smaller size (5 inch display) Pixel starts at $649 and the Pixel XL starts at $749 from the Google Play Store ( You can finance these payments from $649 or $27.04/month for 24 months with Google Store Financing*). You can also get it from Verizon Wireless. The Pixel line is no longer the affordable “Pure Android” line of phones. You can also get the Pixel XL from Verizon Wireless. You can finance it for as low as $32.08 per month. Verizon also carries the Daydream VR headset as well.

The camera and battery life make the Pixel XL a go for me. As a person who walks around snappin’ pics and chatting all day; these features are essential. I am hoping for a price drop in the near future so others can enjoy pure Android. The Google Pixel XL is a great case of less is more in the build, but you are definitely making up for it in the price point.